How to reduce half-life of caffeine?

Caffeine has a typical half-life of 5–6 hours, but some of us take much longer to metabolize it (1 cup of coffee at breakfast can leave me sleepless that night).

I know I can cut the caffeine's half-life in half by taking up smoking, but that's not a reasonable solution. ("Smoking tobacco increases caffeine clearance by 56%" — Caffeine - Wikipedia)

Other than that, I haven't been able to find anything that can speed up the caffeine elimination. Are there any foods, drugs, etc. that have this effect?

(I'm not asking for personal medical advice; simply using myself as an example.)

TLDR summary of what I found:

There is a more extensive list of caffeine-drug interactions in Pharma. Rev., but few drugs shorten the half-life of caffeine, mainly some (but not all) proton pump inhibitors ("heartburn" drugs) like Omeprazole (−41%) and Cimetidine (−31%). (I think PPIs like Omeprazole are generally available without prescription.)

The selective serotonin reuptake inhibitor fluvoxamine is a very potent inhibitor of the liver enzyme CYP1A2, which is the major P450 catalysing the biotransformation of caffeine. [...] During fluvoxamine, the median of the total clearance of caffeine decreased from 107 ml min-1 to 21 ml min-1 and the half-life increased from 5 to 31 h

31 / 5 = 6.2 so they almost used this study as a ref, but misinterpreted the direction of the effect.

Omeprazole has previously been shown to induce hepatic cytochrome P4501A2 activity, as evidenced by an accelerated N-3-demethylation in the 13C-[N-3-methyl]-caffeine breath test [...]

A review of PPIs (see table 3) confirms this with additional studies, i.e. there is indeed increased/faster caffeine clearance on Omeprazole.

The Pharma Rev source alas also claims that some anti-psoriasis / anti-eczema drugs decrease caffeine half-life, listing Methoxsalen (−70%) and 5-Methoxypsoralen (−31%)... but again that seem to be an error because a primary study I found says:

During the period of maximum inhibition the mean elimination half-life of caffeine increased from 5.6 hours at baseline to 57 hours after administration of methoxsalen

And likewise for 5-methoxypsoralen.

There is a much longer list of drugs that increase the half-life of caffeine though (presumably mostly by competing on the P450 pathway). I would not be surprised if some foods do the same (given the known interactions between e.g. grapefruit and some drugs), but I couldn't find any data specific to foods and caffeine, except for grapefruit, which does increase caffeine half-life too.

From an older (2000) review on the same caffeine-drug interaction issue, it seems indeed that Omeprazole is the only drug with such a significant effect (well included in the review): 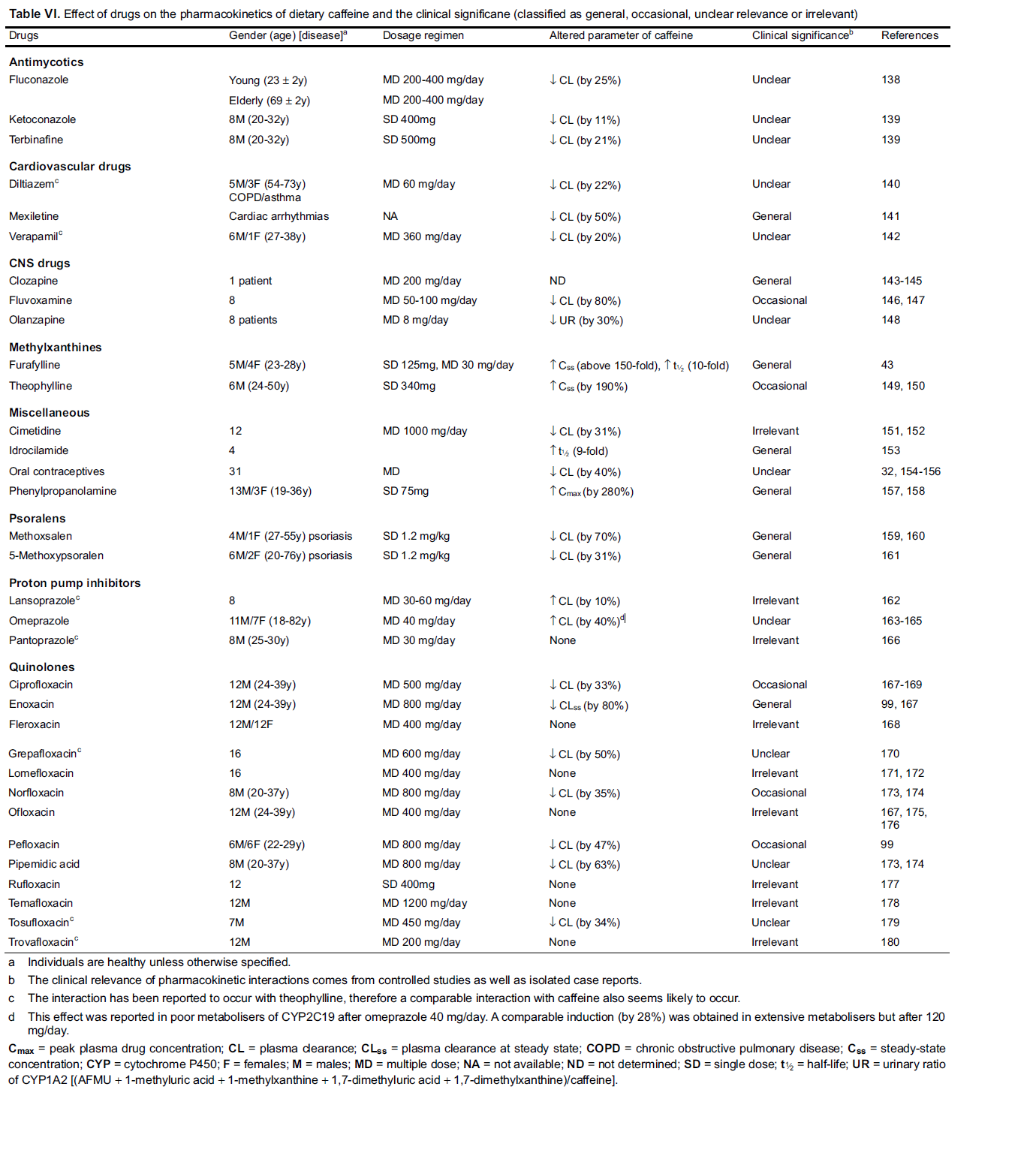 In fact that 2000 review lists Cimetidine in the opposite direction than Pharma Rev, which actually seems to be the correct one.

Cigarette smoking accelerates the metabolism of certain drugs, particularly those primarily metabolized by cytochrome P450 1A2 (CYP1A2) and, to a lesser extent, CYP2E1 and some UDP-glucuronosyltransferases [1, 2]. The induction of CYP1A2 is mediated by binding of polycyclic aromatic hydrocarbons of the tobacco smoke to the aryl hydrocarbon receptor (AHR) with consequent transcriptional activation of the CYP1A2 gene. Furthermore, CYP1A1 and CYP1B1 enzymes are induced by tobacco smoking via AHR in various human tissues such as lung and placenta.

PAHs are carcinogenic and don't seem to have any uses as drugs.

The 2011 study itself looked at whether nicotine itself contributes to this effect on caffeine clearance, but the contribution from nicotine seems to be nonexistent (or at least undetectable after 8 days of dosing with nicotine.)

There was no significant influence of nicotine administration on the pharmacokinetic parameters of caffeine or the formation pharmacokinetics of paraxanthine, theophylline and theobromine. Since caffeine metabolism to paraxanthine is a specific probe reaction for CYP1A2 [13], it can be concluded that CYP1A2 activity is not affected by 8 days of nicotine dosing. Although previous studies in experimental animals have provided evidence for the role of nicotine in the induction of CYP1A1 and CYP1A2 enzymes [4–10], our study disproves the hypothesis that nicotine induces CYP1A2 activity in humans in vivo. The discrepancy between human and animal data may be explained by tissue and species specific expression patterns. The human caffeine phenotyping probes the hepatic CYP1A2 activity, whereas the animal studies are mainly on extrahepatic CYP1A1 induction or based on methods not capable of differentiating between CYP1A1 and CYP1A2 enzymes.

Now on the ARH angle, it seems that Omeprazole also works this way with regard to caffeine (being listed in a review on the receptor), but the evidence is pretty muddy (or at least was in the year 2003 when that review was written):

Interestingly, some chemicals have been identified that can induce AhR-dependent gene expression, yet they reportedly fail to competitively bind to the AhR (Table 1 [first entry there is Omeprazole]). It has been proposed that these chemicals are not AhR ligands themselves, but that they can activate AhR-dependent gene expression indirectly, either via metabolic conversion into a ligand or by their ability to affect some cellular pathway that results in AhR activation. These conclusions are difficult to reconcile, especially given what is known about the AhR-dependent mechanism of gene activation. Although these weak inducers have not been observed to competitively bind to the AhR, they may still be AhR ligands, albeit ligands that bind with relatively low affinity. Demonstration of the ability of weak ligands (Kd in the uM range) to competitively bind to the AhR in standard binding assays is technically challenging, especially given the extremely high AhR binding affinity of TCDD [Kd in the pM range (143)]. Recent modifications of the AhR ligand binding assay that favor competitive binding by weak AhR ligands (i.e., reduction of [3H]TCDD and increased competitor concentration) have been used to demonstrate that carbaryl, previously reported to not bind to the AhR (144, 145), is actually a weak AhR ligand (146). The 300,000-fold lower potency of carbaryl, as compared to TCDD (146), likely explains its inability to competitively displace [3H]TCDD from the AhR ligand binding domain using the ligand binding assay conditions described by those investigators. In addition, the competitive binding of Trp metabolites (namely tryptamine and indole acetic acid) and several benzimidazoles (omeprazole, thiabendazole, albendazole, and fenbendazole) has also been observed (87, 147), even though these chemicals were previously reported to induce AhR-dependent gene expression in a ligand independent manner (148–151). Not only are these binding results consistent with what is known about other CYP1A1 inducers and AhR activators, but it is likely that many (if not all) of the other chemicals that reportedly induce in an AhR-independent manner (Table 1) are actually weak AhR ligands. The absolute requirement for the AhR in the chemical-inducible response, combined with the demonstration that some “ligand independent” inducers actually bind to the AhR, raises questions as to the existence of these proposed alternative induction pathways. Unlike other ligand-dependent receptors (i.e., steroid hormone receptors) that can be activated in a ligand-independent manner by processes such as phosphorylation (152, 153), ligand-independent activation for the AhR remains to be confirmed.

And on other sources of ArH ligands, particularly dietary, it notes that:

The formation of relatively potent AhR ligands from precursors that have little or no AhR agonist activity is significant, especially considering that most dietary ligands are themselves relatively weak AhR ligands/agonists. Flavonoids, including flavones, flavanols, flavanones, and isoflavones, represent the largest group of naturally occurring dietary AhR ligands. Although the majority of these natural plant products are AhR antagonists (43–47), numerous agonists, such as quercetin (48), diosmin (49), tangeritin (50), and tamarixetin (43), have also been identified. In addition to interacting with the AhR, many of these flavonoids are also substrates for CYP1A1 (51). These chemicals are widely distributed in dietary vegetables, fruits, and teas (52–55), and flavonoid levels in human blood have been reported to be in the low uM-range (56–58), concentrations sufficient to inhibit/activate the AhR. Thus, it is not surprising that crude extracts of a large number of different vegetables, teas, fruits, and natural herbal products have AhR agonist and/or antagonist activity (59, 60). Thus, plant-derived materials appear to commonly contain AhR ligands or products that can readily be converted into AhR ligands, and as such, they are perhaps the largest class of natural AhR ligands to which humans and animals are exposed.

So it seems somewhat plausible that some dietary sources of such ligands might have a similar effect to PAHs on caffeine clearance, but insofar I haven't found some specific studies on the interaction in the direction of increased clearance. Actually, there's one study in the opposite direction that we might have hoped for:

There is actually one year 2000 study on diets and CYP1A2 activity, as measured by excreted caffeine metabolites. It found that adding brassica vegetables (specifically, they added broccoli, cabbage, radish sprouts, and cauliflower) to a diet increased caffeine metabolism (by some 18-37%), while apiaceous vegetables (carrots, parsnips, celery, dill and parsley) had the opposite effect by 13-25%. (Exact measure depends on the metabolite.)

It also notes that furanocoumarins are probably responsible for the latter effect, in common with that observed with citrus fruits and caffeine, while for the increased caffeine clearance on brassica vegetables, they suggest glucosinolates are responsible. (There's an older study adding just broccoli, which found the same effect. The broccoli-only study was also replicated.)

Not the answer you're looking for? Browse other questions tagged caffeine metabolism or ask your own question.

3
Does caffeine reduce mass gaining by accelerating metabolism?
2
How can caffeine cause nausea?
0
Getting rid of caffeine addiction
3
Mechanism of action (MOA) of Caffeine
6
Should people with tachycardia avoid caffeine?
1
Does L-theanine increase caffeine's half-life?