Is there a relationship between slope of the plasma concentration-time curve and addictiveness?

I've been reading about addiction medicine, and a lot of the discussion on pharmacokinetics seems to imply a truth that is never actually stated in words.

Note for the pedants: there are medications broken down with other kinetics profiles, for example alcohol is broken down following zero-order kinetics, so the elimination phase just looks like a downward sloping line with no curve to it.

The slope of the curve during the absorption phase indicates how quickly the medication reaches peak plasma concentration ("kicks in") after administration. The text seems to imply that the greater this slope, the more addictive a substance is likely to be. Of course there are countless other contributors to addictive potential, but given, for example, two variants of the same drug, that is to say two formulations with the same active ingredient in the same dosage, if the active ingredient happens to be addictive, the formulation with the greater slope during the absorption phase will be more addictive.

Is this the case?

It appears that there is indeed an association between pharmacokinetics and development of addiction to psychostimulant drugs.

First, as a general note, it should be noted that pharmacokinetics govern a drug's plasma level, while pharmacodynamics govern the body's response to the drug (i.e. to the drug's plasma level), and in this case, addiction may be thought of as a pharmacodynamic concept, since it is the result of activation and modulation of certain receptors in the central nervous system (more specifically, in the mesolimbic system). These two concepts - pharmacokinetics and pharmacodynamics, or PK-PD for short - when combined together, give the full picture of the relationship between the body and the drug as effect over time, from first contact to biological response. 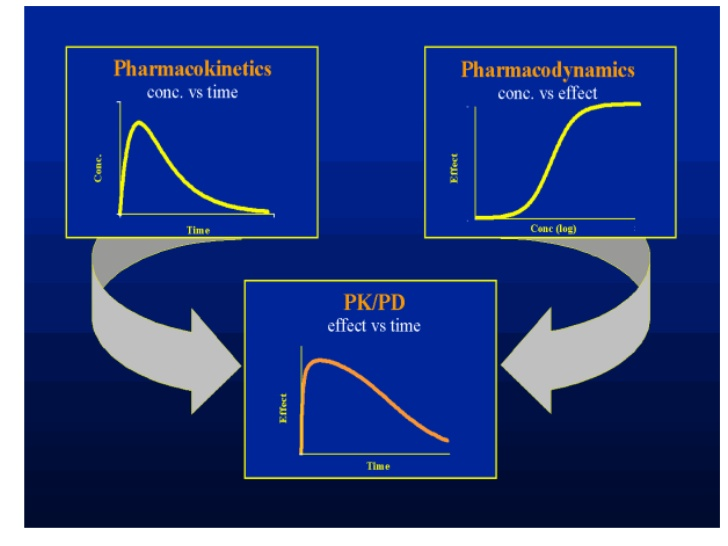 Another general note is that PK-PD relationship is not always simple to evaluate and explain and is not always 'linear', in the sense that the body's response does not always directly reflect the plasma level of the drug, and vice versa. Therefore, we must not simplify the discussion by saying that the steeper the slope (i.e. the faster the absorption of the drug), the more addictive the drug is, or in other words, the rate of absorption is not the only, and may not even be the primary, factor in determining addictiveness of a drug. Addiction is a multi-factorial condition, based on genetic predisposition, social factors, etc. as well as pharmacokinetics (source). 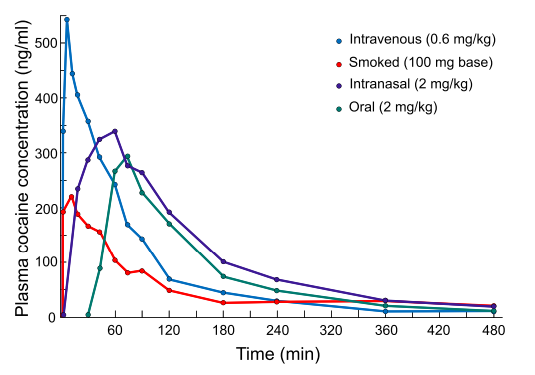 Thus, common non-oral routes of administration such as IV infusion, intranasal administration (snorting) and smoking all allow the drug to reach the general circulation quickly through small blood vessels in the nose and lungs, or directly, as in the case of an IV infusion. Once a drug reaches the general circulation it quickly reaches the brain (provided its molecules are able to penetrate the blood-brain barrier), and it has indeed been found that rapid routes of delivery increase the risk for developing an addiction. To quote from a very comprehensive review, which deals with that subject precisely:

That review and the sources cited in it (especially those mentioned in the cited paragraph above) will probably provide enough evidence for this association.

Not the answer you're looking for? Browse other questions tagged medications addiction or ask your own question.

10
What is the earliest research indicating tobacco products are addictive and/or harmful to the users health?
2
What is difference between loprox and antifungal cream?
-1
Why has the number of medication errors increased by 463% between 2010 and 2016 in the US?
2
Are there any significant differences between Triceba and Toujeo?
6
What is the amount of caffeine in the human body over time?
2
Relationship between biological half-life and duration of action of a drug
3
Is there an interaction between methamphetamine and dental anesthetic?
3
Why is prothrombin time used to monitor warfarin and not aPTT?