How/when can a doctor say that someone will no longer transmit Covid?

This may sound like yet another anti-trump post, but, really I am more concerned for my own health, and that of my family. He is just an easily accessible example (feel free to migrate this to a medical site, if we have one). Inevitably, some whom we know have succumbed, and we are concerned about meeting them.

WASHINGTON (AP) — The White House doctor said that President Donald Trump was no longer at risk of transmitting the coronavirus but did not say explicitly whether Trump had tested negative for it.

Then how can it be said that he can no longer transmit it? How am I to decide whether to allow others into my home, if they have not tested negative (or, even if they have)?

In a memo released Saturday night by the White House, Navy Cmdr. Dr. Sean Conley said Trump met the Centers for Disease Control and Prevention criteria for safely discontinuing isolation and that by “currently recognized standards” he was no longer considered a transmission risk.

Does anyone here know what these "current standards" are? Could you please provide a link? Thanks.

Some medical experts had been skeptical that Trump could be declared free of the risk of transmitting the virus so early in the course of his illness. Just 10 days since an initial diagnosis of infection, there was no way to know for certain that someone was no longer contagious, they said.

Ok, this part is trump question. I believe that that was the initial announcement. Is there any public record of the initial diagnosis? Just curious, as a side question.

Back to the important stuff - can you tell me whether someone is considered no longer a transmission risk after X days from the start or the end of their covid infection? I imagine that it would be from the end, but would like confirmation - especially as to the value of X.

Patients with mild to moderate illness who are not severely immunocompromised:

Note: For patients who are not severely immunocompromised1 and who were asymptomatic throughout their infection, Transmission-Based Precautions may be discontinued when at least 10 days have passed since the date of their first positive viral diagnostic test.

Patients with severe to critical illness or who are severely immunocompromised1:

A test-based strategy is no longer recommended (except as noted below) because, in the majority of cases, it results in prolonged isolation of patients who continue to shed detectable SARS-CoV-2 RNA but are no longer infectious.

So it appears that a mostly time-based decision is supported by the CDC guidelines. But there are some important conditions here that are not based on the duration of the illness alone, but on the symptoms and the severeness of the illness.

In the case of Donald Trump we simply don't have all the information that is necessary to apply these guidelines.

Here is a nice graphic that aggregates data from CDC & WHO that demonstrates the stages of Covid19 progression.

Note, however the persons may continue to test positive well after infectiousness ends (up to three months).

As it applies to Trump, we do not know when he was exposed, nor do we know when his last negative test occurred prior to his first positive test. Similarly, we do not know if he has tested negative since returning from Walter Reed (although I would be very surprised if he has had a PCR negative result yet). 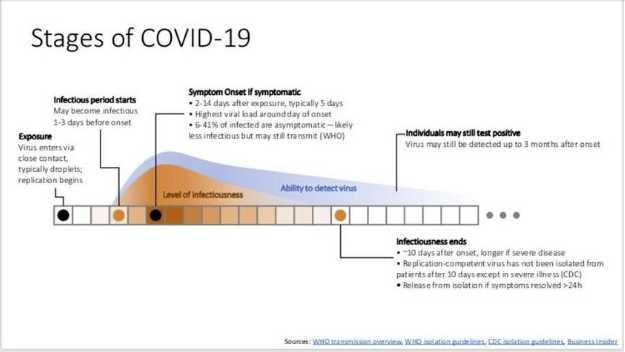 5
How can one predict whether an individual infected with the SARS-CoV-2 virus will be asymptomatic?
21
What is the main way COVID-19 spreads?
4
What would count as definitive proof that humans can develop COVID-19 immunity?
2
Is there a graph over time of Covid-19 test positivity rate in the US?
1
What is the principal goal in pooled COVID-19 testing?
4
Could the COVID-19 vaccine adversely impact healthy protein reception?
1
Can vaccines cause side effects that the virus itself will not cause?