Meaning of the word "term" in a psychiatry article (depression biomarkers)

From Prognosis and improved outcomes in major depression: a review 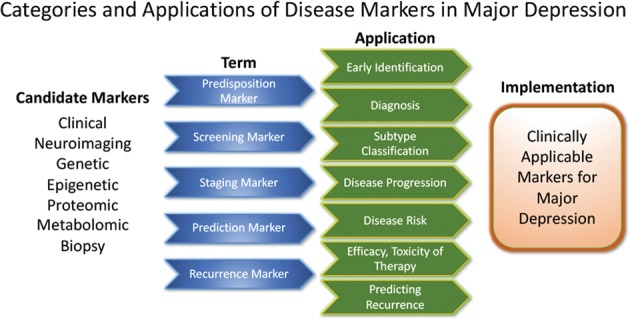 I don't understand the meaning of term - does it have the "time meaning" (particular stage in the course of disease) or the "terminology meaning" (a particular set of markers would be called "predisposition markers" and so on)?

I'm not a native speaker so it's sometimes ambiguous for me.

From the context, it seems like it has the "time" meaning, but I don't think it really matters, you could remove the candidate markers/term/application/implementation headers and not really lose any information in the figure.

That column is just showing that you could use a marker to identify people predisposed to a disease, or to screen people to find out who might have the disease now, or in people who are already diagnosed, to determine severity ("staging marker"). These are all occurring at different "times" relative to diagnosis.

That said, the figure overall seems confusing and not all that useful. The different columns are in no way orthogonal to each other, there is a lot of undefined overlap. It really seems like just a terminology dump. The final column is totally useless, it's basically just the title re-stated as "implementation". It looks to me like something you'd expect to see in a slide show presentation where the presenter just says "oh trust me, there's a lot going on and it's very complicated!" and then skips on, but the diagram itself doesn't really hold up to further scrutiny.

Not the answer you're looking for? Browse other questions tagged terminology depression or ask your own question.

5
Is there a term for depression that is not persistent?
4
What are the symptoms of depression/ OCD / suicidal depression? How we can identify a person by his behavior?
0
Meaning of "correlates" in ".. clinical therapeutic studies of LAC in depression and TRD and its correlates .. "
2
What is the medical meaning of "course"?
0
What is the meaning of "presence of a diagnosis"?
3
What is "recognized clinically"? Is there any special meaning in the word "clinically" here?
2
Does "gram negative" generally indicate highly antibiotics resistant bacteria strains?