Why is the reported number of COVID-19 deaths lower on Sundays and Mondays in the US?

I was looking at the Daily Deaths from COVID-19 from Worldometers and I noticed that the number is always lower on Sundays and Mondays. 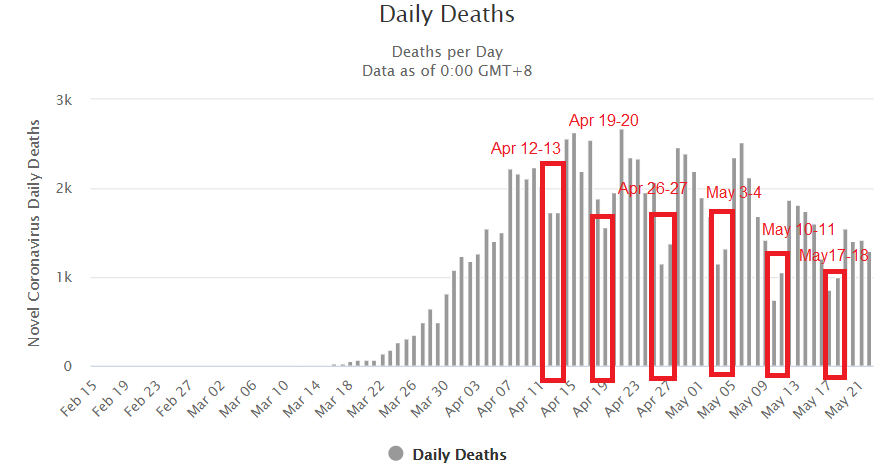 Why is that? Am I interpreting the graphs correctly?

While hospitals, clinics, long term care homes and such are of course open and working seven days a week, administrative staff typically only work 5 days a week. So someone comes to work Monday and reports 3 deaths (that may actually have occurred on Saturday or Sunday.) They may not do that first thing Monday, they may have other things going on.

Meanwhile whoever they report to has some cut off for when "things you tell me today" go into "today's number." Maybe it's noon, I have no idea, it could be 5pm, whatever. So some of the things that are reported to that person on Monday get reported to the big country-wide reporting mechanisms Tuesday.

As a result you will see two days with less deaths reported, and those two days are more likely to be Sunday and Monday than Saturday and Sunday. Sure, if the graphs were "deaths that happened on day X" and not "deaths we were told about on day X" this wouldn't happen. However in normal times, not all deaths are observed (never mind reported) on the day they happen: people who die alone at home and are discovered later, for example, or people who are suspected of having died in a house fire but it takes several days to find some remains, that sort of thing. The norm has been to count them on the day they are reported.

While people don't usually have a preference for dying on particular days determining how they died is subjected to delays. A medical examiner or other expert had to determine whether the death is from covid-19 or one of the many comorbid conditions that the person suffered from. Furthermore, there are deaths in the community that need to be examined. You can see that actual numbers change over time with hindsight, and the weekend factor introduces a delay in reporting.

One of the most pernicious ways has to do with the time it takes to tabulate deaths due to Covid-19, especially in jurisdictions where hospitals are overworked. In New York City, for example, some deaths are reported to the city’s health department within hours, but others take days — sometimes a week or more — to get tabulated. This delay means that on any given date, when officials announce the daily death toll, they do so having received only a fraction of the death reports that will eventually come in.

On the afternoon of April 1, for example, New York City officials declared that 1,374 people had died of the virus to date. But the accounts of deaths kept coming in. Two days later, the tally of people who had died on or before April 1 had climbed to more than 1,700. By April 5 it stood at 1,878. As of April 9, the official count was 2,253, a roughly 60 percent increase over the initial tally. This number will likely continue to rise, slowly, for several more days.

Not the answer you're looking for? Browse other questions tagged covid-19 coronavirus statistics death covid-19-datasets or ask your own question.

5
Is the day-of-week variance in COVID-19 case numbers a well-established phenomenon?
2
Why Covid 19 death record shows ridge and trough?
0
Why do weekly deaths in the UK dramatically decrease during the end of December / beginning of January?

2
Why does the CDC say there are an order of magnitude more COVID-19 deaths than COVID-19+Pneumonia?
1
Total number of deaths in the USA before COVID-19 and in 2020?
0
Why do weekly deaths in the UK dramatically decrease during the end of December / beginning of January?
4
What are the most common ways that COVID kills?
0
Is the number of deaths (1,913) amongst people who received a COVID-19 vaccine higher than amongst people who didn't receive a COVID-19 vaccine?
1
Why does San Marino have the most total deaths per million and a CFR of 1.8%?
1
The number of new cases of COVID
1
Is the WHO guideline on registering covid-19 deaths very expansive?