Has there been research to assess an"asymptomatic Novel corona virus 19" how long they are able to infect another person?

Has the viral load in individuals identified as carriers, without manifesting the disease itself been studied for how long they have a viral load present in their system, this is also relevant for influenza asymptomatic carriers.

I'm not aware of any study that only looked at viral loads in asymptomatic infected persons but if you look at mild to severe patients, their viral loads all tend to follow a similar pattern whereby 21 days the viral load drops below the threshold of detection. 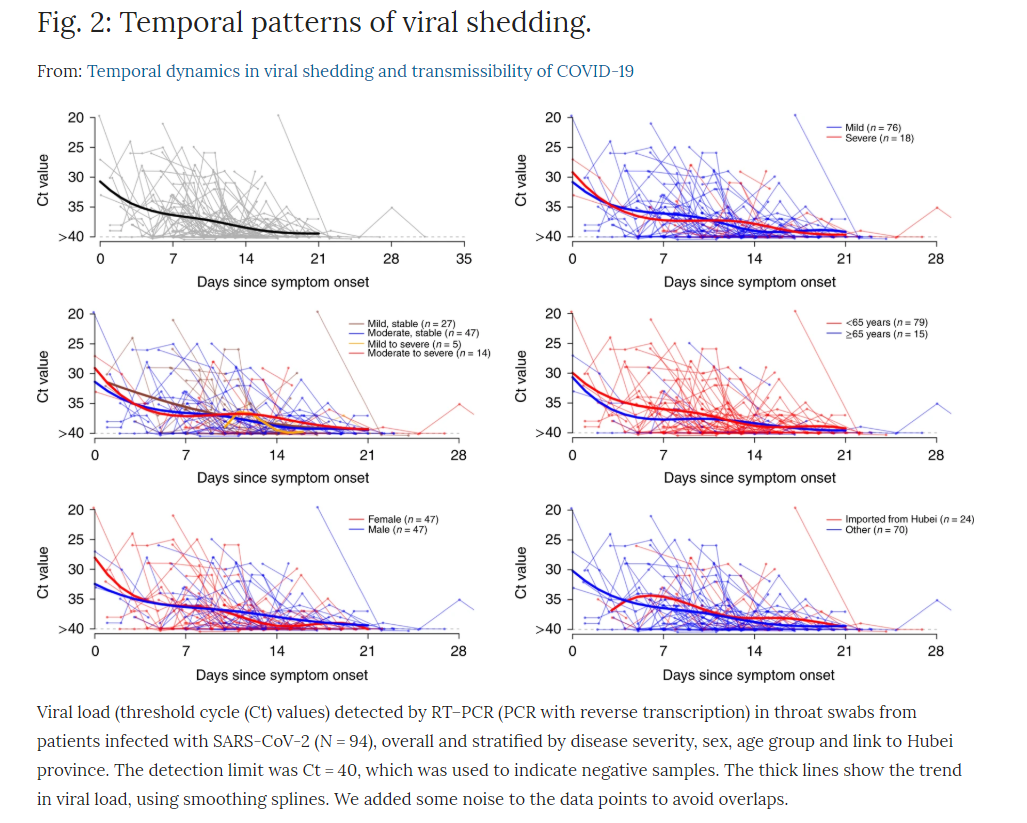 The image above goes to Ct of 40 (amplification cycles of PCR). The exact RT-PCR Ct values associated with the presence of infectious SARS-CoV-2 is unknown but viable virus has been detected at a Ct of 34. At a point beyond that one may be detecting viral fragments rather than viable virus.

However, an earlier study suggested that viral loads were proportional to disease severity

We also studied serial samples from 21 mild and ten severe cases (figure B). Mild cases were found to have an early viral clearance, with 90% of these patients repeatedly testing negative on RT-PCR by day 10 post-onset. By contrast, all severe cases still tested positive at or beyond day 10 post-onset. Overall, our data indicate that, similar to SARS in 2002–03,6 patients with severe COVID-19 tend to have a high viral load and a long virus-shedding period. This finding suggests that the viral load of SARS-CoV-2 might be a useful marker for assessing disease severity and prognosis.

So, at this time we suspect that both asymptomatic and symptomatic disease can have detectable disease out to an average of 21 days from the time they should be symptomatic. But remember also that viral loads may be higher in the 1-2 days before onset of symptoms.

Temporal dynamics in viral shedding and transmissibility of COVID-19 https://www.nature.com/articles/s41591-020-0869-5

As of May 2020, evidence suggests that coronavirus infection periods are related to viral load, viral shedding and symptoms of disease (although some asymptomatic people can still spread the infection), such as coughing, which would disperse the virus into the air.

In one case series of mild infection, 90 percent had negative viral swabs at 10 days after symptom onset; however a study of more mild-moderate infection revealed median shedding of 24 days and the longest at 42 days. However viral RNA detection does not mean that there is sufficient virus to transmit infection per se. Other case studies in Singapore have noted that viral transmission may begin 1-3 days prior to the onset of symptoms (for symptomatic infected individuals).

A more complete clinical summary, including references, is available at UpToDate, which may be freely accessible during the pandemic: https://www.uptodate.com/contents/coronavirus-disease-2019-covid-19-epidemiology-virology-clinical-features-diagnosis-and-prevention

Not the answer you're looking for? Browse other questions tagged asymptomatic or ask your own question.

1
Asymptomatic People
2
What's the margin of error for the estimate on the percentage of people infected with latent tuberculosis?