Was the Huanan wet market a super spreader event instead of ground zero for COVID-19?

There have been a number of well recognised super spreader events such as Patient 31 in South Korea where a member of the church called Shincheonji was thought to have spread the disease to 30-40 others in a church meeting.

Does the evidence now point to the virus also being spread from the Huanan market as well as a super-spreader event rather than created there amongst the bats and other animals?

Probably so because a number of the first [set of] cases identified were not related to the market. 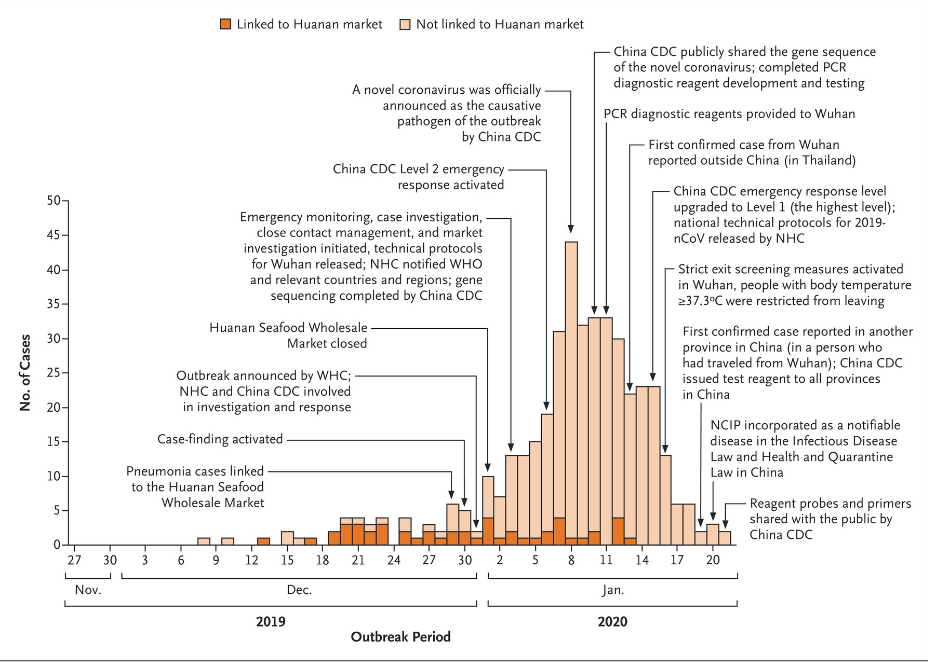 Per related question here, the early Chinese PCR tests for this new virus seem quite insensitive (unless there was some deliberate coverup of the true results), so that they could not find anyone asymptomatic who was a virus carrier in early January. Thus the actual transmission chains in those early days are probably going to remain mysterious to a good extent, unless antibodies can help retrospectively answer it now, which seems doubtful with all the other infection sources in Wuhan that those people may have been exposed to in the meantime.

And some comments on that:

“If we look at the first 42 cases published in academic journals, around ten have no history of going there [to the market]. This is a very important hint that the market may not be the origin of this infection,” [Chen Chien-jen] said.

“When we try to trace back to the [index] case it is very difficult. If the case had a mild disease you can never find it.”

And what we seem to know from Italy in term of super-spreaders:

Patient One—for privacy reasons, we know just his first name, Mattia—spent weeks on a ventilator before he could breathe on his own again, and was released from the hospital only on March 22. In Italy, Mattia is most often portrayed as a success story, a story of resilience, in a country where more than 21,000 people have died from the coronavirus and some good news is needed. “Mattia teaches us that you can also recover from serious illness,” Raffaele Bruno, the head of infectious diseases at the San Matteo Hospital in Pavia, where Mattia was treated, told me.

But his story is also in some ways unsettling. While Mattia was still in the hospital, his father died of COVID-19, and his wife, nearly eight months pregnant, tested positive as well, though she eventually recovered. Mattia turned out to be a “super-spreader” who infected scores of others, including people in his amateur soccer league, and at the hospital where he was diagnosed. His is a cautionary tale of asymptomatic contagion and the unpreparedness of hospitals. In an audio message after his release, Mattia urged his fellow Italians to stay inside, and said he was lucky to have been treated in the early days of the outbreak, before Lombardy started running low on ventilators. (Officials believe Italy’s Patient Zero, the first person to have brought COVID-19 to the country, is likely a German who traveled to northern Italy around January 25.)

More news in the same vein (the Guardian, March 17):

The first case of someone suffering from Covid-19 can be traced back to 17 November, according to media reports on unpublished Chinese government data.

The report, in the South China Morning Post, said Chinese authorities had identified at least 266 people who contracted the virus last year and who came under medical surveillance, and the earliest case was 17 November – weeks before authorities announced the emergence of the new virus.

The Chinese government was widely criticised over attempts to cover up the outbreak in the early weeks, including crackdowns on doctors who tried to warn colleagues about a new Sars-like virus which was emerging in the city of Wuhan in Hubei province.

The data obtained by the Post, which the Guardian has not been able to verify, said a 55-year-old from Hubei province could have been the first person to contract Covid-19. For about one month after that date there were one to five new cases reported each day, the report said, and by 20 December there were 60 confirmed cases.

Official statements by the Chinese government to the World Health Organisation reported that the first confirmed case had been diagnosed on 8 December. Doctors who tried to raise the alarm with colleagues about a new disease in late December were reprimanded. Authorities did not publicly concede there was human-to-human transmission until 21 January.

Jonathan Mayer, professor emeritus at the University of Washington’s department of epidemiology, said it was “entirely conceivable” there were cases as early as mid-November.

“I have no way of knowing which of these possibilities in fact happened,” Mayer told the Guardian.

“We know that there are reports of early suppression of reports of cases, and the ‘whistleblowers’ dealt with rather severely. But in fairness, the signs and symptoms of Covid-19 are non-specific and even now, without confirmatory testing, it is easy to mistake this for another disease.”

Mayer said it was highly improbable that patient zero would ever be identified.

And no, genetic analyses are unlikely to provide a deep clue into this (market issue). What the PNAS paper mentioned in the other other answer actually says (without ever discussing the market) is:

A complex founder scenario is one possibility, and a different explanation worth considering is that the ancestral Wuhan B-type virus is immunologically or environmentally adapted to a large section of the East Asian population, and may need to mutate to overcome resistance outside East Asia.

The authors of this paper appear have made somewhat stronger statements to the press, e.g. to Newsweek:

He said it is possible the outbreak did not originate in Wuhan, as until January 17, almost all the isolates were type B. In Guangdong, a province about 500 miles from Wuhan, seven of the 11 isolates were type A. "These case numbers are small because few genomes are available for the early stage of the outbreak, before the Chinese New Year travel pre-January 25 would have started mixing patterns up geographically," Forster said.

In the actual PNAS paper, even though it's been submitted through the more controversial Contributed-track (the peer-review system of which was quite derided about a decade ago, although not so much recently), the authors don't actually make these stronger claims about the putative Guangdong origin of the outbreak. But they do state that some cases abroad, e.g. in Canada, Japan or the US came from Guangdong.

Newsweek also paraphrased them as saying

Based on the data Forster and his colleagues have collected, the coronavirus outbreak appears to have started between September 13 and December 7.

Again, this putative, inferred September timeline is not found in the actual PNAS paper. (I haven't checked their supplementary materials though.) So yeah, this may be a good example of how to make claims to the press that you couldn't even get past the PNAS Contributed-track peer review... which then get reported as having been peer-reviewed (the Daily Mail said that when paraphrasing these claims.)

Phylogenetic network analysis of human genomes have been used to reconstruct historic population movements of humans. Such a study has also been completed of 160 of the SARS-CoV-2 genomes published to ascertain pathways of infection across the world. The data was taken from the GISAID database (https://www.gisaid.org/).

Type A is the ancestral type most closely related to the putative ancestral coronavirus isolate BatCoVRaTG13 found in Yunnan which is on the other side of China adjacent to Myanmar, and Vietnam. There are two major branches named B and C based on the striking numbers of individuals infected.

Type B is the main type found in East Asia including Wuhan, and type C in Europeans. Other papers refer to these genotypes as I (A), Ia (B), and II (C). There were 4 cases in Guangdong on the other side of China nearer Yunnan who had the ancestral type A.

The fact that the majority of patients in Wuhan were infected with genotype B suggests that the disease did not develop there and was brought in from elsewhere, mutated possibly to B in Wuhan thereby becoming more lethal and infectious. The Huanan Seafood Market was likely a super-spreader event since it was linked to 50% of the first 41 known cases though not all of the pandemic. The first patient was identified in Wuhan on November 17 but based on further analyses the first infection could have occurred much earlier.

Since the study reported in PNAS was carried out, the research team has extended its analysis to 1,001 viral genomes. While the latest work has yet to be peer-reviewed, Forster says the results suggest that the first infection and spread among humans of COVID-19 occurred between mid-September and early December. The phylogenetic network methods used by researchers—allowing the visualization of hundreds of evolutionary trees simultaneously in one simple graph—were pioneered in the late 1970s, and further developed during the 1990s. The techniques came to the attention of archaeologist Colin Renfrew, a co-author of the PNAS study, in 1998. Renfrew went on to establish one of the world’s first archaeogenetics research groups, at the University of Cambridge.

Interestingly, if one were to speculate on the origin of the virus, then

On 24 October 2019, Liu and his colleagues from the Guangdong Wildlife Rescue Center of China [1] first detected the existence of a SARS-CoV-like CoV from lung samples of two dead Malayan pangolins with a frothy liquid in their lungs and pulmonary fibrosis, and this fact was discovered close to when the COVID-19 outbreak occurred. Using their published results, we showed that all virus contigs assembled from two lung samples (lung07 and lung08) exhibited low identities, ranging from 80.24% to 88.93%, with known SARSr-CoVs. Hence, we conjectured that the dead Malayan pangolins may carry a new CoV closely related to SARS-CoV-2.

Not the answer you're looking for? Browse other questions tagged covid-19 disease-transmission or ask your own question.

6
Why were so many Covid-19 negative tests among close contacts of the early Chinese cases?

0
Did SARS-CoV-2 spread into Japan, USA, Taiwan, and other countries from single super spreaders?
0
Possibility of using the virus instead of the spike protein for covid-19 immunisation using MNA delivery
1
What is the distance the COVID-19 virus can travel in the air out of doors and remain infectious for someone breathing the same air?
1
Is the efficacy of N95 respirators or surgical masks reduced when wet (COVID-19)?
2
Are there known outdoor super spreader events for COVID-19? Are there *any* known outdoor infections at all?