How does amiloride increase calcium reabsorption in the kidneys?

Amiloride is a potassium-sparing diuretic that acts on the distal convoluted tubule and collecting ducts to inhibit ENaC channels. I found studies that show that this drug increases calcium reabsorption dependent on luminal pH, but what is the mechanism behind this effect?

Regarding calcium transport in the kidney:

In contrast with the proximal tubule and the thick ascending limb of the loop of Henle, the distal tubule reabsorbs calcium exclusively via the transcellular route. 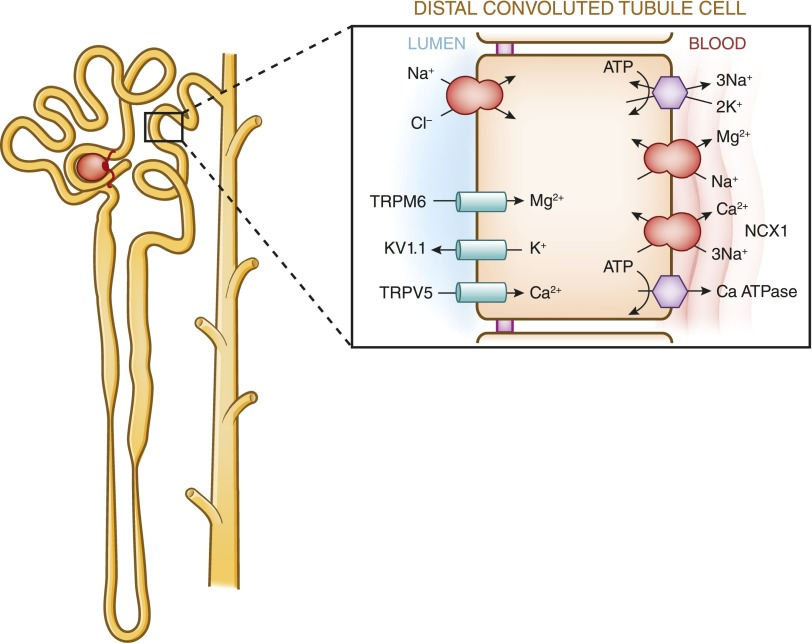 Also, calcium availability in blood (and hence for filtration in the kidney) is dependent on pH - higher pH will increase binding of calcium to albumine (this is happens e. g. in plasmapheresis when EDTA is added to your blood to prevent coagulation outside of your body); see also: https://www.kidney-international.org/article/S0085-2538(15)57007-5/pdf

In the distal convoluted tubule (DCT) and connecting tubule (CNT), acidosis effects the expression of TRPV5, but also the luminal H+ concentration has direct effects on TRPV5 activity (H+ inhibits).

Consequently, bicarbonaturia, by increasing luminal pH increases TRPV5 activity. There is debate as to whether there is significant calcium reabsorption from the collecting duct. However, α intercalated cells in this segment, when unable to secrete protons such as with dRTA, will fail to acidify the urine altering the solubility of calcium salts. In the proximal tubule, a high pH inhibits citrate reabsorption (as observed in pRTA).

Patients with dRTA have long been appreciated to also have a disorder of sodium wasting.73 The molecular details of how the vacuolar H+-ATPase in the collecting duct contributes to sodium reabsorption were recently described. In combination with pendrin and Slc4A8, the H+-ATPase mediates thiazide-sensitive sodium reabsorption through the β-intercalated cell under situations of volume depletion.72,88,89 Mutations in either disease causing subunits would therefore prevent transcellular sodium reabsorption via this mechanism. Consequently, patients with mutations in the H+-ATPase would be prone to volume contraction and, as has been suggested for mutations in NCC, have increased proximal tubular sodium and consequently calcium reabsorption. Thus, if volume contracted, these patients would further attenuate hypercalciuria induced by metabolic acidosis. However, it should also be noted that volume contraction could exacerbate nephrocalcinosis and nephrolithiasis by decreasing urinary flow resulting in increased urine supersaturation of calcium, phosphate, or oxalate.

Not the answer you're looking for? Browse other questions tagged side-effects renal diuretics mechanism-of-action or ask your own question.

12
Dietary Factors for Calcium Oxalate Kidney Stones
2
Body's response to rapid ingestion of water?
7
How does anxiety and stress affect the bowels?
1
Natural treatment of chronic prostatitis - Does herbal medicines have side affects?‏
5
Demodex control with antibiotics: why and how?
6
Where does Ibuprofen inhibit COX-1, and what is its MoA?
6
How does the "leucovorin rescue" work exactly? Why doesn't it make cancerous tumours grow?