How quickly do viruses multiply within mammal cells? [closed]

Once a virus infects a mammal, how quickly do viral particles multiply within their bodies? In other words, what is the expected doubling time of viral particles once a mammal is infected?

If this question is too broad, consider the influenza virus within the human body or a well studied virus within a lab animal.

Short answer: it depends on the virus!

For example, during the early stages of an acute HIV-infection in humans the virus will double every 0.65 days for a median of 14 days until it reaches a peak viral load. After this peak, the viral load will decrease at a half-life of 1.2 days until a steady-state is reached (Ribeiro et al., 2010)

As the saying goes "it depends", but actually on quite a few factors: the virus strain, the host, and specific cells of the host, and the time frame considered e.g.:

Influenza viruses exhibit large, strain-dependent differences in pathogenicity in mammalian hosts. Although the characteristics of severe disease, including uncontrolled viral replication, infection of the lower airway, and highly inflammatory cytokine responses have been extensively documented, the specific virulence mechanisms that distinguish highly pathogenic strains remain elusive. In this study, we focused on the early events in influenza infection, measuring the growth rate of three strains of varying pathogenicity in the mouse airway epithelium and simultaneously examining the global host transcriptional response over the first 24 hours. Although all strains replicated equally rapidly over the first viral life-cycle, their growth rates in both lung and tracheal tissue strongly diverged at later times, resulting in nearly 10-fold differences in viral load by 24 hours following infection. We identified separate networks of genes in both the lung and tracheal tissues whose rapid up-regulation at early time points by specific strains correlated with a reduced viral replication rate of those strains.

So your question is not terribly easy to answer by a simple figure without establishing a time frame, cells of interest etc. But if you somehow care about that initial rate of replication, before any differences are observed across influenza strains...

Remarkably, all three strains showed profiles of essentially identical, aggressive replication in the respiratory tract over the first 12 hours with the levels of viral M gene increasing by >1000x (Figure 3 A and C). At 16 hours, however, the replication rates started to diverge with the low pathogenicity X31 lagging behind that of the high pathogenicity PR8 and VN strains. Over the next 32 hours, the quantity of X31 in the lung remained essentially constant while that of PR8 and VN continued to increase, reaching levels approximately 5x higher by 48 hours (Figure 3 C). In the trachea, as in the lung, all three strains replicated equally rapidly over the first 8 hours, with the M gene levels increasing approximately 100x (Figure 3B). From 8 hours onward however, the levels of VN remained constant while PR8 and X31 continued to grow rapidly with M gene levels increasing by more than 20x over the next 12 hours (Figure 3D). Importantly, the viral load measurements in the lungs and tracheas were performed in the same individuals, demonstrating the large, tissue-specific differences in replication rates between these three strains. 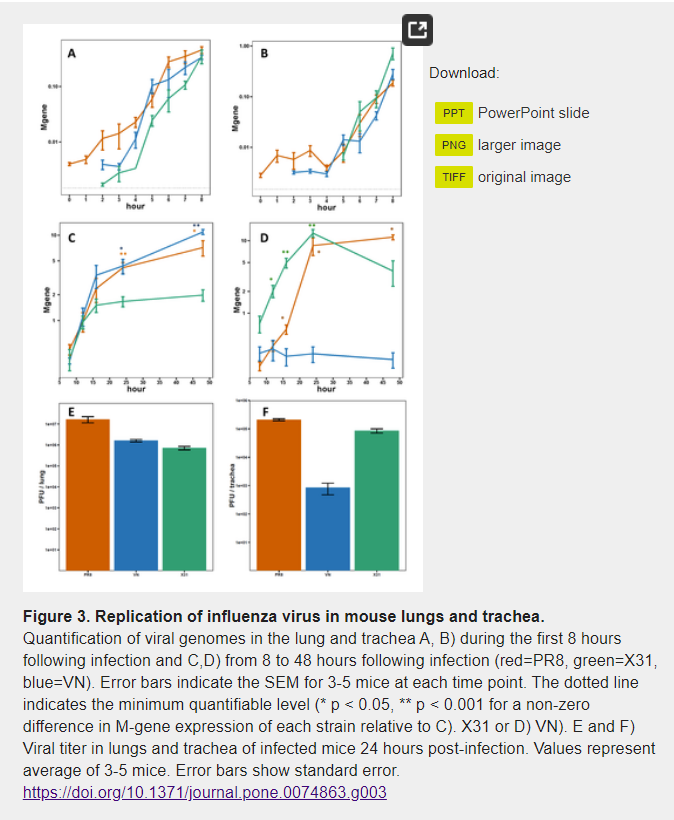 So, more that 1000-fold replication within the first 12 hours for influenza in mice lungs (the most suitable cells), but only about 100-fold in the less suitable trachea cells (where replication differences between strains are also observed somewhat earlier, after 8 hours).

Virus quantification was done by qPCR in this study.

Not the answer you're looking for? Browse other questions tagged virus or ask your own question.

1
Are virus strains different viruses?
6
Does bleach have to be diluted to be more effective to kill virus?
21
What is the main way COVID-19 spreads?
2
How relevant is TMPRSS2 for the entry of common-cold coronaviruses?
6
How long does it take for the COVID-19 antibody to disappear?
1
Are many viruses actually good for us?... maybe even essential to our survival?
10
Can someone have an allergic reaction to a virus?
6
What determines whether an influenza virus causes the flu or a cold?