Does the anti-parasitic Ivermectin work in actual human studies versus the Petri dish in vitro studies, when treating coronavirus COVID-19 infection? And if so, is it safe in humans?

An in vitro study was done.

Yes. Prevents it too. 100% in some studies, but not others, but then, the vaccines aren't proven stop it 100%, and ivermectin's safety profile is far superior.

What's established/true has changed a lot since this question was asked and initially answered.

Does CHEST only publish results of INvalid clinical evidence? No. It's v. reputable. Yes, this retrospective study shows it works, and likely works much better than the other treatments already in use.

Chest Article : Use of Ivermectin Is Associated With Lower Mortality in Hospitalized Patients With Coronavirus Disease 2019 (Title, Link)

And in addition to reliable clinical evidence (which Cochrane says evidence shows is as reliable as RCT evidence) there are a great many preprint results from RCT and published results from RCT. Rather than put up a static, soon to be wrong summary, I point to this:

The FLCCC's comprehensive review of the emerging evidence for Ivermectin use in our I-MASK+ protocol (PDF, continuously updated) (It recently had 87 citations and resolves to this URL but that has changed or is sure to change.)

Also, it is more than an incredibly popular preprint that has surely saved tens of thousands of lives; it has now passed peer review for publication in Frontiers in Pharmacology. doi: 10.3389/fphar.2021.643369.

They put it thus in their review:

To our knowledge, the current review is the earliest to compile sufficient clinical data to demonstrate a strong signal of therapeutic efficacy based on numerous clinical trials in multiple disease phases, however it is limited by the fact that only a minority of studies have been published in peer-reviewed publications, with the majority of results compiled from manuscripts uploaded to medicine pre-print servers or from registered trials that have posted preliminary results on clinicaltrials.gov.

] But "minority" != 0. Overall, the results are largely highly significant. Results from 16 clinical trials and 3 large case series are reviewed.

Two manuscripts reviewing the scientific rationale and evolving published clinical evidence base in support of the MATH+ protocol passed peer review and have been accepted for publication in major medical journals at two different time points in the pandemic (2, 3).

e-bmc.co.uk : This organization has published a meta-analysis to the rigorous standards of the WHO by these extremely experienced and prolific Cochrane authors.

Ivermectin has helped Billions of patients, is helping Millions fight the pandemic.

People have already received far over three billion < sic > doses, and the record of significant adverse reports indicates is about as safe as medicine gets.

There are now several literature reviews and meta-analyses by several groups of doctors including the from FLCCC - who are some of the most experienced in emergency medicine. These are confirmed by their clinical experience as well as large population studies and medical groups in several countries on the latest research.

Yup. The 100% figure comes from Carvallo. It reports:

The overall infection rate in health care workers recruited for this study was 20% with 237 testing positive for CoViD 19 during the 3 month study recruitment. Of those infected, all patients were from the comparator group of using PPE alone. This represented an overall infection rate of 58.2% ( 237 of 407) in the PPE group. No patients of the 788 treated with [IVERMECTIN] tested positive for CoViD 19 during the study.

There are two recent WHO-originated and funded endorsements of ivermectin. First, on the WHO website, ivermectin is recommended for treatment of Covid-19 patients when they are being treated with immunosuppressants.

Secondly the WHO funded an evaluation of the evidence to date and Dr Hill, the expert consultant the WHO relies on for such evaluations of evidence to be used as the basis for official WHO recommendations has spoken very encouragingly regarding the evidence from randomized controlled trials demonstrating the utility of Ivermectin in treating Covid-19 that his work so far has uncovered:

-- (The ~Sphere data-derived paper is obviously garbage and merits scant not attention outside the tabloids.) 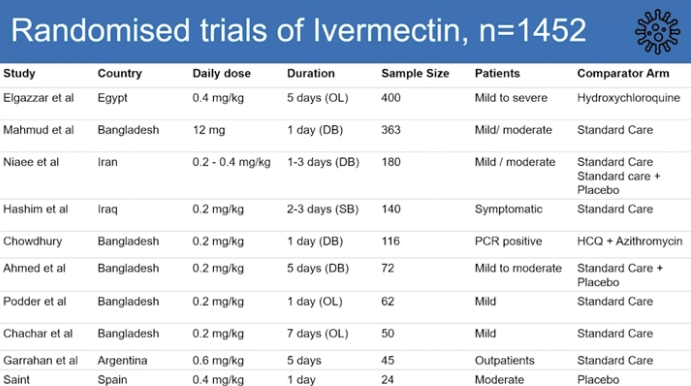 There is a paper which suggest that ivermectin is unlikely to be an effective antiviral vs. SARS-CoV-2 at recommended dosing.

Please find this preprint or this paper.

This paper has the following description.

Recently, an article by Caly et al. reported that ivermectin inhibited severe acute respiratory syndrome‐coronavirus (SARS‐CoV‐2) in vitro causing an ~ 5,000‐fold reduction in viral RNA at 48 hours with ivermectin at 5 μM. The concentration resulting in 50% inhibition (IC50) of 2 μM (1,750 ng/mL) is > 35× higher than the maximum plasma concentration (Cmax) of 0.05 µM (46.6 ng/mL)2 after oral administration of the approved dose (~ 200 μg/kg) and ivermectin showed little to no activity 1 μM in vitro. Because ivermectin is highly bound to serum albumin (93%), the IC50 is orders of magnitude higher than the unbound plasma Cmax after approved doses of ivermectin (0.0035 µM; 3.26 ng/mL).

Therefore, a large estimate is that the plasma concentration is 2 μM /0.0035 µM =571 times insufficient.

I think the key points of above paper are as follows;

However, as described in the @Matthew Elvey 's answer, as of December 5, 2020, there are many clinical results which suggest that we can get enough efficiency with far less dosage than would be assumed from pharmacokinetic considerations; formulas that combine several things such as zinc and vitamins seem to be more desirable.(Added on December 5, 2020)

The gap between inadequate blood levels and a strong clinical effect is one puzzle. It is an exciting scientific topic. This gap will be bridged as the mechanism of action of ivermectin is elucidated.

So far, various mechanisms have been proposed, but it has not been decided which one is the mainstay. That's what Satoshi Omura said in his open youtube lecture (In Japanese, the relevant part has been headed out.) at Showa Pharmaceutical University at the end of October, 2020.

The following is a summary of the youtube lecture by Satoshi Omura.

Fig.1 Examples of proposed mechanisms of action. Adapted from a lecture given by Satoshi Omura at the end of October 2020, partially written in Japanese.

They will administer the Ivermectin Tablets, sold under the brand name STROMECTOL, orally. According to a Japanese newspaper article (written in Japanese), the trial is expected to be completed in March 2021. (Completion = LPI?)

On the other hand, scandalous clinical data also exists. It seems that one data analysis company, Surgisphere published a preprint saying that ivermectin was beneficial based on analysis of real world data, but it was later retracted. According to this article, it seems to have pointed out many unnatural aspects of the data.

By the way, Ivermectin's 'birthplace' features hot news about Ivermectin. Note that a bit slow in terms of information; as of 5 December 2020, the introduction of the paper published on 10 November is the most recent. Even more unfortunate is that the information is in Japanese. However, it will be helpful to see the trends. For many people, though, they may need the help of machine translation.
https://kitasato-infection-control.info/ (Written in Japanese)

We do not know. Until there is a phase 3 clinical trial and ivermectin gets FDA approval, it is too early to draw definite conclusions.

[The NIH has selected some of the studies performed and combined them into a table][1]. At the time, all of them had one or more methodical disadvantage or limitation such as no peer review, no randomisation or a small sample size (20 patients in each arm) and were deemed insufficient to draw a conclusion.

The most recent study published in The Lancet (one of the most prestigious scientific journals) found no statistically significant difference in clinical endpoints for the usage of ivermectin, and maybe smaller viral loads but no difference in vital signs etc. This study also had a very small sample size (12 patients in each arm, all at low risk).

This in-vitro study reveals exciting data regarding Ivermectin, which is typically used for treatment of scabies.

I was unable to find any clinical data to support use of Ivermectin for COVID-19. But this study definitely supports starting a clinical trial given the widespread availability of Ivermectin. Overall ivermectin is well-tolerated in both children and adults, with rash being one of the most common side effects. It may have fewer severe adverse effects than hydroxychloroquine, which can cause fatal arrhythmias like Torsades de Pointes(though this is more with chronic use; https://www.ncbi.nlm.nih.gov/pubmed/16615675). This supports ivermectin as a good candidate drug to study.

It is important to note, however, that many drugs that have shown to be effective in-vitro will fail to produce any clinical benefit when given to animals or humans. For instance, for ebola virus, chloroquine was effective in-vitro but not in guinea pigs (https://www.ncbi.nlm.nih.gov/pubmed/26459826). There are many factors that could contribute to these discrepancies, including issues with bioavailability, distribution to the appropriate tissues, entrance into cells, and breakdown of the drug by cellular or viral mechanisms.

(What's true has changed even further!! A lot changed AGAIN - since this question was asked and initially answered, AND THEN since it was (last month) initially answered by me! So time for another new answer!)

YES! In addition to several literature reviews by several groups of doctors including some of the most experienced in emergency medicine, and confirmed by their clinical experience as well as large population studies and medical groups in several countries on the latest research, there are two recent WHO-originated and funded endorsements of ivermectin. First, on the WHO website, ivermectin is recommended for treatment of Covid-19 patients when they are being treated with immunosuppressants. Secondly The WHO funded an evaluation of the evidence to date and the expert consultant the WHO relies on for such evaluations of evidence to be used as the basis for official WHO recommendations has spoken very encouragingly regarding the evidence from randomized controlled trials demonstrating the utility of Ivermectin in treating Covid-19 that his work so far has uncovered.

Not the answer you're looking for? Browse other questions tagged medications covid-19 coronavirus or ask your own question.

2
Coronavirus active in freezer for years
2
How quickly would boiling water kill coronavirus?
2
Why are dermatologists working on coronavirus cases?
2
How is COVID-19 transmission tracked with any accuracy?
2
Could suppressing your cough help fight a viral infection like COVID-19?
8
Are there diseases for which infection does not grant lasting immunity but a vaccine does?
2
How would we run experiments to determine the prevalence of aerosol COVID19 spread (long time and long distance) versus droplets?
6
How long does it take for the COVID-19 antibody to disappear?