Why is CFR calculated this way it is? [duplicate]

Good afternoon everyone! I am only 17 years old, and this may sound like a stupid question...

Anyway, we currently calculate the "case fatality rate" by dividing the number of patients who have died from a specific disease by the total number of those who got infected.

I understand that maybe the data we have isn't enough nor accurate to use that reason once a country could have only 100 cases, which out of them, 70 died, and only 30 recovered - giving a false CFR having in count time.

Besides that, I also have read this article: Does COVID-19 have a mortality rate of 41%?, in which they explained why the second way of calculating CFR approaches the first one.

But that isn't necessarily true. Let's take, for example, the case of COVID-19 in Italy. Because of the older population, the mortality rate is expected to be a lot higher in Italy than in China (about 7.2% compared to 2.1%). Nevertheless, the statistics have been constant for a long time, remaining at almost 45% of death ratio (if calculated using the second way). This doesn't make any sense, but it also looks more accurate than 7.2%. If we take on mind that only 10,950 people recovered from the 20,084 closed cases, the numbers seem right.

I also have in mind that the second way of calculating the CFR doesn't apply to all ages and genders once a 40% mortality rate can't be applied to people <20 years the same way it is to people >60 years. The second way doesn't assume all of the population from a specific country. Although, neither does the first one. If we have to count the real consequences in a general way, isn't this the most appropriate way of calculating it? 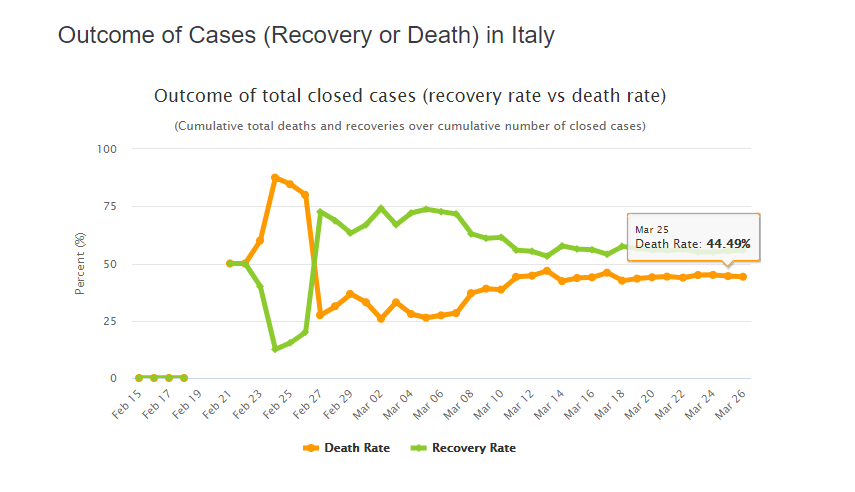 Why should we use the total number of cases (active cases + deaths + recoveries) to calculate CFR if the active cases didn't have an outcome yet?

Your proposed method assumes that the "no outcome yet" group is going to have the same ratio of outcomes as the "died" and "recovered" groups. This is true only if either the number of infections is not changing and has been constant for longer than the case-resolution time, or if "time to recovery" and "time to death" are equal.

33
Does COVID-19 have a case fatality rate of 41%? Is this formula correct?
4
Are countries with lower life expectancy expected to have lower death rates due to Coronavirus?
6
Why were so many Covid-19 negative tests among close contacts of the early Chinese cases?
1
Do vaccinated people not have zero risk of mortality by Covid 19?