Why doesn't WHO think wearing mask is protection measure for COVID-19? [duplicate]

Ask Question
Asked 1 year, 3 months ago
Active 4 months ago
Viewed 722 times
3
This question already has an answer here:
Why is a (simple) mask not recommended for asymptomatic COVID-19 patients? (1 answer)
Closed last year.

In WHO official website "What can I do to protect myself and prevent the spread of disease?", it doesn't mention that wearing mask an effective measure to protect people.

I don't understand why wearing mask is not good way to prevent infection of COVID-19. Is it just because masks are out of stock?

PPE is the least effective control because it involves a high level of worker involvement and is highly dependent on proper fit and correct, consistent use.

e.g. The likelihood for untrained personalto properly use PPE is not realistic, so it would be negligent of the WHOto suggest this to the public for this use.?

This does not address reducing transmission. Though, masks, used by those untrained, are not realistic in halting the spread. One method that has proven to halt the spread is self-quarantine (both healthy and non-healthy) and social distancing and the other recommendations listed in the link provided.

Update: April 2 news is that the WHO has now commissioned a panel to study the problem further:

Should more of us wear face masks to help slow the spread of coronavirus?

This question is to be assessed by a panel of advisers to the World Health Organization (WHO).

The group will weigh up research on whether the virus can be projected further than previously thought; a study in the US suggests coughs can reach 6m and sneezes up to 8m.

The panel's chair, Prof David Heymann, told BBC News that the new research may lead to a shift in advice about masks.

The former director at the WHO explained: "The WHO is opening up its discussion again looking at the new evidence to see whether or not there should be a change in the way it's recommending masks should be used."

The effectiveness of masks in the general population, as opposed to use by HCW (health-case workers) has not been studied a lot. Some such studies involved "home use" which may or may not be equivalent to "going shopping" use, so we don't have a lot of clear data on how people might be using masks in the present pandemic.

But some facts that were reported...

In the 1919 influenza pandemic, masks were available and were dispensed to populations, but they had no impact on the epidemic curve.

There was no clear idea how to design masks at that point, a "germ-proof" surgical mask was only available from the 1930s onward.

We conducted a prospective cluster-randomized trial comparing surgical masks, non–fit-tested P2 masks, and no masks in prevention of influenza-like illness (ILI) in households. [...] Adherence to mask use was associated with a significantly reduced risk of ILI-associated infection. We concluded that household use of masks is associated with low adherence and is ineffective in controlling seasonal ILI. If adherence were greater, mask use might reduce transmission during a severe influenza pandemic.

RESULTS: Sixty (8%) contacts in the 259 households had RT-PCR-confirmed influenza virus infection in the 7 days after intervention. Hand hygiene with or without facemasks seemed to reduce influenza transmission, but the differences compared with the control group were not significant. In 154 households in which interventions were implemented within 36 hours of symptom onset in the index patient, transmission of RT-PCR-confirmed infection seemed reduced, an effect attributable to fewer infections among participants using facemasks plus hand hygiene [...]. Adherence to interventions varied.

Basically, masks can work for the "average Joe" but note that some effect of hand hygiene was observed even without masks, but not vice-versa.

Here's the full summary table from the review of MacIntyre and Chughtai (2015) on household/community settings studies. (Paper found by Vladimir F.) 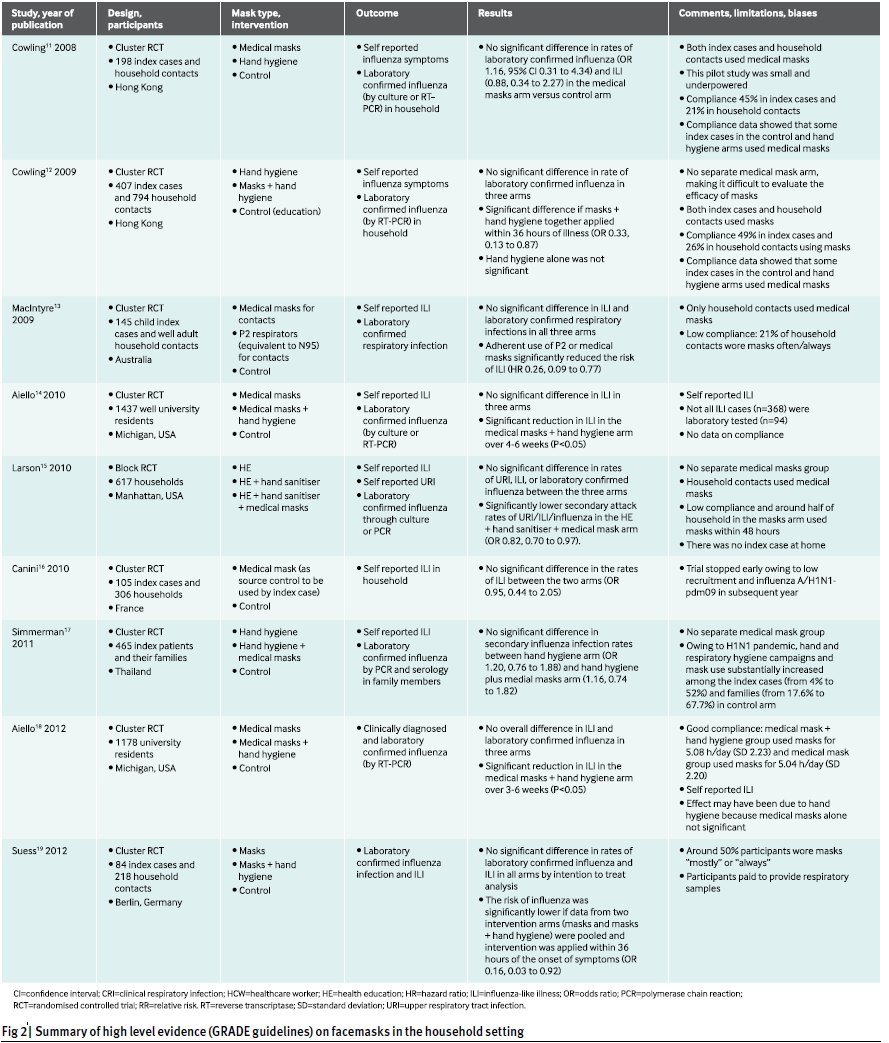 As you can see, most report no significant differences for masks alone. The review says that a meta-analysis is not possible due to varying study design(s). It also says the studies may have been underpowered. They discuss the studies in a bit more detail (including the two I've already mentioned above). Since the ones inside a household are pretty similar to each other, let me quote just what they say on two studies on a slightly different setting:

Two RCTs in university residence halls in the United States over two influenza seasons randomised well students into medical masks plus hand hygiene, medical masks alone, or control. Influenza-like illness and laboratory confirmed influenza were not significantly reduced after either intervention, although during the first four to six weeks, influenza-like illness was significantly lower in the medical masks plus hand hygiene arm in both trials (P<0.05). This suggests that hand hygiene might have been the major contributor to protection.

The routine use of facemasks is not recommended by WHO, the CDC, or the ECDC in the community setting. However, [citing the same guidelines] the use of facemasks is recommended in crowded settings (such as public transport) and for those at high risk (older people, pregnant women, and those with a medical condition) during an outbreak or pandemic.

However... looking at the actual sources cited 2009 CDC page and 2006 WHO paper... what they actually say (the CDC in particular) is that both criteria (crowded setting and vulnerable person) have to be met simultaneously for the mask to be recommended. 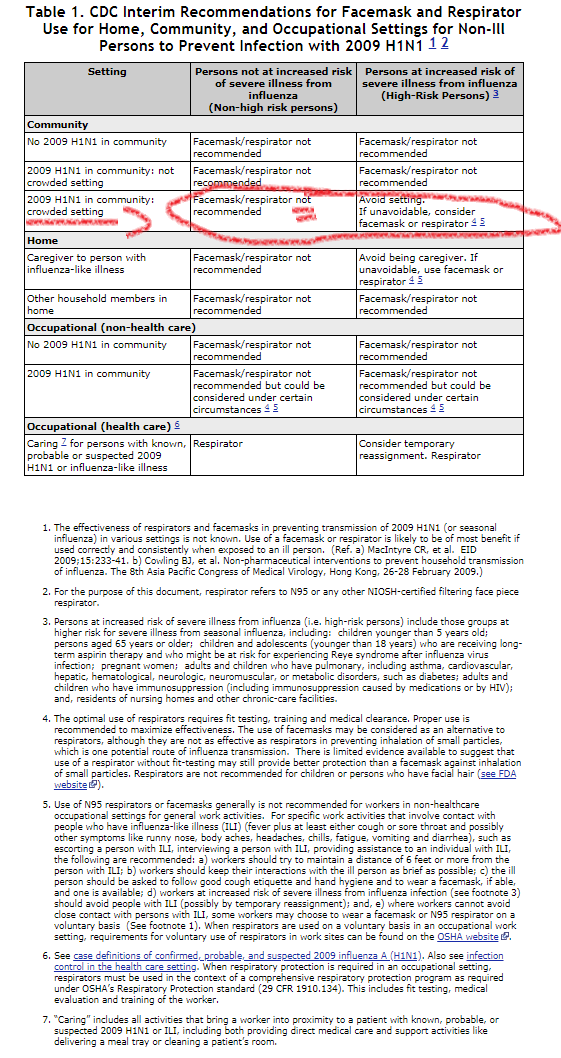 The prevalent claim is that these masks do not really protect (as opposed to a respirator) the individual wearing it and should be only be worn by sick people and by medical personel. The wearer must be trained and there is a shortage of proffesional made masks and community usage might increase the shortage.

However, there are also studies that offer a view differing from those referenced by @Fizz. For example:

Improvised masks or reuse of disposable masks when in contact with other people might well be sufficient to quench a flu pandemic, when combined with hand sanitation.

This study was based on modelling:

We conclude that population-wide use of face masks could make animportant contribution in delaying an influenza pandemic. Mask use also reduces the repro-duction number, possibly even to levels sufficient for containing an influenza outbreak.

Several countries, such as the Czech Republic and Slovakia are now using face masks for general public in an effort to lower the reproduction number and thus slow the epidemics. One peculiar aspect of COVID-19 is spreading by people who do not know they are sick so the suggestion for the masks to be worn only by sick people is problematic even if we assume zero protection for the wearer. Certain training in proper usage of these masks can and is being done by media and in social media.

Not the answer you're looking for? Browse other questions tagged covid-19 who-world-health-org or ask your own question.

8
Why is a (simple) mask not recommended for asymptomatic COVID-19 patients?
5
Would facemasks reduce virus transmisions in vulnerable populations?

5
Would facemasks reduce virus transmisions in vulnerable populations?
2
Safely helping the elderly with food deliveries during COVID-19
1
Is there any upside of using N95 masks instead of N99 or N100 to protect against COVID-19?