Can the capacity for COVID-19 tests be amplified by testing multiple samples mixed together and testing each only if positive?

If I understand it right, the following steps are to be taken into account:

Hence, it seems that 4 sub-questions can to be considered to help one answer:

So far I have read a rather general account on how the tests are conducted and I think I have a somewhat crude understanding of how NAAT works.

Update Apr 2: Pooled tests are under development now (newspaper in German), the plan is to pool 5 samples and to use the usual amount of each sample (and presumably dilute less) so that sensitivity is not an issue.

In general, pooled tests help in screening situations, that is, when very few samples are positive, so that 10+ samples can be pooled and still only a small fraction of pooled samples is positive. They require good sensitivity.

We're not in a screening situation with the current SARS-CoV-2 testing, and pooling wouldn't help much right now - it would probably not be worth while the effort to develop and implment pooled tests.

(update: deleted newspaper hints that logistics may be the bottleneck:)

What is the bottle neck in the testign process?

According to Kekulé (10 min or so into the interview) the "lab machinery" in Germany has a capacity of several 100k tests per day, but right now there are shortages in reagents but also e.g. in the swabs for taking samples (so, comparably low tech parts of the test). Pooled tests of course need just as many swabs (if not more: false negatives due to the sampling not picking up virus material is a concern, and the usual remedy is to take more swabs.)

Anything that comes now are my guesses as a professional from a neighbouring field: analytical chemistry). I don't have any first hand experience with PCR.

I expect the reagent needs to scale (mostly) with the number of performed tests. I also expect the amount of tested material to be the same (prescribed by the method/protocol) for each run. That is, when you pool n samples, you'd take only 1/n of material from each (In practice it may be better to pool and then take out 1/n of the pooled sample). Update: The test described in the newspaper goes the opposite direction: they take n times the sample material in order to avoid trouble with low sensitivity. In consequence, this cannot be considered a "derived" "variety" of the 1-sample tests, it must be newly developed almost from scratch.

Again: the tests, mor precisely the number of batches of tests since multiple tests can be processed in parallel.

Is the the nucleic acid amplification test still reliable enough, if the Virus RNA to be detected is dilluded among multiple samples?

(From here on, we're back inside my professional experience)

This I cannot answer since I don't know the typical concentration range of virus RNA in the samples of positive cases.

The lowest concentration of virus RNA that can reliably be detected is called the limit of detection (LoD). In this context, reliably is 19 out of 20 validation samples at that concentration according to the emergency/"shortcut" validation procedure of the FDA (I expect other parts of the world to have similar validation procedures right now). The rFDA has a page with tests that have this emergency approval](https://www.fda.gov/medical-devices/emergency-situations-medical-devices/emergency-use-authorizations#covid19ivd), and the Manufacturer information lists the LoD.

One would relate the lower end of the typical concentration range to the LoD to calculate how many samples could be pooled without the test becoming unreliable. The linked news article hints that this may actually be a limiting factor. The test under development avoids this problem by using more sample material.

There's another limitation to how many samples one can sensibly pool. The aim of the procedure is to save tests. Thus, we need to set up the pooling so that only a small proportion of pooled tests is positive and a large fraction of cases can be "closed" as negative. 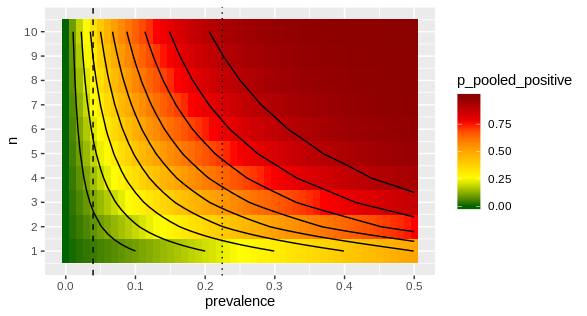 Contours are every 10 %points. Dashed and dotted lines are the current fractions of positive samples for Germany and Italy.

From that, we can calculate how many samples we need to run (for every positive pooled sample, additional n tests) and from that the fraction of tests we save compared to testing each sample separately: 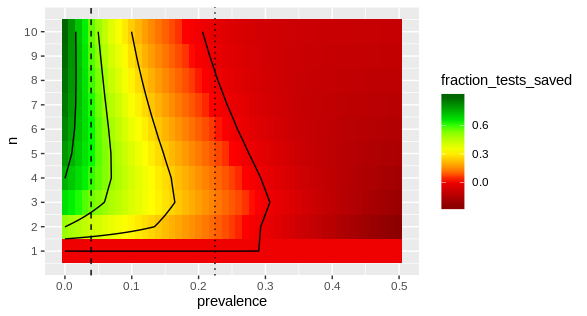 A pooled test would need its own validation and one would also do some additional development to get the required sensitivity (LoD) for the desired number of pooled samples, meaning more delay until pooled tests would be available.

In addition, pooled tests alongside the single tests that are anyways needed would mean additional logistic burden in the labs.

I don't think developing a pooled test would be worth while right now, the more so, as other measures would give similar or better relief:

Doing only 1 test per household would save about 50 % since the average size of a household in Germany is 2 without the need of any new test development.

The same is true for further concentrating the tests on the vulnerable/high risk population.

Thus, pooled tests may help in the containment phase when they'd allow to test a larger number of possible contacts.

Update: Getting back into containment phase is the aim of the current lockdown.

We'd still have high requirements for sensitivity and specificity. This means, pooled tests would have helped most right at the beginning of the epidemic - but they always mean additional R&D and also additional validation needs to be done (and part of the validation work btw. must be done in every single lab that wants to use the test) since they need to be implemented in addition to the single sample method. This means, they'll always be available only after the single sample method is established.

Israel now have the capacity to pool 64 tests in one

“According to the new pooling approach that we have currently tested, molecular testing can be performed on a “combined sample,” taken from 32 or 64 patients. This way we can significantly accelerate the testing rate. Only in those rare cases, where the joint sample is found to be positive, will we conduct an individual test for each of the specific samples,” said Dr. Yuval Gefen, director of the Rambam Clinical Microbiology Laboratory.

which might be useful if there is a person who contacted many hundreds of people. Eg. We have a supermarket worker who tested positive and they were working during their infectious period.

1
What is the principal goal in pooled COVID-19 testing?

2
What is the best protocol and criteria or policy for COVID-19 novel coronavirus testing?
2
Is South Korea doing "random" testing to combat covid-19 epidemic?
3
Why did countries initially presume that detecting COVID-19 requires a deep nasal swab?
2
How often is a Ct of 30 (or more) using the Charité protocol a false positive for Covid-19?
10
Can the specificity of a COVID-19 antibody test be improved by testing twice?
5
Has China announced any results from their massive (new) COVID-19 testing program in Wuhan?
1
What is the principal goal in pooled COVID-19 testing?