What are the clinical presentations of COVID-19 in Children, and what hypotheses are there to explain their relative immunity to fatal disease?

Out of nearly 45,000 confirmed cases in China through February 11, there was only one death in someone younger than 20, according to the Chinese Center for Disease Control and Prevention, and no deaths among children younger than 10.

So children are still catching the disease but just simply not being affected as much as older adults.

What are the dominant theories to explain this response which differs drastically from influenza?

I'm probably not going to do Cristiani at al. (Apr 2) much justice with this answer, but to use just their conclusion figure 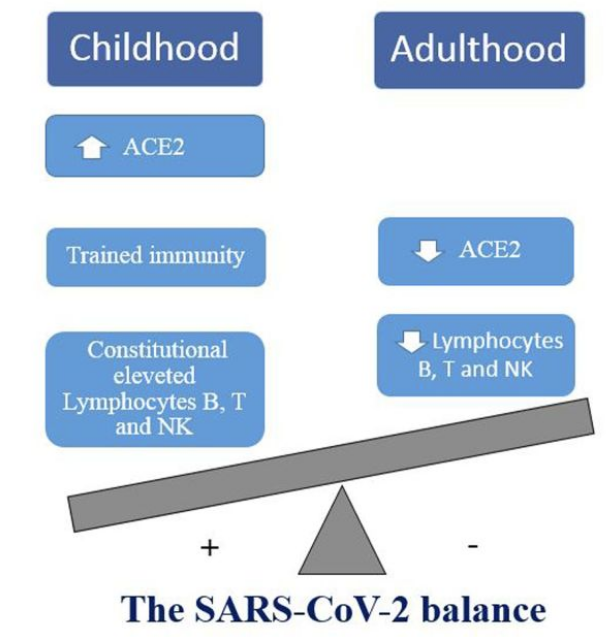 We can speculate that high ACE2 receptor concentrations, trained immunity and a constitutional high lymphocyte count in children may partially explain the mild disease observed in this group of patients (fig. 1). Real reasons will probably remain a mystery fortunately because the number of infected [by which they probably mean tested] children is too low to allow good-sized immunological studies.

By "trained immunity" they mostly seem to mean cross-reactivity to other vaccines administered in childhood. (They do mention NK cells as playing a role in that; see also in-depth Science article on this fairly rencent notion of "trained immunity" aka "innate immune memory".)

Frankly their last argument (high lymphocyte count) seems a bit in doubt because a CDC study (April 10) found that infants <1yo actually might "get it worse" than the 1-17 y.o. group:

So it's not an entirely uniform effect (by age).

Also from the CDC study, another mystery is why male children seem to get it (somewhat) more often:

In this preliminary analysis of U.S. pediatric COVID-19 cases, a majority (57%) of patients were males. Several studies have reported a majority of COVID-19 cases among males (4,9), and an analysis of 44,000 COVID-19 cases in patients of all ages in China reported a higher case-fatality rate among men than among women (10). However, the same report, as well as a separate analysis of 2,143 pediatric COVID-19 cases from China, detected no substantial difference in the number of cases among males and females (5,10). Reasons for any potential difference in COVID-19 incidence or severity between males and females are unknown. In the present analysis, the predominance of males in all pediatric age groups, including patients aged <1 year, suggests that biologic factors might play a role in any differences in COVID-19 susceptibility by sex.

An article in National Geographic summarizes several theories on why COVID-19 is less lethal in children (but not infants): https://www.nationalgeographic.com/science/2020/03/coronavirus-spares-most-kids-these-theories-may-help-explain-why/

They cite Ming S. Yip et al. (2011), which implicates antibody-dependent enhancement (ADE) triggered by prior infections of other endemic coronaviruses (common colds). Ming suggests that because adults have more past exposure to priming strains of coronavirus, SARS-CoV-1 is able to enter human immune cells through an antibody-mediated pathway. See: https://www.ncbi.nlm.nih.gov/pmc/articles/PMC3019510/

2
What is the estimated weight of COVID-19 viruses present in the body of someone with the disease?
4
What are the risk factors currently thought important for disease severity in COVID-19?
1
"Children are not the drivers of the covid-19 pandemic / closing schools is an ineffective policy": sources, backup?
2
In the Moderna phase 3 clinical trial of the vaccine for COVID-19 what is in the placebo?
7
How do mRNA vaccines work and what are their advantages over traditional vaccines?
2
Are there any randomized clinical trials being conducted on TMPRSS2 inhibitors for Covid-19 treatment?
1
Are the covid-19 vaccines more protective against severe disease and death than against simple infection?