Why has the Notch1 intracellular domain-transfected MSC expected as the greater regenerative medicine for ischemic stroke?

In Japan, SanBio's investigational regenerative medicine product, SB623, become a hot topic. The 'active ingredient' of SB623 seems to be gene-modified mesenchymal stem/stromal cells. That cells seems to be derived from bone marrow MSCs by using transient transfection with a plasmid vector encoding the human Notch1 intracellular domain. And SB623 seems one of the most famous investigational regenerative medicine product.

However, I still don't understand Mode of Action they assumed.

Is the idea like an anti-inflammatory agent valid even in the chronic phase of Ischemic stroke?

Their main target might be a chronic phase of Ischemic stroke. Actually, Clinical trial information of NCT02448641 says, the eligible subjected patients shall be "Between 6 and 90 months (7.5 years) post-stroke, and having a chronic motor neurological deficit".

However, despite targeting the chronic phase, one of the most important their target seems to be anti-inflammatory.

For example, one paper states that:

"The groundwork for this 2016 stem cell study was laid in 2009, when mesenchymal stem cells introduced into a cerebral ventricle in a rat stroke model, significantly improved function while enhancing the production of the anti-inflammatory cytokine IL-10 and, crucially, decreasing TNF levels."

And, other paper states that:

"Compared to the parental MSCs, SB623 cells appear to exert a greater inhibitory impact on the maturation of dendritic cells as demonstrated by a greater reduction in the surface expression of the co-stimulatory molecule, CD86."

Why Does Anti-Inflammation Reduce Chronic Stroke Volume? By helping intrinsic recovery? If so, can a similar effect be expected with BBB-permeable immunosuppressants such as FK506?

Why does the transfection of "Notch1 intracellular domain" enhance the regenerative ability of MSCs?

Their other primary focus seems to be a "paracrine effect" rather than "differentiating allogeneic MSCs into nerves and glia and engrafting them in the patient's body."

In the previous section, I briefed papers mentioning the its paracrine effect on immunity and anti-inflammation.

The following summarizes its paracrine effect on the promotion of nerve regeneration.

One paper state that, "These data demonstrate that SB623 cells tend to support neural cell growth more effectively than their parental MSCs and identify both soluble and insoluble mediators responsible, at least in part, for enhanced neuropoietic potency of SB623."

However, why does the introduction of “Notch1 intracellular domain” increase the paracrine effect of MSCs?

Am I right if I understand that, the transfected gene of SB623 be not whole of Notch1 but a segment of the nucleotide sequence encoding "Notch1 intracellular domain"?

Notch1 protein is a single-pass transmembrane receptor, not a cytokine.

I may find question 3.3's answer in WikiPathologica (Written in Japanese). Following image is quoted from this site with minor modification. This introduces the structure of Notch1 itself, but does not explain what was transfected into SB623. However, perhaps a gene corresponding to the part circled in red in the figure has been transfected. 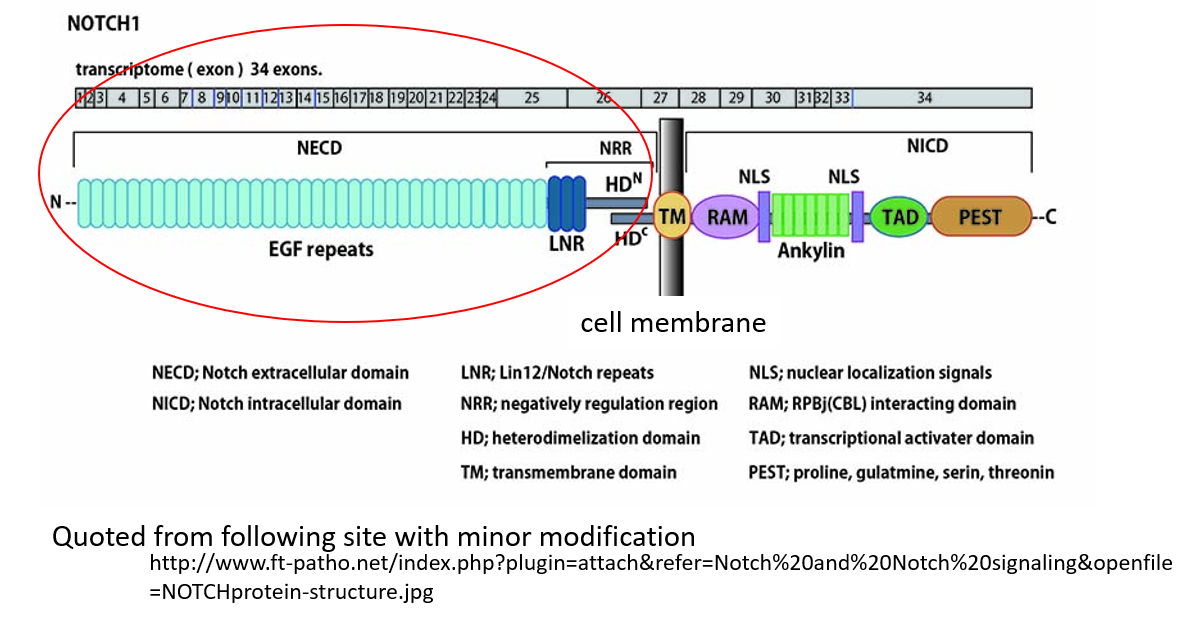 Browse other questions tagged brain stroke stem-cells genetic-engineering or ask your own question.

2
Why isn't there a larger effort to reverse and block the effects of androgens on skin?