What is the specific mechanism for ketoacidosis in Diabetes Mellitus?

What is the specific mechanism for ketoacidosis in Diabetes Mellitus? As far as I have understood it goes something like this::

Can somebody confirm or correct me in this?

The pathogenesis of diabetic ketoacidosis (DKA)

Below is a summary of diabetic ketoacidosis (DKA) from this source:

It occurs when absolute or relative insulin deficiency inhibits the ability of glucose to enter cells for utilisation as metabolic fuel, the result being that the liver rapidly breaks down fat into ketones to employ as a fuel source. The overproduction of ketones ensues, causing them to accumulate in the blood and urine and turn the blood acidic.

Here is a visual summary of the pathogenesis of DKA, then from this source. 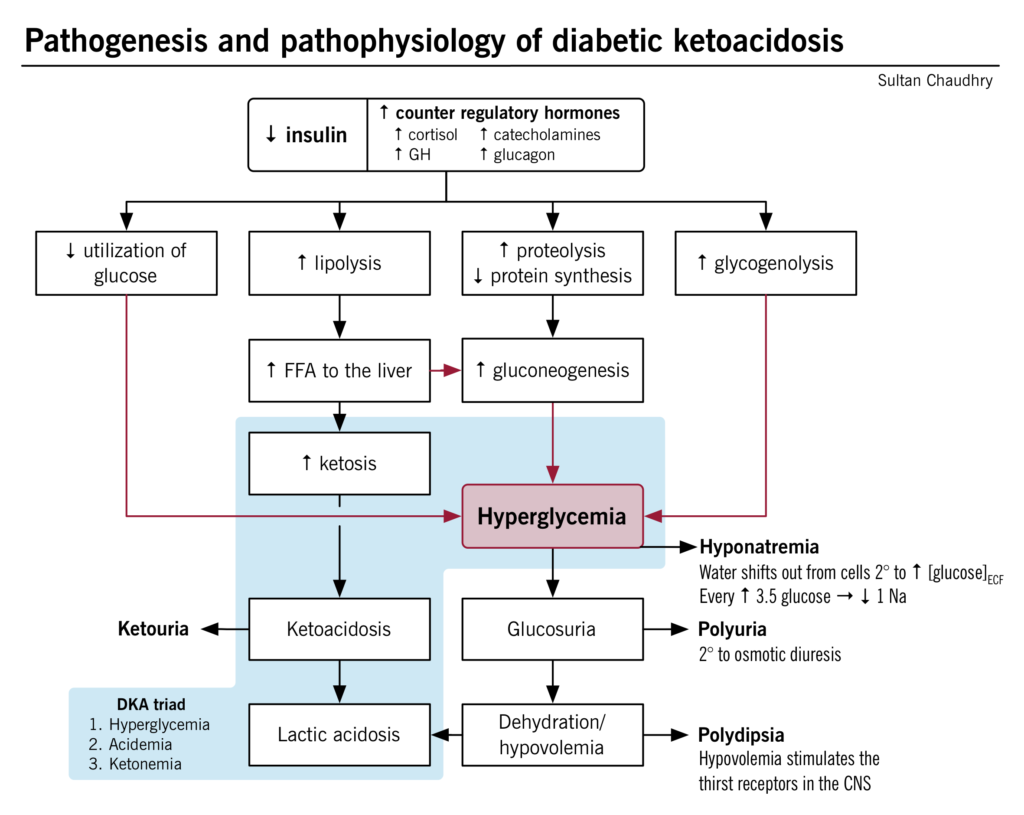 You can see that it is a complex process with many factors. DKA is more likely in a pro-inflammatory state, such as during an infection, which is a common trigger. It is a complex interplay between various factors resulting in disruption to carbohydrate, lipid and protein metabolism and results in fluid and electrolyte imbalance.

Essentially the lack of insulin causes increased gluconeogenesis (production of glucose from non-carbohydrate sources like fat and protein). The liver breaks down fat into ketones to use as an energy source, but these accumulate and alter the pH of the blood (this is the ketoacidosis). The rising glucose levels (due to gluconeogenesis and reduced utilisation of glucose) causes an osmotic diuresis, resulting in loss of fluid, dehydration, renal impairment and then reduced ability for the kidneys to correct the electrolyte abnormalities.

Oxaloacetate and acetyl coenzyme A

You mention oxaloacetate and acetyl coenzyme A in your question. These biochemicals are part of the normal mechanism of cellular respiration (how cells produce energy). Disruption to their metabolism has a significant role to play in diabetic ketoacidosis. This is adapted from Medscape:

Ketones are produced from acetyl coenzyme A mainly in the mitochondria within hepatocytes (liver cells) when carbohydrate utilisation is impaired because of relative or absolute insulin deficiency, such that energy must be obtained from fatty acid metabolism.

High levels of acetyl coenzyme A present in the cell inhibit the pyruvate dehydrogenase complex, but pyruvate carboxylase is activated. Thus, the oxaloacetate generated enters gluconeogenesis rather than the citric acid cycle (also known as the Kreb’s cycle) as the latter is also inhibited by the elevated level of nicotinamide adenine dinucleotide (NADH) resulting from excessive beta-oxidation of fatty acids, another consequence of insulin resistance or insulin deficiency.

The excess acetyl coenzyme A is therefore rerouted to ketogenesis, rather than the Kreb’s cycle.

The question is not primarily about the treatment of DKA, but it is worth noting a brief overview. Treatment has the following aims:

Hyperglycaemia is managed using insulin. Careful correction of dehydration, electrolyte abnormalities and acid-base balance is necessary, usually using intravenous fluids and electrolytes with frequent monitoring of blood electrolytes and pH (which must not be corrected too quickly).

Nyenwe, Kitabchi. The evolution of diabetic ketoacidosis: An update of its etiology, pathogenesis and management. Metabolism, 2015

Medscape - What is the role of acetyl coenzyme A in the pathophysiology of diabetic keyoacidosis (DKA)?

Not the answer you're looking for? Browse other questions tagged diabetes metabolism biochemistry ketosis ketone or ask your own question.

9
What is the cause of Type 1 Diabetes?
4
Health I.D for diabetes - What is the preferred method of identification?
5
Preventing diabetes mellitus
8
Is it possible to have diabetes for about 9 months without knowing it?
4
Is brown sugar better than white for diabetes?
2
Chlorophyll supplements: metabolism of chlorophyll in the human body and proof for resulting health benefits?
3
Linkage between Fatty Acid Metabolism and Ketone body metabolism
1
Why is there no ketoacidosis in Type 2 diabetes mellitus?
2
What is the rationale of using Metformin in Pre-Diabetes and Type 2 Diabetes?