Is there an interaction between methamphetamine and dental anesthetic? 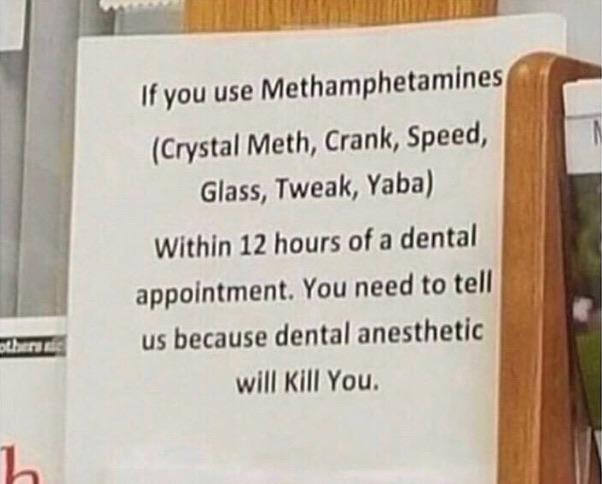 If you use Methamphetamines (Crystal Meth, Crank, Speed, Glass, Tweak, Yaba)
Within 12 hours of a dental appointment. You need to tell us because dental anesthetic will Kill You.

This interaction relates to a broad family of hormones called catecholamines. There are many examples and they share a common structure.

Notice the common structure of catechol (the carbon ring with two hydroxyl (OH) groups) and an amine (NH2) group.

Methamphetamine is a stimulant drug. This information is taken from a paper on the pharmacologic mechanisms of crystal meth:

Methamphetamine causes the release of the neurotransmitters dopamine, norepinephrine and serotonin and activates the cardiovascular and central nervous systems.

Methamphetamine is similar to other amphetamines and cocaine, in that it has stimulant properties, but it also has a longer elimination half-life. It takes longer for it to be broken down and removed by the body.

Lidocaine can have adverse effects if a significant amount is absorbed systemically. The effects tend to depress the cardiovascular system, as opposed to the stimulant effect of catecholamines. However, it is the adrenaline which confers the risk in this case, as it is also a catecholamine.

The problem arises due to excessive stimulation of the sympathetic nervous system due to the increased levels of these catecholamines as a result of methamphetamine use, combined with the absorption of additional adrenaline as part of the dental anaesthetic.

This can result in haemodynamic instability and heart arrhythmias (like ventricular tachycardia) as part of a catecholamine surge.

A local anaesthetic without the vasoconstrictor can be offered if there is concern about the risk.

There are some diseases in which there is increased endogenous catecholamines (such as pheochromocytoma). Dental anaesthetic could have a similar risk in these cases. I cannot find specific evidence fo quantify the risk, but this may reflect the fact that these conditions are rare.

Even in common conditions like ischaemic heart disease and hypertension, the vasoconstricting adrenaline may be avoided by dentists.

To answer your final question regarding the stimulant medication used to treat attention deficit hyperactivity disorder (ADHD), I found a source of professional dental education.

Local anesthesia should be used with caution with the patient with ADHD. The dental practitioner should seek to achieve profound anesthesia so that endogenous epinephrine is not released, which could react with medications (especially methylphenidate). In addition, an aspirating syringe must be used to avoid intravascular injections and the possibility of a summation of drug effects from the vasoconstrictor, which could increase BP and heart rate.

So it seems there is a risk with methylphenidate, but this paper implies that it is not as significant as might be seen with methamphetamine use. This is perhaps not surprising as licensed medication will be precisely dosed and monitored, unlike unregulated illicit drugs. Note the suggested use of an aspirating syringe to ensure the anaesthetic mix is not injected intravascularly.

It is also interesting to note the concept of catecholamine release simply due to pain. This demonstrates why good local anaesthesia is useful in the first place.

Dental implications of the patient with ADHD

Not the answer you're looking for? Browse other questions tagged medications dentistry recreational-drugs anesthesia or ask your own question.

5
Dental cleaning and Bleeding
2
Are there any significant differences between Triceba and Toujeo?
3
Relationship between carbonated water intake and cavities?
3
Does eating/chewing honey help prevent gingivitis, periodontal disease and dental caries?
4
What is the difference between the AAO and the ABO?
7
Lactulose and dental decay
0
What is the essential difference between a general numbing agent or a general anesthetic to a general analgesic?
4
Is there a relationship between slope of the plasma concentration-time curve and addictiveness?