So I am currently studying Hematology/CVS and there is some vital microbiology attached to this. I am studying infective endocarditis and one of the Duke's Criteria involves a Lab Diagnosis which further involves culturing the body fluid in something known as a "Castaneda's medium" which is a biphasic medium. I am confused because the last time I read it (from a different resource), it was Brain Heart Infusion Biphasic Medium. I googled and searched a lot and found that the pictures of both looked similar so I was wondering if whether they are the same?

This website lists many substances used as culture media for laboratory testing.

Brain heart infusion (BHI) broth is rich in nutrients and is made from bovine or porcine brain and heart tissue. It is used to grow fastidious organisms like streptococcus, pneumococcus and meningococcus and is used in both adult and paediatric blood culture bottles.

Castaneda medium is biphasic (consists of solid and liquid phases) and is often used to culture brucella.

These two culture media are different, but both could be used. As far as I am aware, BHI is commonly used in blood culture sampling, which is useful in the diagnosis of infective endocarditis and bacteraemia.

These are example blood culture bottles: 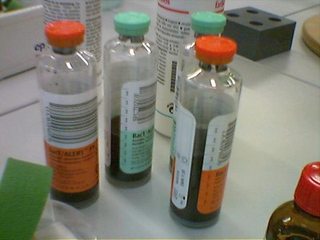 It is usual to take samples in two separate bottles; one designed to culture aerobic organisms and the other for anaerobic organisms (which may use thioglycolate broth, which consumes oxygen).

Not the answer you're looking for? Browse other questions tagged bacteria cardiovascular-disease microbiology or ask your own question.

2
How well established is the connection between insulin resistance and CVD?
4
What is the difference between vasoconstriction and contractility?