How is table salt different from Neti-Pot salt?

I purchased a neti-pot, which came with salt packets: how is this salt different from table salt? Any reference or support is always appreciated 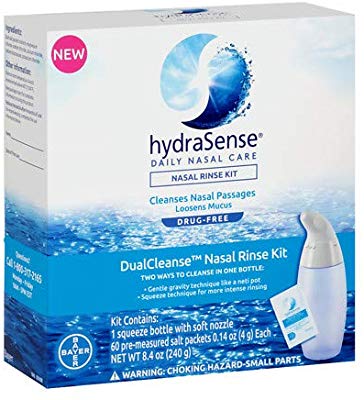 MgCl NaCl, CaCl, Na-Bicarbonate, and KCl can be all found in sea water and therefore in sea salt, which means that this salt appears similar to sea salt, but it is obviously not natural sea salt because the description of this HydraSense salt says:

From this it's not clear if even NaCl itself is artificially produced or maybe they used sea or rock salt, purified it and added the mentioned ingredients.

Other sources (University of Missouri-Kansas City, Brown University) say that un-iodized salt (canning, kosher, pickling, or sea salt) can be used for Neti-Pot. This means salt without iodine, anti-caking agents (such as calcium silicate) or anything else added, which can be then mixed with baking soda (Na bicorbonate). So, "table salt" which typically contains iodine, anti-caking agents and other stuff should not be used. On Family Practice Notebook they say iodine can affect the function of small hair (cilia) in the respiratory tract. For the actual saline solution to be as little irritant to the nose as possible, it should be isotonic, that is 0.9% (9 g NaCl in 1 liter of water).

I've found 4 reviews, all of which say that nasal irrigation with Neti-Pot may be useful for chronic sinusitis and some other conditions in the upper respiratory tract without any significant side effects:

I have found no convincing evidence to say that certain "special" salt, which can be expensive, is better than table salt.

That is not to say that vendors opting for the name 'neti' aren't willing to also add 'exotic' stuff, that's then not beneficial either.

Regular kitchen table salt can be used but will cause problems because of all the additives.

Table salt is sodium chloride combined with iodine sources (for nutrition), stabilizers for the iodine, and anti-caking compounds to make it pour by preventing it from absorbing water from the air.

So supermarket bought regular table salt can be quite a bit too irritating for a nasal irrigation. Depending on jurisdiction not all ingredients have to be listed on table salt.

Nasal irrigation is based on warm saline solution, i.e. salt dissolved in lukewarm tap water. ... However, chemical anti-caking (aka “free-flowing”) additives used in common table salt (e.g. sodium silicoaluminate) produce an unpleasant burning sensation in the nose and are not advised medically or by Yoga instructors.
–– The problems of salt for neti - NetiNext

anti-caking agents or preservatives (these can be irritating to the nasal lining)
–– SALINE SINUS RINSE RECIPE 2019 American Academy of Allergy, Asthma & Immunology.

With just a little chemistry knowledge anyone can conclude: among other things nasal irrigation is used for reducing mucus viscosity. This is clearly not an outcome achieved if adding bentonite into a solution for the nasal cavity. While listed as non-toxic non-irritating, bentonite is used as cat litter, and hence it does in the nose what it does in the litter box: increases viscosity of mucus. This effect is there for all anti-caking agents. Some are directly irritating the membranes, all are doing the opposite of what one wants to achieve.

For the US salt for use in organic products:

Common anti-caking/free-flow agents that are allowed in the US table salt include:

Main sources for bacterial contamination are neither the salts nor the water. Preparing a too large portion of solution in advance and letting it sit, and the pots used themselves are:

Although common and frequently based on potentially dangerous bacteria, contamination is considered a false problem by some experts. They think that the nasal cavity is naturally full of bacteria and the addition of new pathogens is not clinically relevant.

The problem of sterility of the solutions and devices has been debated.

Solutions are at risk of contamination when large volumes of solution based on distilled water, bottled water, or boiled water are prepared at home, maintained in containers and used each time when NI is needed by withdrawing the required amount of liquid. Devices can be contaminated when they are continuously used without adequate cleaning. Lee et al. reported that after one and two weeks of use, irrigation bottles used by adults undergoing endoscopic sinus surgery that were washed with hot soapy water after each use were found to be contaminated by a large spectrum of bacteria, including Pseudomonas aeruginosa, Serratia marcescens, Proteus mirabilis, and Staphylococcus aureus. Similar findings were reported by other authors and, because in many cases contaminating bacteria were the same as those that could cause acute rhinosinusitis, it was suggested that the main source of device colonization was the sinonasal cavities. The risk of contamination seems independent of the type of device. Additionally, the use of a one-way valve irrigation bottle, theoretically capable of reducing the risk of reflux of contaminated solution in the device, was found to be practically ineffective. In contrast, contamination seems to be influenced by the composition of the solution. It was shown that acidic, isotonic saline solutions were more frequently associated with bacterial contamination probably because some of the most common contaminants grow optimally in similar environmental conditions. Finally, contamination was found more frequently with longer durations of NI use. With some exceptions, studies have reported that both bottles and bulb syringes were contaminated after one to two weeks of use in approximately 25% of the cases and in 45% after four weeks.

Not the answer you're looking for? Browse other questions tagged salt or ask your own question.

8
What is the ideal amount of salt intake (daily)?
8
How much mercury is contained in sea salt?
6
Is the heart disease risk arising from salt mediated entirely by blood pressure?
2
Is there evidence that Himalayan Crystal Salt is more healthy than other salts?
1
Salt and bad sleep
5
Minimum Salt Intake
3
Effects of eating too much salt
6
Is salt bad for kidneys?
0
Difference between Salt Tablets and Table Salt