what is the advantages (for patients) in delayed and extended release drugs?

To understand the advantages of Extended Release (ER) and Delayed Release (DR) formulations, the primary differences between them should be highlighted. Taken from "A Clinician's Guide to Oral Extended-Release Drug Delivery Systems in Epilepsy" (italics are mine):

Delayed-Release (DR) Formulations. The US Pharmacopeia (USP) defines DR as a dosage form that does not release the medication promptly after administration. In other words, once a certain amount of time has lapsed, the drug is immediately and completely released. The delayed release may be time sensitive or dependent on the environment (e.g., gastrointestinal pH). For example, an enteric coating can be used to intentionally delay drug release until after the tablet has passed through the stomach. This may reduce drug irritation of the gastric mucosa or prevent gastric juices from inactivating an acid-labile drug.

Extended-Release (ER) Formulations. The USP defines ER as a dosage form designed to release the medication in a controlled manner during an extended period of time, at a predetermined rate, duration, and location following administration. At steady state, the rate of absorption is approximately equivalent to the rate of elimination due to metabolism and excretion.

It is evident that these are essentially two different profiles of a drug, as each type of formulation gives the drug a distinct behavior, which gives the drug better chances for efficacy:

This figure from the above-cited paper demonstrates this discussion very clearly: 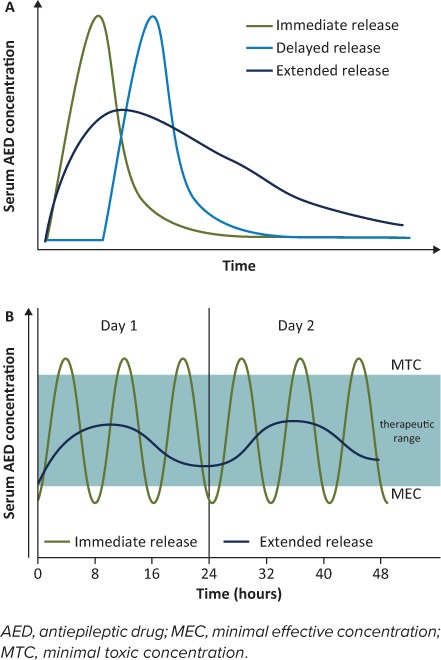 In the top figure, you can see that the pharmacokinetic profile for IR (immediate release) and DR are identical, only the DR profile occurs later, since it is only "postponed" as discussed above. ER, however, demonstrates a profile of a different shape, since the peak is lower, but higher concentrations are maintained for a longer period of time compared to the IR and DR formulations, which give only a short strong peak.

9
Why would it be necessary to take a brand name medication if a generic drug is available?
5
Are generics tested for side effects?
3
What can you infer from an unknown drug from its name
1
Prevent-Release Systems for Opioid Painkillers Vs Placebo
7
How do mRNA vaccines work and what are their advantages over traditional vaccines?
0
Why are some tablets Telmisartan, Amlodipine and Hydrochlorothiazide bilayered and some are not?