So, I have been wondering and couldn't find texts explaining this, but why is the diastolic volume of the circulation ~80, while that of the ventricles is almost 0. To phrase it another way, why does the ventricular pressure oscillate between 120 (systole) and ~0 during diastole, while that in the arteries, it is 120/80 (just assuming ideal case)?

I have not read it from anywhere and it is just some intuitive explanation. I would love it if anyone could verify this as true, or if not, point me towards some resources where I might get the answer. Thanks :)

First, I’ll cover some anatomy and physiology of the heart. 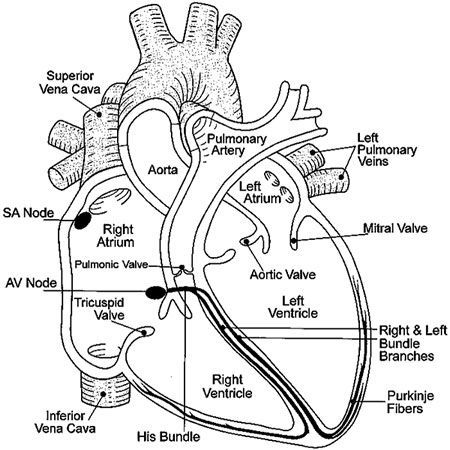 The cardiac output (CO - measured in litres per minute) depends on the stroke volume (SV - blood pumped with each cardiac cycle) multiplied by the heart rate (HR).

Systemic vascular resistance (SVR - often also called total peripheral resistance) is equal to the difference between the mean arterial pressure (MAP) and central venous pressure (CVP) divided by the cardiac output. CVP is usually close to zero, so this is often shortened to:

Importantly, with regard to your question, while peripheral systolic blood pressure is largely due to ventricular contraction in the heart, diastolic pressure in peripheral arteries is due to the walls of the arteries contracting passively after having been expanded during the pressure wave of systole.

This diagram shows the atrial, ventricular and aortic pressures during the cardiac cycle.

This is a pressure volume loop showing the relationship of ventricular pressure and volume during a single cardiac cycle.

You can see from both of these images that there is a point in early diastole where left ventricular pressure drops close to zero, before rising slowly. Later in diastole, the pressure rises gradually and the left ventricular end-diastolic pressure (LVEDP) is commonly measured as a metric of cardiac performance.

This low diastolic ventricular pressure is primarily because a well-functioning ventricle will now be isolated from the systemic circulation by the closed aortic valve. In addition, it will have expelled a significant amount of the blood contained within (a normal ejection fraction (EF) is 55-70%), it is now relaxing and expanding in size and it has not yet received much blood from the atrium.

In heart failure with a impaired systolic function, the ejection fraction (EF) drops, but there is a phenomenon of diastolic dysfunction, where the EF is normal and the problem is impaired relaxation and compliance of the left ventricle. This is commonly linked to hypertension, as displayed in this paper.

This pressure volume loop (in red) demonstrates this effect in diastolic dysfunction. ESPVR / EDPVR = end systolic / diastolic pressure volume relationship (a gradient of the graph or first derivative of pressure with respect to volume). 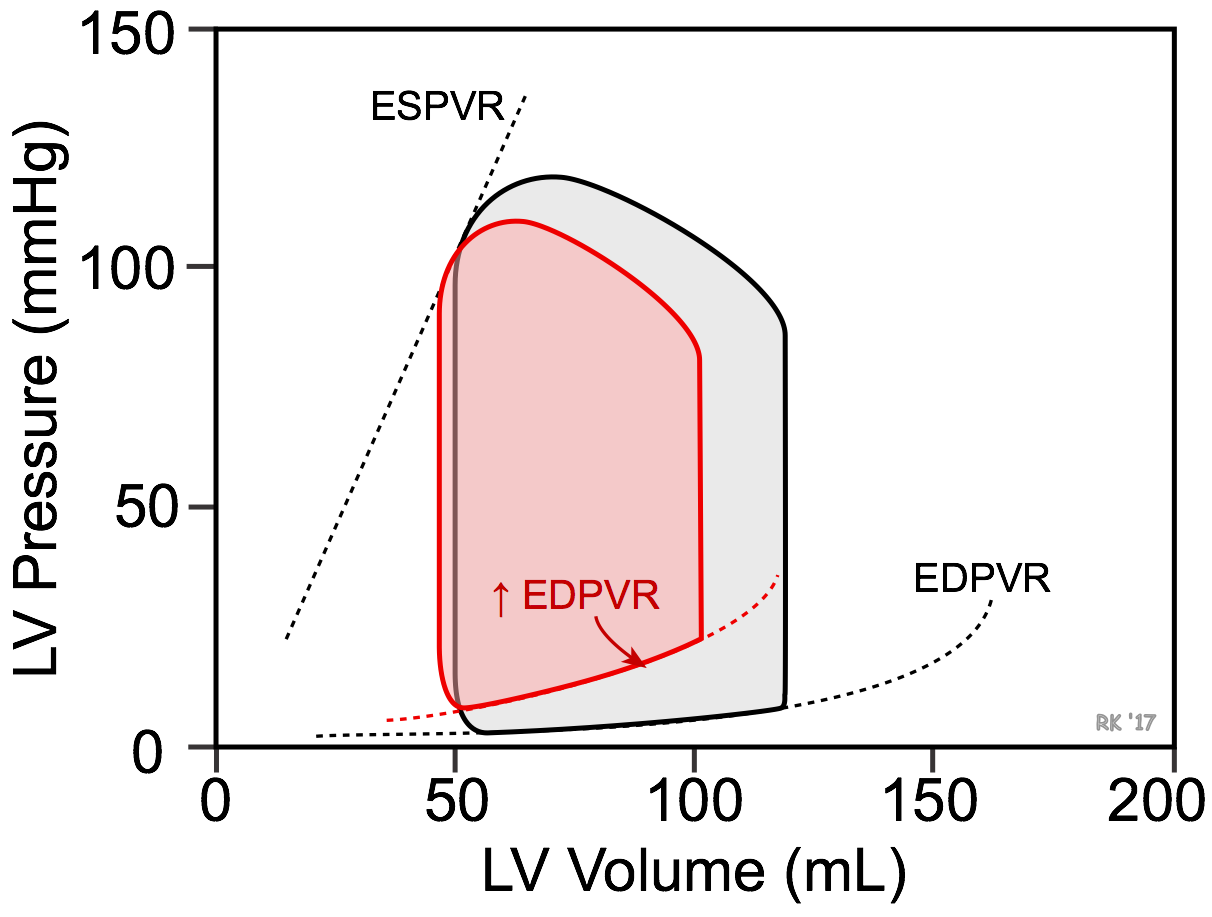 Also, there is evidence of a link between a higher LVEDP and increased mortality when measured during coronary angiography for acute myocardial infarction.