Why is it that psychoactive drugs tend to be dangerous?

I'm personally not a big fan of recreational drugs, illicit or otherwise, but there's an interesting medical question buried in their use.

Why is it that substances that make you feel good tend to be dangerous? The most effective "feel good" drugs — opioids, benzodiazepines, amphetamines, cocaine in all its forms, MDMA, and of course, alcohol — tend to be very dangerous from a medical perspective, with fairly low therapeutic indices and numerous means of causing harm.

the illicit drug supply chain has an incentive to make drugs addictive but safe, as a dead client is a bad client

Theoretically yes, however, safety is a cost factor. Everything from packaging to quality assurance has a price tag on it. It would make the drug trade unprofitable. Illegal trade comes with the benefit of being unregulated as well.

Some of these drugs may actually not be safe for everyone to use. Being in a profitable unregulated business, you would not want to lose valuable customers.

Then there is the problem that the substances themselves do not require improving. The therapeutic indices of practically all recreational drugs are nothing out of the ordinary. They are safe enough for medical purposes as long as they are produced and used in a correct and supervised manner in which they even can be used to treat the addiction to them.

Their safety value drops exponentially when put into a recreational setting. You can compare that with motor vehicles. Not unlike drugs, their safety is significantly lower when used recreationally.

That said, lack of safety is not a particular characteristic of psychoactive substances. Notable examples are caffeine (coffee, tea) and theobromine (chocolate) and even some opioids.

Question: Why is it that psychoactive ("feel good") drugs tend to be dangerous?

The question implies that psychoactive drugs are 1) dangerous and that 2) the reason is in their low therapeutic indices.

Answer: Psychoactive drugs make one feel good, which, for some people, is addictive, so they start to overuse them. Overuse can result in increased tolerance and this in further overuse and overdose, which is the main reason why these drugs tend to be dangerous.

Overdose can result in acute sickness, for example, gastric ischemia with cocaine overdose, or death, mainly due to opioids (130/day in US), but also alcohol (6/day in US).

Street drugs can be adulterated with other dangerous drugs: heroin can be laced with fentanyl, which can cause fatal respiratory depression; ecstasy with "bath salts, which can dangerously increase blood pressure

Emergency room visits due to psychoactive drugs use in the US in 2011 (ussc.gov):

Examples of chronic physical damage due to psychoactive drugs, usually after years of overuse:

Abrupt withdrawal after prolonged use of certain drugs can be deadly:

Withdrawal symptoms can be expected after prolonged use of drugs that cause physical dependence: alcohol, nicotine, caffeine, opioids, benzodiazepines, GHB and hypnotics (barbiturates, zopiclone, zolpidem).

Psychoactive drug overdose is dangerous only if a drug has a low enough therapeutic index.

When psychoactive drugs are not used for therapy, we can't speak about therapeutic indices, so comparable indices, such as "margin of exposure" and "safety ratio" have been developed for these cases.

Margin of exposure (MOE) is the ratio between the lowest dose found to harm health and estimated drug intake in humans. 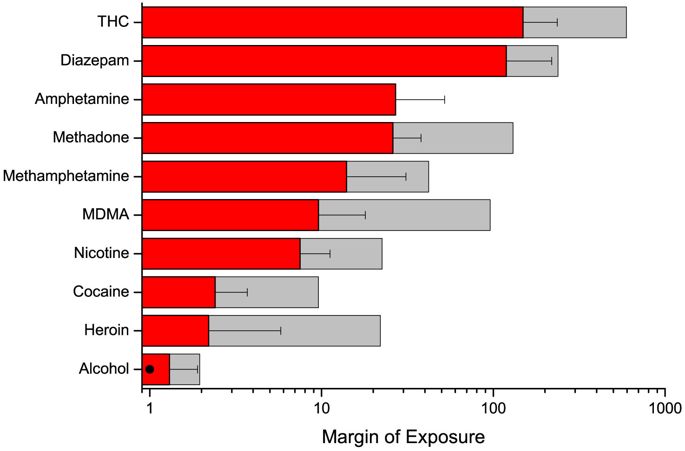 Another source: RS Gable, Addiction, 2004 (pdf) mentions "safety ratio" that "was computed for each substance for reported acute lethal dose with the dose most commonly used for non-medical purposes."

In conclusion, psychoactive drugs can become dangerous when they are overused or overdosed. The danger of a drug can be sometimes explained by its low "margin of exposure" or "safety ratio," but long-term dependence on a drug can be harmful on its own.

Not the answer you're looking for? Browse other questions tagged medications side-effects recreational-drugs safety or ask your own question.

5
Side effects of ivermectin and anti-hypertensive drugs
6
How does a blind person react to hallucinogenic drugs
4
Why some people experience no side effects from a drug?
2
Are there tables that compare deadly effects of various psychoactive drugs?
1
Why is it that some medicines "may" cause a side effect?

// TODO sg: TMP solution until we are confident in our current implementation of async imports // once we are, we can move the if into the js entry file and dynamically load the mark obsolete module