Why is there is no screening for Ovarian Cancer?

From what I have read it is not considered effective to screen for ovarian cancer in non-symptomatic women. Would it not be worth doing an ultra-sound scan, then if there are growths found, do a ROMA test?

Screening tests are done across the population of asymptomatic people at risk of a disease (e.g. mammogram to look for breast cancer in all women with breasts) to try to catch disease early in its course.

Diagnostic tests are done when a patient presents with symptoms.

The ROMA test is a diagnostic test done when a woman presents with an adnexal mass, and uses serum markers (CA125, HE4) to stratify the risk of the mass being cervical cancer in that individual. It is generally done after a pelvic ultrasound, and helps guide decisions regarding biopsy etc.

Currently, most professional organizations including the USPSTF do NOT recommend screening for ovarian cancer:

Benefits of Screening - The USPSTF found adequate evidence that screening with transvaginal ultrasound, testing for the serum tumor marker cancer antigen 125 (CA-125), or a combination of both does not reduce ovarian cancer mortality.

Harms of Screening - The USPSTF found adequate evidence that screening for ovarian cancer can result in important harms, including many false-positive results, which can lead to unnecessary surgical interventions in women who do not have cancer. Depending on the type of screening test used, the magnitude of harm ranges from moderate to substantial and reflects the risk for unnecessary diagnostic surgery. The USPSTF found inadequate evidence on the psychological harms of screening for ovarian cancer.

USPSTF Assessment - The USPSTF concludes that there is at least moderate certainty that the harms of screening for ovarian cancer outweigh the benefits.

Screening for an individual based on their risks (e.g. first degree family members with ovarian cancer, environmental exposures or genetic mutations known to increase risk, etc) is NOT considered population-wide screening, it is something discussed with an individual's physician in their wellness visit, and is based on individual factors.

Once any test (whether screening or diagnostic) is performed, any positive results ABSOLUTELY MUST be followed up by the physician to discuss risks and benefits of the next steps in diagnosis and/or treatment. That is why the risks of diagnostics/treatments of false positive results (which occur at least a small % of the time in any test) have to be considered when deciding whether there is more harm or benefit to screening at a population level.

Without giving an entire lecture on biostatistics... for example, if a screening test were to have a 5% false positive rate, and we screened a population of 1 million women, about 50,000 of those women screened would have a falsely positive result that would result in unnecessary additional tests/treatment. But when considering an individual, many other factors may change the balance of risks/benefits to favor doing testing, so that is why primary care providers are (usually) well trained in both doing and discussing screening tests with patients, to guide each individual in what is best for them.

It's interesting that you picked this one specific example, because it happens to have been studied by Gigerenzer, a prominent expert on risk perception. It also showcases that one shouldn't insist all the time of applying "common sense" to medicine, since facts show that, counterintuitive as it is to both patients and physicians, the screening does not have benefits.

There is a nice citation in Gigerenzer's paper subsuming the facts:

about 3 women in 1,000 in both the screening and the nonscreening group died of ovarian cancer within that time frame, and about 85 in 1,000 in each group of other causes. It further revealed substantial harms within the screening group: 96 women in every 1,000 screened had a false alarm, of whom 32 had their ovaries unnecessarily removed as part of further diagnostic work-up.

So, screening for ovarian cancer does not reduce your chances of dying of ovarian cancer (or dying at all - that part is quite important, since one cannot rely on a death certificate correctly stating the reason for death). If you lost a relative to ovarian cancer, it is normal to have thoughts like "if only she had been tested early enough", but in reality, that would not have helped.

The problem here is that the scenario of "test -> detection -> help" is so firmly rooted in people's ideas about medicine, that the idea of a test which does individually detect a malignancy but is unsuitable for screening just doesn't compute. I recommend reading the full paper (10.1038/s41598-018-35585-z), or try to get hold of some talks by Gigerenzer or his staff, highly interesting stuff.

There are better way of representing this information, and one of them was tested in the paper I cite. I hope you can see easier from it why the screening is not recommended. 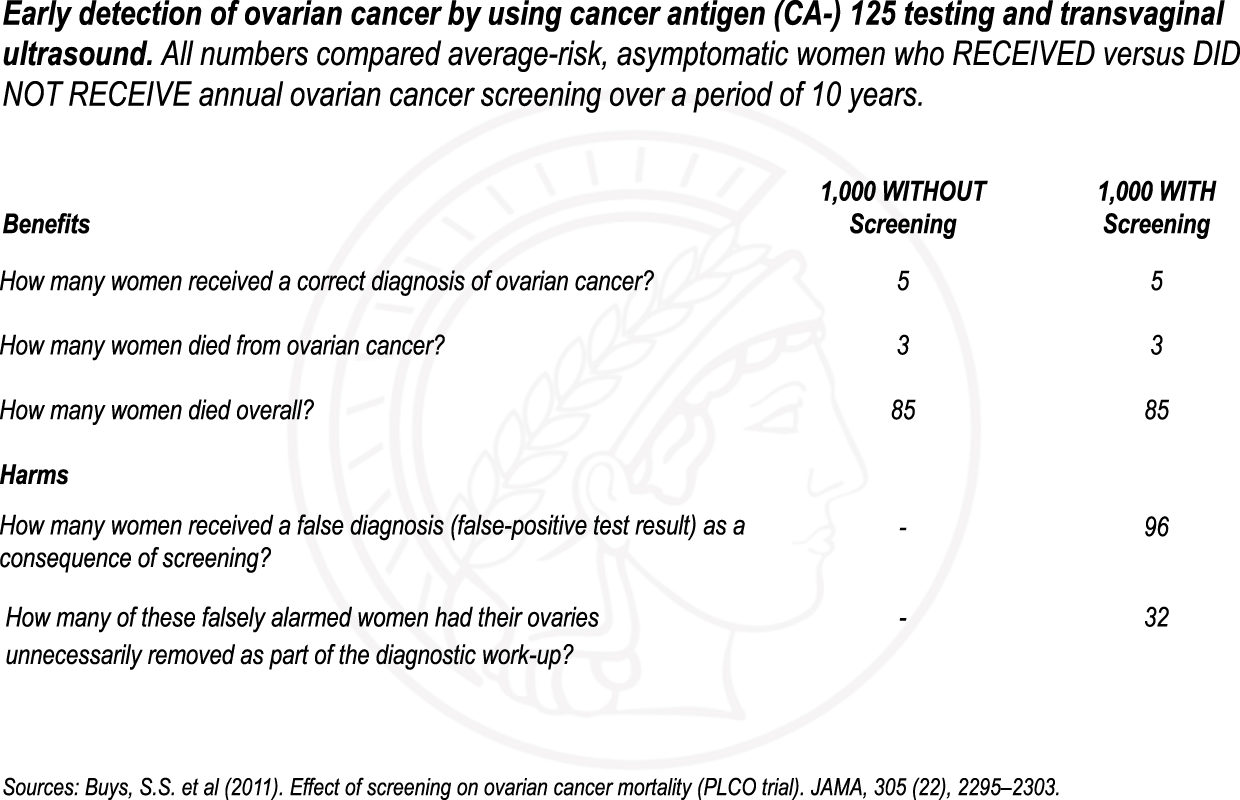 Not the answer you're looking for? Browse other questions tagged ovary cancer or ask your own question.

2
If screening for a disease is not recommended, should someone with positive findings take further action?

52
Is there any health risk in cellular phones?
2
Is eating all natural food and avoiding any kind of proccess food / fertilized (fruit/veg) helps cure cancer?
6
Have candles been linked to cancer?
1
Aphthous ulcer in pancreatic cancer
2
Real dangers of CT Scan made only once at age of 31
3
Why are airplane pilots more likely to have skin cancer?
6
Health risk associated with living close to a power line: Cancer risk & exposure to electromagnetic field
4
Help me understand these descriptions of coal tar
2
If screening for a disease is not recommended, should someone with positive findings take further action?