When is an MRI also an MRN?

I'm not a medical professional. I have just noticed the mention of MRN - Magnetic Resonance Neurography as a diagnostic tool for nerve issues.

Now, I know that MRN is essentially a kind of MR imaging; but - how can I tell (given a results disk), if I've only been MRIed, whether I've also been MRNed? Or is it the case that MRN actually involves a different procedure physically rather than a different way of processing the information from the MR imager?

If you are going to have a Magnetic Resonance Neurography (MRN), also known as MR Imaging of Peripheral Nerves (PNI) (UCSF), a doctor will likely tell you in advance, at least because the investigation may not be covered by your insurance (Neurography Institute).

The MRI and MRN procedures are similar, only that MRN requires more powerful scanners that are usually cylindrical ("closed"), while regular MRI scanners can be "open" or "closed" (images and brief description).

MRN is usually used to check disorders of the nerves that go from the spinal cord to an arm (brachial plexus) or leg (lumbosacral plexus, sciatic nerve) (UCSF).

After the investigation, it should be clearly stated in your medical documentation if you had MRI or MRN.

Magnetic Resonance Imaging is an umbrella term for any medical imaging technique that makes use of the phenomenon of nuclear magnetic resonance. There are many variants depending on how the scanner is configured and analysed, but all are considered MRI.

The basis for the different types of MRI scanning

Much of the following is adapted from MRI Basics.

Essentially, the protons in hydrogen atoms in the water that constitutes your body are sensitive to magnetic fields and align when placed in a very powerful magnetic field. Short bursts of radio waves knock them out of alignment. When the protons realign, they emit radio waves again, which is what is detected by the scanner. This frequency data is processed using a Fourier transform to get the relative intensity at each point in the plane.

Different variations are possible by altering the frequency and timing of the radio energy pulses applied. This gives various sequences such as T1-weighted, T2-weighted, Fluid Attenuated Inversion Recovery (Flair) and diffusion weighted imaging (DWI), which differentiates tissues based on the movement of water. Each is better at evaluating a particular type of body tissue, distinguishing between certain adjacent tissues or detecting a disease process such as inflammation.

This image shows how the brain would appear under T1, T2 and FLAIR sequences.

Gadolinium can be used as a contrast medium, particularly to identify vascular structures. Unlike the radiopaque contrast needed for certain types of plain x-ray or CT, gadolinium (when chelated) is paramagnetic.

There are many types of MRI scan, depending on the anatomical area under investigation and the configuration of the scanner, as detailed above. Here are some examples:

Here is an example image of a magnetic resonance neurography study. It demonstrates the brachial plexus. 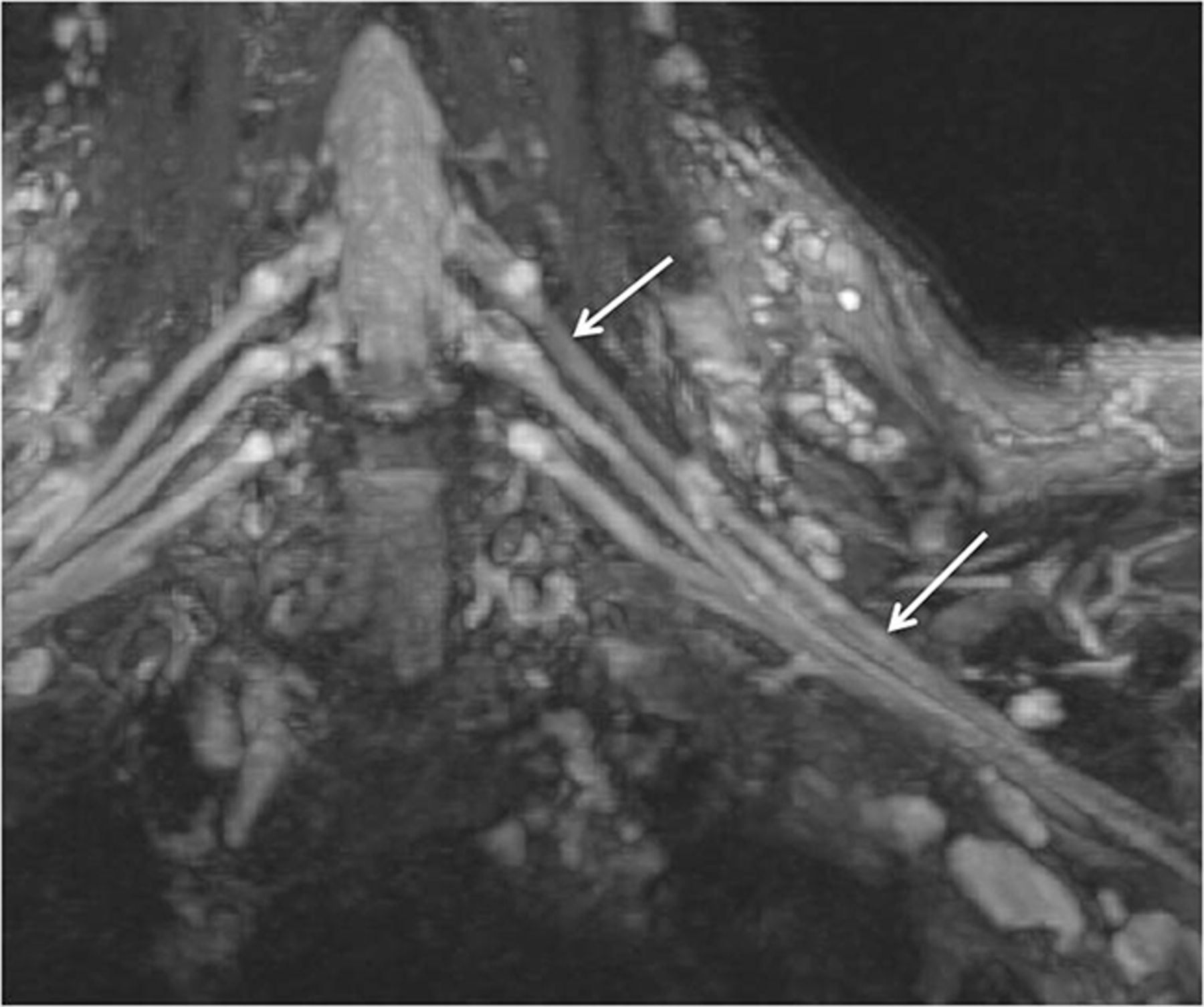 It is likely that an MRN will be done if a nerve needs to be directly assessed (e.g. checking for a specific nerve injury like a nerve root compression of the spine (radiculopathy) or carpal tunnel syndrome). MRN would not automatically be performed when imaging a body area for other reasons (e.g. MRI of chest for lung disease etc). It should be clear on the radiologist's report which sequences and configuration were used.

In summary, the term MRI covers all types of nuclear magnetic resonance imaging. MRN is one example.

Not the answer you're looking for? Browse other questions tagged diagnostics mri medical-imaging or ask your own question.

45
Can MRI scans be dangerous for one's health?
3
MRI scans for diagnosing Crohn's disease?
1
How can an MRI influence the treatment in case of an elbow tendinopathy?
3
MR scanner versus MRI scanner
2
What criteria should I pay attention to when choosing a place to perform an MRI?
4
Number of MRI scanners in the world today?
1
What to do when an earthquake hits while inside a MRI?
1
How important is the experience of the radiologist to diagnose a tendinopathy when reading an MRI?