When would estimates of renal function based on serum and urine measurements differ as greatly as one being normal and the other suggesting CKD 3b?

Renal function (GFR or creatinine clearance) as estimated by serum creatinine and 24-hour urine collection should in theory closely correlate.

However, I have run into a case where they differ greatly. The serum creatinine was measured twice at two separate labs and were in normal range at 0.89 and 1.0 mg/dL, yielding a calculated CrCl of 115 and approx 90. However, the 24-hour urine creatinine clearance results yielded 38 ml/min and 5 ml/min, which would be either acute kidney injury / acute renal failure, or chronic kidney disease / failure (CKD stage 3b and CKD stage 5 respectively). The test was again repeated a third time and again resulted in 1.0mg/dl but this time a CrCl 70 mg/dl.

This is a huge difference with large ramifications in terms of diagnosis and treatment. The question is:

What could be the reason for this, and which measurement is the more reliable one?

I've read several studies that concluded that the serum creatinine alone was actually a better predictor of GFR than urine creatine clearance over 24, 4, and 2h. Every cohort study I found online shows an upper margin of error of around 30% where predicted values from serum creatinine fall and measured clearance levels.

There are various factors at play here:

After reading many studies online it appears the estimated GFR calculated by formulas are rather inaccurate predictors of GFR, and the creatine clearance is a rather imprecise measurement as well. Here's one study showing standard errors that span 100% when comparing calculated vs measured gfr although it suffers from having only 100 subjects: 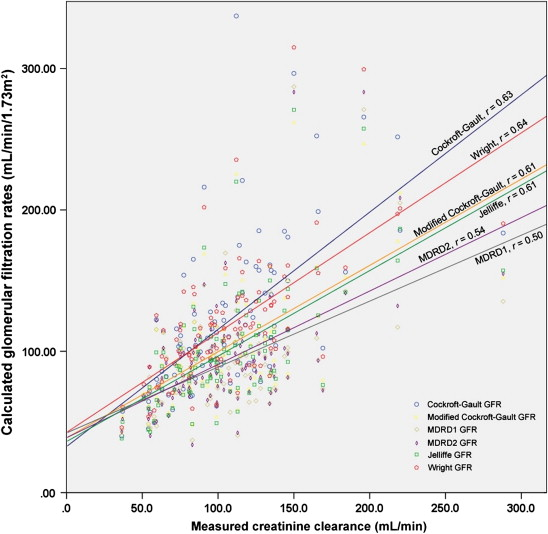 One large cohort study of 45000 has good news for young healthy individuals with low creatinine clearance values: The lower the value the slower the decline with age so that even at the lowest 2.5% of 70Ml your average projection is not kidney failure 40 years later:

A lot of creatinine clearance calculations exist, and a lot depends on the patient (ethnic origin, sex, age, height, weight), so any discrepancies can be considered normal.

The point of multiple calculations led me to the Wikipedia article on creatinine, and to the section on serum creatinine, which admits that the two tests produce incompatible results, saying:

A rise in blood creatinine concentration is a late marker, observed only with marked damage to functioning nephrons. Therefore, this test is unsuitable for detecting early-stage kidney disease.

going on to suggest a better test, eGFR:

On the other hand, urine creatinine tests are used in doping tests:

so perhaps your patient cheated the testing process somehow to avoid being discovered.

Not the answer you're looking for? Browse other questions tagged kidney kidney-disease or ask your own question.