Does a hormone PTSH exist?

It's known that a hormone called TSH (thyroid stimulate hormone) does exist and it's secreted in the pituitary gland. But my question is about a hormone which secreted from the pituitary gland too but it stimulates the parathyroid glands. I am asking it because I read this article and I'm not sure how the science refers to it currently.

In short: It seems, there is not enough evidence to say that parathyroid-stimulating hormone secreted from the pituitary gland exists in humans.

Some texts use the term parathyroid-stimulating hormone with the acronym PTH or in a way that suggests they actually meant parathyroid hormone.

According to current guidelines for high risk patients (i.e. those that are genetically confirmed to have MEN-1), annual laboratory studies to include calcium, parathyroid stimulating hormone, prolactin, gastrin...

^^From this NIDDK article, it is clear that parathyroid hormone is meant above.

I've found a single text that mentions parathyroid stimulating hormone with the acronym PSH, in which they clearly suggest it is secreted from the pituitary gland and stimulates the release of parathyroid hormone.

103.e Parathyrotrophin Hormones (PSH, Parathyroid-Stimulating Hormone) [IT 2] Location: Found on the most central part of wall of intertragic notch, below LM_9.

C) I haven't found any text in which parathyroid-stimulating hormone in humans would be mentioned with the acronym PTSH (like in this article linked from the question, which mentions PTSH in cows).

The pituitary does not have a direct effect on the parathyroid glands.

The parathyroid gland and adrenal medulla are not controlled by the pituitary but play important roles in calcium metabolism and the adrenergic (sympathetic nervous system) function respectively. Source: Science Direct

Although they are located close together, the thyroid and parathyroid glands work independently.

PTH has the following effects:

As a result, calcium levels in the blood will be corrected to normal levels.

The hormone calcitonin has the opposite effect of PTH. It is actually secreted by the thyroid gland itself in response to high calcium levels.

Here is a diagram summarising the role of PTH (source): 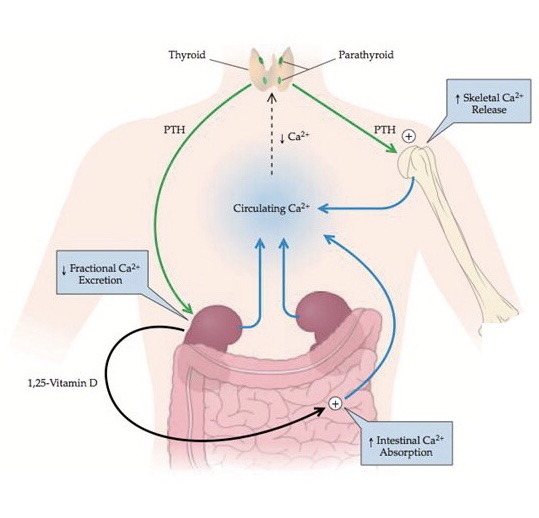 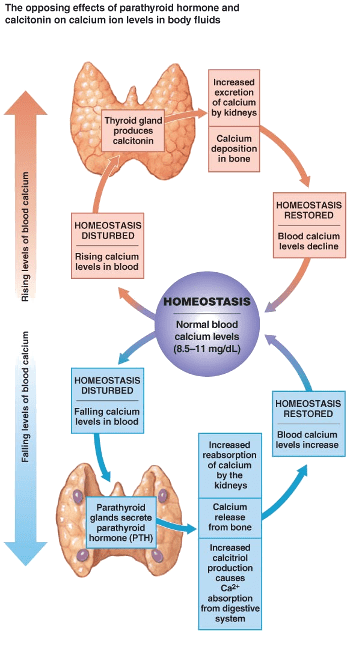 The study you mention relates to cattle and is almost 40 years old. There has been nothing that I can find in human research to suggest the presence of a clinically significant parathyroid-stimulating hormone.

Not the answer you're looking for? Browse other questions tagged endocrinology or ask your own question.

9
Does inhibiting prolactin levels cause any health problems?
8
How does ones TSH tend to vary over the course of a day?
9
Does hyperthyroidism affect serotonin levels?
3
Does blindness stop the production of melatonin?
7
Does elevated potassium lead to elevated cortisol?
6
Is adrenaline a coctail of hormones, rather than one hormone?
5
Could a high TSH level mean a problem with the pituitary gland?
0
Why does adenosine processing require unconsciousness?