Should chronic low cortisol be treated if the patient has no symptoms?

I discovered I have low cortisol levels (11,35 μg/dL) but I never had any of those symptoms listed here. My mom also has low cortisol levels. I have no HIV, no known auto-immune diseases, I believe I'm vaccinated against tuberculosis, however my doctor gave me hydrocortisone pills to take each morning.

It is normal to treat low cortisol levels without symptoms? Is it normal not to perform any further screening of possible causes (my doctor didn't)? 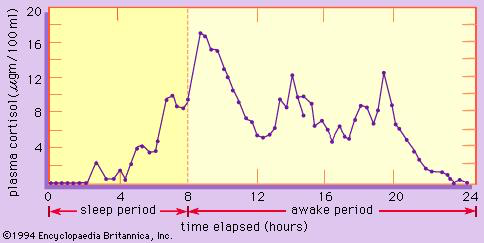 The OP mentioned in comments that this value was obtained four hours prior to his habitual wake time. As shown on the graph above, this is predictably a trough (i.e. low point) in serum cortisol. On the other hand, the "normal" range is likely calibrated for the peak level. (This test is supposed to be done shortly after waking, approximating the peak.) The fact that a value below the normal range was obtained is predictable.

For this reason, a confirmatory test is required to make the diagnosis of adrenal insufficiency. This generally involves administration of ACTH (adrenocorticotropic hormone) – the physiologic stimulator of cortisol production – and assaying cortisol levels at fixed intervals afterward to evaluate for an adequate rise. Only after inadequate adrenal response is demonstrated can the diagnosis be made.3

In direct response to the OP's questions, then:

It is normal to treat low cortisol levels....?

No, except in exceptional circumstances, a confirmatory test is required before treatment.

It is normal to treat...without symptoms?

Is it normal to not do it any further screening of possible causes (my doctor didn't)?

It is standard to follow a low cortisol level with a ACTH stimulation test. On the other hand, if this is only mildly below the reference range of your lab, given the likelihood that what has actually been measured is closer to a trough than a peak cortisol level, one could imagine a scenario where it might be reasonable to drop it. In addition to the reference range, the details of the presenting complaint and any physical exam or laboratory abnormalities would be necessary to make a decision in that regard. This part is beyond the scope of Health.SE.

1. A normal value, on the other hand, can rule out the condition.

2. Note that the numbers are arbitrary; circadian time is not equal to clock time even if they do correspond in an individual accustomed to waking at 0800.

3. As with most things in life, it's actually more complicated. It's possible to have secondary adrenal insufficiency (where the problem involves the brain's production of ACTH) and still "pass" an ACTH stim. test if the condition is of recent onset and the adrenals have not yet atrophied.

All blood levels in healthy humans have Gaussian distribution. 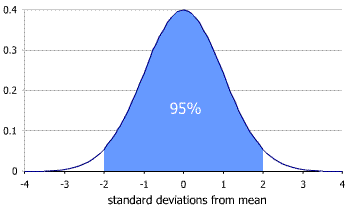 Therefore it is not possible to state an absolute minimum or maximum value for any blood marker. Instead the lower and upper value are chosen in way that 95% of the healthy persons are included.

As so, a blood marker which surprisingly falls below the lower reference value (or above the upper reference value) in the absence of any clinical symptoms is not concerning. It just means that you probably belong to those 2.5% of healthy persons who has a certain blood level below the majority.

Not the answer you're looking for? Browse other questions tagged endocrinology topical-cream-gel cortisol asymptomatic or ask your own question.

5
What are the causes of Chronic Diarrhea?
3
What is the relationship between cortisol and depression?
2
Is it possible to get Covid-19 and have 0 symptoms along the complete journey and hence cure by yourself without knowing?