How does a herniated spinal disk correct itself?

Looking at the picture below, nothing in the herniated disc seems to be able to correct itself over time. Yet, the article I took the picture from says that surgical treatment is used only if the pain is not resolved within a few weeks.

My question is: How exactly can this condition be resolved within a few weeks, with drugs only? What happens to the mechanical deformation - the root cause? 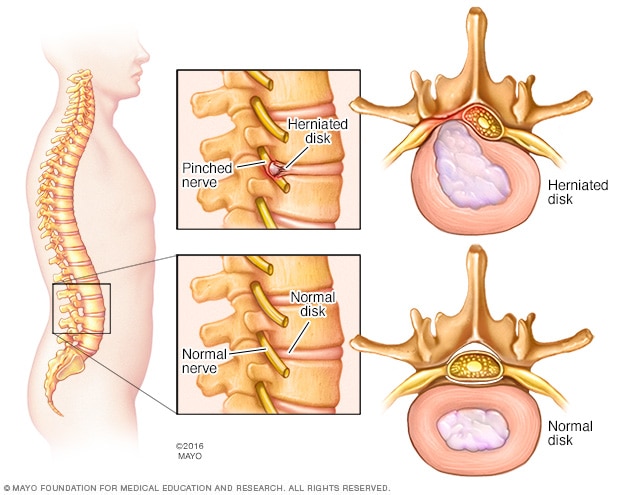 The herniated part of the disc can be resorbed by the inflammatory process, which means that inflammatory cells, such as macrophages, can remove the damaged tissue. The healing time can range from several weeks to months.

The mechanism by which herniated discs are resorbed is not fully understood. It is generally thought that an immune response develops to the disc tissue and inflammation helps to remove the invading tissue.

Massive disc herniations usually reduce in volume and by 6 months most are only a third of their original size. Several studies have shown that the largest discs appear to have the greatest tendency to resolve.

There is insufficient evidence that any treatment, including analgesics, physical therapy, spinal manipulation, steroid injections and surgery result in greater symptom relief 1-2 years after the onset of symptoms than no specific treatment at all (BMJ, 2007, European Spine Journal, 2007).

Early surgery should be considered when symptoms are unbearable, are bilateral, involve the perineum (the area between the legs) or bladder or bowel dysfunction (cauda equina syndrome).

Not the answer you're looking for? Browse other questions tagged back sciatic-nerve or ask your own question.

4
How can I achieve long term activation of the lower back to improve my posture?
3
How to help cure a disc protrusion
0
How do I know I slipped a disc?
2
What causes acne, and how do I get rid of it?
2
Can Spinal Alignment Cause Fatigue?
2
How to differentially diagnose continuing sciatic pain given this existing information?
4
Do NSAIDs hamper herniated disc resorption?
3
Why does metastatic bone cancer present as back pain that is “worse at night”?