If high cholesterol does not cause as atherosclerosis? Then what does?

I frequently come up with articles about the topic such as this one https://www.nhs.uk/news/heart-and-lungs/study-says-theres-no-link-between-cholesterol-and-heart-disease/. Now, if there is no link between atherosclerosis and cholesterol then what causes it?

The NHS page you linked to does quite a good job of explaining why the study that puts forward the claim that there isn't a link doesn't actually quite say that with any degree of certainty. They are a bit wishy-washy about it and the British Heart Foundation takes a somewhat tougher stance

LDL cholesterol (LDL-C), along with other types of cholesterol are widely upheld to be risk factors for cardiovascular disease as opposed to being the "one true cause" and there is very good evidence to suggest that reducing LDL-C levels in the bloodstream reduces the cardiovascular risk of an individual: 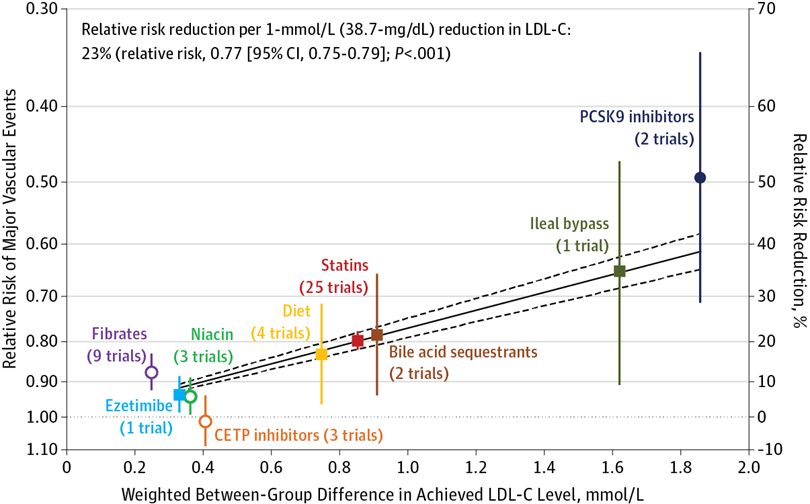 Figure 3 from: Association Between Lowering LDL-C and Cardiovascular Risk Reduction Among Different Therapeutic Interventions A Systematic Review and Meta-analysis JAMA. 2016;316(12):1289-1297.

The above graph shows a noticeable decrease in the risk of a cardiovascular event when the LDL-C levels are reduced - now it's important to note that correlation is not the same thing as causation. So we can't say for sure that lowering the LDL-C was definitively responsible for the reduction in risk, but it does indicate that as the LDL-C level lowers so does the risk.

A study carried out in 2013 also seems to indicate that as the level of reduction is increased the risk decreases further:

This study was mainly looking at statin use vs. control but as per the Silverman et al paper shows the reduction in risk varies depending on the mechanism for reducing the LDL-C used – which suggests that LDL-C level alone doesn't control cardiovascular event risk but that there is an indication of a link.

Crucially this correlation seems consistently to be in the opposite direction to what the Rvanskov et al study claims.

It's generally accepted that there are of course other risk factors besides LDL-C in determining the risk of a cardiac event – smoking, lack of exercise, diabetes, obesity, genetic predisposition etc. And of course it's quite feasible to have more than one of these factors working together to increase the risk levels to the point where a heart attack happens.

For some reason the so-called "cholesterol controversy" seems to persist – and it's a particular hobby-horse of more than one of the authors of the paper in question. At least two of whom have written books about the theory (primary author Uffe Rvanskov and Malcolm Kendrick) and 9 are members of a lobbyist organisation on the subject – "The International Network of Cholesterol Skeptics" ("THINCS") which is a strong indicator of bias, and that the authors might be looking for results that supported the conclusion they already had.

Bias alone does not necessarily mean a study is inherently bad or wrong but there's other warning signs as well, the paper is is what is called a Narrative review where the paper is structured as a narrative, in other words they are discussing and presenting a story rather than presenting a statistical analysis of the data (such as a meta-analysis).

In this case they are describing what they found when they did a certain search on PubMed (an on-line searchable database of medical publications) – and they describe which keywords they used and what exclusions they made. One such search criteria was "NOT trial" – so clinical trials would be excluded from their search.

This is worrying when the later in the paper they say the following:

It is worth considering that some of the participants with high LDL-C may have started statin treatment during the observation period. Such treatment may have increased the lifespan for the group with high LDL-C. However, any beneficial effects of statins on mortality would have been minimal because most statin trials have had little effect on CVD and all-cause mortality, with a maximum reduction of mortality of two percentage points.

Here the authors make an assertion regarding the efficacy of statins in reducing mortality and cite that they have "little effect" and a "maximum reduction of mortality of two percentage points", except they don't cite any such study, and they have explicitly excluded statin trials from their search criteria. We are expected to believe this statement simply because the authors say it is so.

The closest the Rvanskov paper comes to directly addressing this is near the end where they state:

Our review provides the basis for more research about the cause of atherosclerosis and CVD and also for a re-evaluation of the guidelines for cardiovascular prevention, in particular because the benefits from statin treatment have been exaggerated.

And they list three citations for this statement - one is another Rvanskov paper (self-cites don't carry a great deal of weight IMO), a bombastic paper written by another member of THINCS and the Kristensen et al paper which analysed death postponement values during statin trials. The conclusion of that paper makes the fairly unequivocal statement that:

Statins are usually inexpensive and safe, at least in a clinical trial setting, and the benefit in terms of mortality or non-fatal cardiovascular outcomes cannot reasonably be challenged.

So in summary this paper from Rvanskov el al doesn't seem to offer much in the way of strong research and if anything shows strong indicators of bias and IMO it's hard to take it seriously.

The mentioned paper has been published in BMJ Open in 2015: The Association Between Low-Density Lipoprotein Cholesterol and Mortality in the Elderly. A systematic review.

The NHS article mentions the limitations of the review: only participants older than 60 years were included, only LDL (but not HDL) cholesterol was investigated, the effect of statins (cholesterol-lowering drugs) has been ignored and 9 of the authors are members of The International Network of Cholesterol Skeptics, so they may be biased in this regard.

The conclusion of the review that high LDL levels have nothing to do with atherosclerosis is not presented convincingly. Still, there is a need for more precise evaluation of the effect of LDL cholesterol on the atherosclerosis risk. Two things to consider:

Not the answer you're looking for? Browse other questions tagged heart-disease cardiovascular-disease cholesterol heart-attack hypertension or ask your own question.

4
Max heart rate questions
3
Does unfiltered coffee raise cholesterol
2
Do all very old people have heart failure?
4
Did Gary Taubes prove that cholesterol levels between 200 mg/dl and 240 mg/dl are normal and healthy?
1
What is considered moderate when referring to (sub)acute hypertension, hyperthermia and tachycardia?