A message from our CEO about the future of Stack Overflow and Stack Exchange. Read now.

Ask Question
Asked 7 months ago
Active 7 months ago
Viewed 59 times
0
Closed. This question is off-topic. It is not currently accepting answers.

Sexual need between partners/couples often grows time to time. Sometimes it crosses the usual duration like it takes more than an hour to satisfy and it grows more as they continue. But that growing desire may hamper life activities and sometimes the relationship.

Is there is any disorder or any behavioral problem in medical science to define this unusual sexual hunger?

It sounds like you're describing delayed orgasm. I've condensed the relevant bits of the following paper:

Delayed orgasm/anorgasmia defined as the persistent or recurrent difficulty, delay in, or absence of attaining orgasm after sufficient sexual stimulation, which causes personal distress. Delayed orgasm and anorgasmia are associated with significant sexual dissatisfaction. A focused medical history can shed light on the potential etiologies, which include medications, penile sensation loss, endocrinopathies, penile hyperstimulation, and psychological etiologies. Unfortunately, there are no excellent pharmacotherapies for delayed orgasm/anorgasmia, and treatment revolves largely around addressing potential causative factors and psychotherapy.

Delayed orgasm is further classified as lifelong/acquired, generalized/situational, and mild/moderate/severe. An acquired dysfunction establishes that the patient previously had normal orgasm timing. Situational dysfunction implies the man has problems in a particular scenario or scenarios, yet functioning normally in others.

There is no set time threshold for what defines DO. Time threshold for distress is dependent on the partners involved. Some men will reach orgasm with one partner in 15 minutes and have no distress, but with another partner it may cause severe distress because the partner may complain of pain with prolonged intercourse. A population-based survey established that the median intravaginal ejaculatory latency time (IELT) was 5.4 minutes and 2 SD above was approximately 22 minutes. A provider with a patient complaining of IELT longer than 22 minutes will theoretically qualify him for the diagnosis of DO. One should differentiate between problems with of ejaculation and orgasm.

Orgasm is a complex neurobiological process that comes as a result of sexual activity (physical sensation) and/or arousal (cognitive awareness). The physiology of ejaculation is discussed elsewhere. When ejaculation occurs, the brain processes the sensation of the pressure buildup within the posterior urethra (bladder neck and external urinary sphincter are closed contemporaneously) leading up to seminal fluid emission and the contraction of the periurethral musculature. This processing leads to the triggering of an orgasm.

Penile sensation loss has been shown to increase with age. In a literature review by Rowland, he plotted penile sensory thresholds as a function of age as well as sexual functional status. He found that penile sensation loss was more commonly present in those men with increased age and those with sexual dysfunctions.

Delayed orgasm based on situational aspects (i.e., difficulties with a specific partner and not with another) is more likely to be due to a psychological etiology. One study looked at stress and anxiety related to timed intercourse demands for fertility treatments and found DO developed in 6% of patients related to elevated anxiety levels. A novel study by Kirby et al. used a rat model to show how stress can suppress the hypothalamic-pituitary-gonadal axis, which is important in healthy normal sexual function. They showed that acute and chronic immobilization stress led to an increase in adrenal glucocorticoids causing an increase in gonadotropin inhibitory hormone, which suppresses the hypothalamic-pituitary-gonadal axis by inhibition of GnRH. 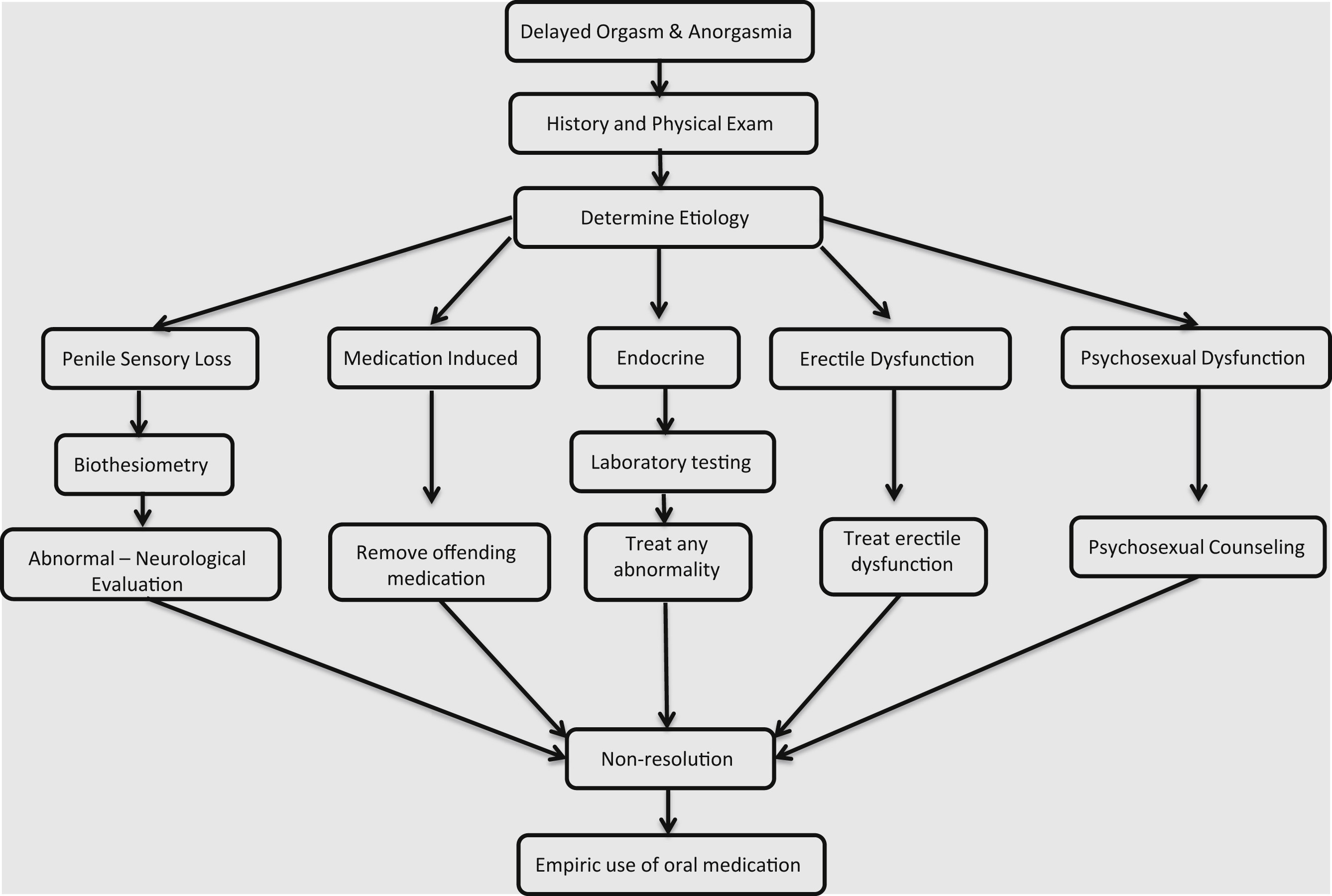 Other possibilities, if I'm misinterpreting your question:

Hypersexual disorder (HD; "a pattern of behavior involving intense preoccupation with sexual fantasies, urges and activities, leading to adverse consequences and clinically significant distress or impairment in social, occupational or other important functions") was considered for inclusion in the DSM-5, but was eventually rejected by the American Psychiatric Association:

The concept of mental disorders has also been condemned by some who suggest it is a value-laden socially constructed phenomena used to impose conformity to cultural norms. Not surprisingly, similar arguments have been launched against the HD proposal with allegations that HD pathologizes normal variants of healthy sexual behavior, and hence, it does not meet the requirements for “deviance.” Another frequent criticism is that HD could be an extension or manifestation of an existing mental disorder. This latter critique should not be quickly dismissed given high comorbidity rates of other mental illness commonly reported among treatment-seeking samples of hypersexual patients. Further, it is widely believed among clinicians working with hypersexual patients that sex is used to “cope” with challenging situations or as a way of “coping” in the wake of emotional distress. Such assertions might imply that hypersexuality is an attempt to compensate for maladaptive systems designed to regulate emotion. Subsequently, wouldn’t the more parsimonious conceptualization of hypersexuality be some type of an emotional dysfunction disorder or an adjustment disorder rather than an independent pathology?

If one argues for HD as an independent disorder, they must also identify which internal functions are failing to operate and advance some theory implicating what mechanisms of action are purported to cause the dysfunction. Sadly, sex researchers investigating hypersexuality have often failed in this endeavor with a few notable exceptions. For example, neurobiological mechanisms linked to sexual excitation and sexual inhibition has been advanced as a plausible explanation for hypersexuality. A broader hypothesis about executive deficits in frontal lobe functioning reported mixed findings where hypersexual patients self-reported executive deficits but did not exhibit executive dysfunctions when tested. Many have suggested addiction, impulsivity, and compulsivity models, although it’s questionable whether these conceptualizations really constitute theoretical models given their lack of specificity, falsifiable testability, or explanatory power for the construct of hypersexuality. Moreover, proponents of these approaches have yet to clearly operationalize and delineate the respective distinct contributions of addiction, impulsivity, or compulsivity as they relate to hypersexual behavior.

While HD wasn't accepted as an established diagnosis, compulsive sexual behavior is a common disorder with similar criteria:

Not the answer you're looking for? Browse other questions tagged sex sexuality or ask your own question.