Did Gary Taubes prove that cholesterol levels between 200 mg/dl and 240 mg/dl are normal and healthy?

I am now holding the original, Polish edition book called "The Hidden Therapies - What your doctor won't tell you" authored by Jerzy Zięba, who is widely considered to be a quack by medical authorities in my country. Nevertheless, the sheer amount of facts (or "facts"?) and research papers cited by Mr. Zięba warrants some closer skeptical attention.

Among many other claims Mr. Zięba says that cholesterol levels between 200 mg/dl and 240 mg/dl are healthy. In particular, he cites Gary Taubes, who in an article titled “The soft science of dietary fat”, published in March 2001 in Science, supposedly proved that:

Did Gary Taubes publish an article claiming these things?

Does this article indeed prove what Mr. Zięba claims it to prove?

Gary Taubes, the journalist and advocate, did publish such an article:

In that article, which is solidly written but not a study, more of an opinion piece, the author argues mainly against dietary advice given out despite being far less clear-cut than it ought to be for that kind of intervention. He does not prove anything in that paper, but merely discusses the pros and cons of the issue. That is by far more nuanced what the claimant in question seems to read into and out of it.

For the claim Jerzy Zięba makes, one might have to look a bit closer at what Taubes writes, or draws: 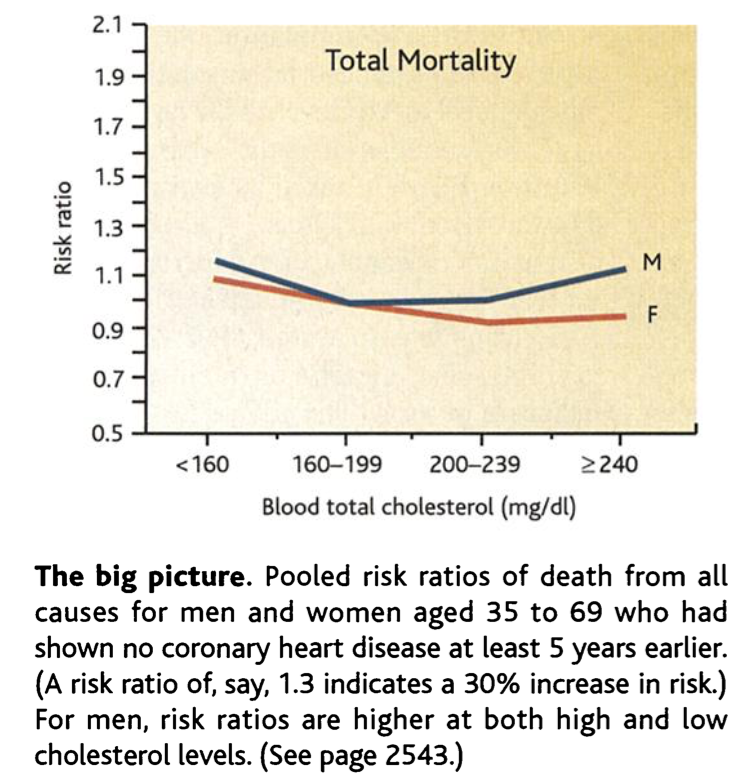 The data were consistent: When investigators tracked all deaths, instead of just heart disease deaths, the cholesterol curves were U-shaped for men and flat for women. In other words, men with cholesterol levels above 240 mg/dl tended to die prematurely from heart disease. But below 160 mg/dl, the men tended to die prematurely from cancer, respiratory and digestive and trauma. As for women, if diseases, anything, the higher their cholesterol, the longer they lived (see graph on p. 2540).

These mortality data can be interpreted in two ways. One, preferred by low-fat advocates, is that they cannot be meaningful. Rifkind, for instance, told Science that the excess deaths at low cholesterol levels must be due to preexisting conditions. In other words, chronic illness leads to low cholesterol levels, not vice versa. He pointed to the 1990 conference report as the definitive document on the issue and as support for his argument, although the report states unequivocally that this interpretation is not supported by the data.

The other interpretation is that what a low-fat diet does to serum cholesterol levels, and what that in turn does to arteries, may be only one component of the diet's effect on health. In other words, while low-fat diets might help prevent heart disease, they might also raise susceptibility to other conditions. This is what always worried Ahrens. It's also one reason why the American College of Physicians, for instance, now suggests that cholesterol reduction is certainly worth while for those at high, short-term risk of dying of coronary heart disease but of "much smaller or ... uncertain benefit for everyone else.

For a very general assessment of Taubes' work, we might look at his concepts of obesity, how it develops and what to do about that:

However, some of the conclusions that the author reaches are not consistent with current concepts about obesity.
Good Calories, Bad Calories by Gary Taubes; New York: AA Knopf –– Review by GA BRay (DOI)

And with regards to cholesterol levels, the information from Taubes is quoted really unfortunate. As I read it he still doesn't say that very high blood cholesterol is "healthy", and the author merely argues that the possible dangers associated with it were overestimated in the past. This then is by far not the current consensus, but not really a fringy quack position either:

Maryanne Demasi & Robert H Lustig & Aseem Malhotra: "The cholesterol and calorie hypotheses are both dead — it is time to focus on the real culprit: insulin resistance", Clinical Pharmacist, 14 JUL 2017

Not the answer you're looking for? Browse other questions tagged cholesterol alternative-medicine or ask your own question.

8
Is there a relationship between vitamin D levels and cholesterol?