Why is the M. supinator not an extensor of the Art. cubiti? 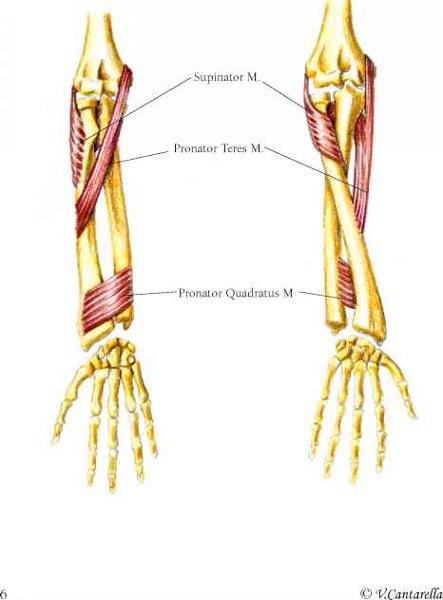 Intuitively, I would expect the latter to also have an affect on the Art. cubiti, as it should extend it. If I attach a string as a substitute for the muscle to the skeleton and pull, the Art. cubiti does get extended a bit.

Point of attachment and direction of force development.

This is like trying to move a door near the handle or at the hinges. Lever forces are weak in one case and almost absent in the other case. It is a difference between small and negligible.

The M pronator teres is already very weak for flexing the elbow, as it is attached at a quite suboptimal position to exert much force in that regard. The M supinator is attached at the elbow but even lower and the direction of force development would also be just about minimally conducive for that.:

Supinator
Deep in the upper part of the forearm, supinator lies concealed by the superficial muscles as it surrounds the upper end of the radius. Its two heads arise in a continuous manner from the inferior aspect of the lateral epicondyle of the humerus, the radial collateral ligament, the annular ligament, the supinator crest and fossa of the ulna. It is often convenient, however, to think of supinator as arising by two heads, humeral and ulnar, between which passes the posterior interosseous nerve to gain access to the extensor compartment of the forearm. From this extensive origin, the muscle fibres pass downwards and laterally to wrap around the upper third of the radius. They insert into the posterior, lateral and anterior aspects of the radius, as far forwards as the anterior margin between the neck and the attachment of pronator teres.

As its name suggests, supinator supinates the forearm, in which there is an anterolateral movement of the distal end of the radius around the ulna causing the two bones to lie parallel to each other. Unless a particularly powerful supinatory action is required, supinator is probably the prime mover. However, if a powerful movement is required, biceps brachii is also recruited. It must be remembered, however, that biceps brachii cannot function as a supinator with the elbow fully extended, and consequently powerful supinatory movements are performed with the elbow flexed to about 120 .

Pronator teres
Forming the medial border of the cubital fossa at the elbow, pronator teres is the most lateral of the superficial muscles in the flexor compartment of the forearm. It arises by two heads – the humeral head and the ulnar head. The humeral head arises from the lower part of the medial supracondylar ridge and adjacent intermuscular septum, as well as from the common flexor origin on the medial epicondyle of the humerus and the covering fascia. The ulnar head arises from the pronator ridge on the ulna, which runs downwards from the medial part of the coronoid process, joining the humeral head on its deep surface. Between these two heads passes the median nerve. The muscle fibres pass downwards and laterally to attach via a flattened tendon into a roughened oval area on the middle of the lateral surface of the radius.

Pronator teres pronates the forearm by producing an anteromedial movement of the lower end of the radius across the ulna, carrying the hand with it. Pronator teres is also a weak flexor of the elbow.

Not the answer you're looking for? Browse other questions tagged muscle or ask your own question.

0
Why can joint pains be felt even when there is no external activity taking place, unlike muscle pains?
7
Why do guys develop "abs" more easily than girls?
0
How should I deal with my leg being tired at the fourth day after the overexertion?
2
Why does an orthotic work instead of an exercise for hammertoe?