What is the significance of 1 second in calculations of PFTs

During PFTs (Pulmonary Function Testing), we take FEV1 (Forced Expiratory Volume in 1 second) and the divide it by FVC (Forced Vital Capacity).

What is so special about FEV in one second, as opposed to a different quantity of time? Why don’t we measure FEV0.5 or FEV1.5?

In the case of spirometry, after taking the deepest possible breath, there are two values used most often:

Obstructive lung pathology, for example what happens in asthma and COPD, reduces the ability to rapidly expel air due to "air trapping" and therefore the FEV1 drops.

Restrictive patterns like fibrosis do not have that kind of air trapping, so the FEV1/FVC ratio is normal or even higher than normal - but FEV1 is lower because the overall lung volume is lower due to the restrictive pathology.

(Of course this is a simplification; there are mixed patterns and fine details that are out of scope of this question.)

Your actual question about why exactly 1 second as opposed to 0.5 or 1.5 is most likely not answerable beyond the above. Often during research on topics, values are chosen because they are simple to use, and then stick. There are a number of odd values in physiology that were chosen by someone who researched it and now we all memorize it. 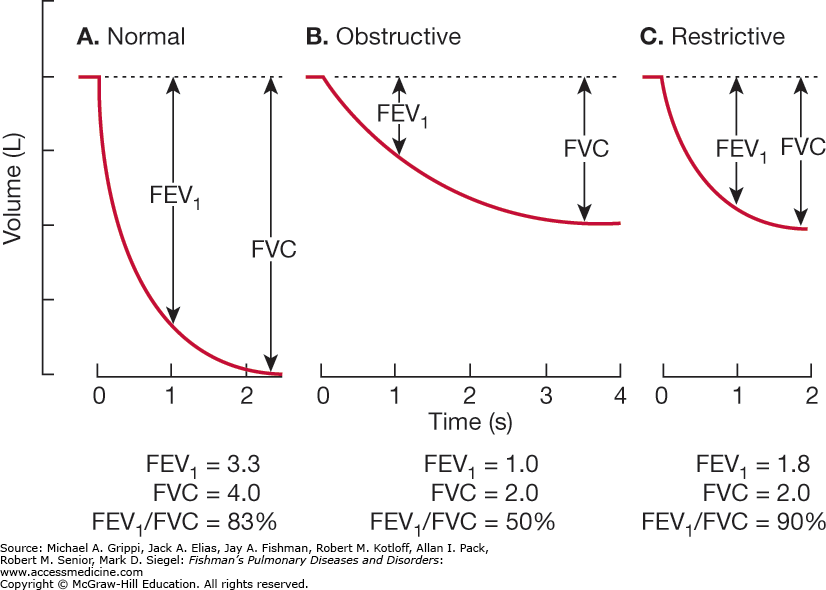 Not the answer you're looking for? Browse other questions tagged lungs or ask your own question.

1
Strengthening / recovering lungs? What is the science behind this?
4
What happens when a person gets the wind knocked out of them?
2
Is it possible for the lungs and heart to work independently of one another?
4
What is the cause of the vaping-related outbreak of lung injuries?
2
What is 'Rising of the lights' as a death?