Has the (in)famous J-shaped curve with regard to alcohol consumption and life expectancy been finally disproven?

Firstly: I am aware of the other question: Is moderate alcohol consumption beneficial for maximizing life expectancy?

Nevertheless, this question dates to 2015, and the recent campaign of medical authorities against alcohol consumption in any quantities is a, well, recent thing. This I believe mandates a newer question.

Shame on me for not being able to find the source; but I DO recall seing an article about the J-shaped curve - the (purpoted?) correlation that moderate alcohol use increases the life expectation relative to teetotallers. I must've read this article a year ago or so, and the article itself is likely even older. The article claimed that:

Nonetheless, as we can see, nowadays we have multiple claims from medical authorities that alcohol is harmful in any quantities, that even moderate or light drinking does one no good and that to minimize risk, a consumption of 0g of ethanol should be recommended.

Has the J-shaped curve been finally conclusively disproven then?

EDIT: A late addition, but I've FINALLY found the source of my claim that studies that removed former alcohol addicts from the group of teetotallers still shew the J-shaped curve: http://content.time.com/time/magazine/article/0,9171,2017200,00.html

This is important to note. All studies, including the ones cited by me and LangLangC, are observational meta-analyses. They take census data and data from other studies and do some statistical calculations with that. Those are accurate, but it is tricky to avoid selection biases, and without a clinical trial, one can only show correlation and not causation. Even with double-blind randomly controlled trials (RCTs), one can run into biases and common factors that fake causation.

As an example for this case: Maybe most 'moderate' drinkers are wealthy (they can afford a bit of alcohol and upper-class drinking, but are well-educated enough not to become addicts) and thus have more access to health services, hence decreasing their morbidity in comparison to other groups. This doesn't mean that drinking moderately is healthy, but that being wealthy is healthy.

With that being said:

Yes, it has been disproven

A recent article published in The Lancet which is the largest meta analysis to date has a very comprehensive overview of risks associated with moderate to high-level drinking. The J-curve only exists for very few hand-picked risks: 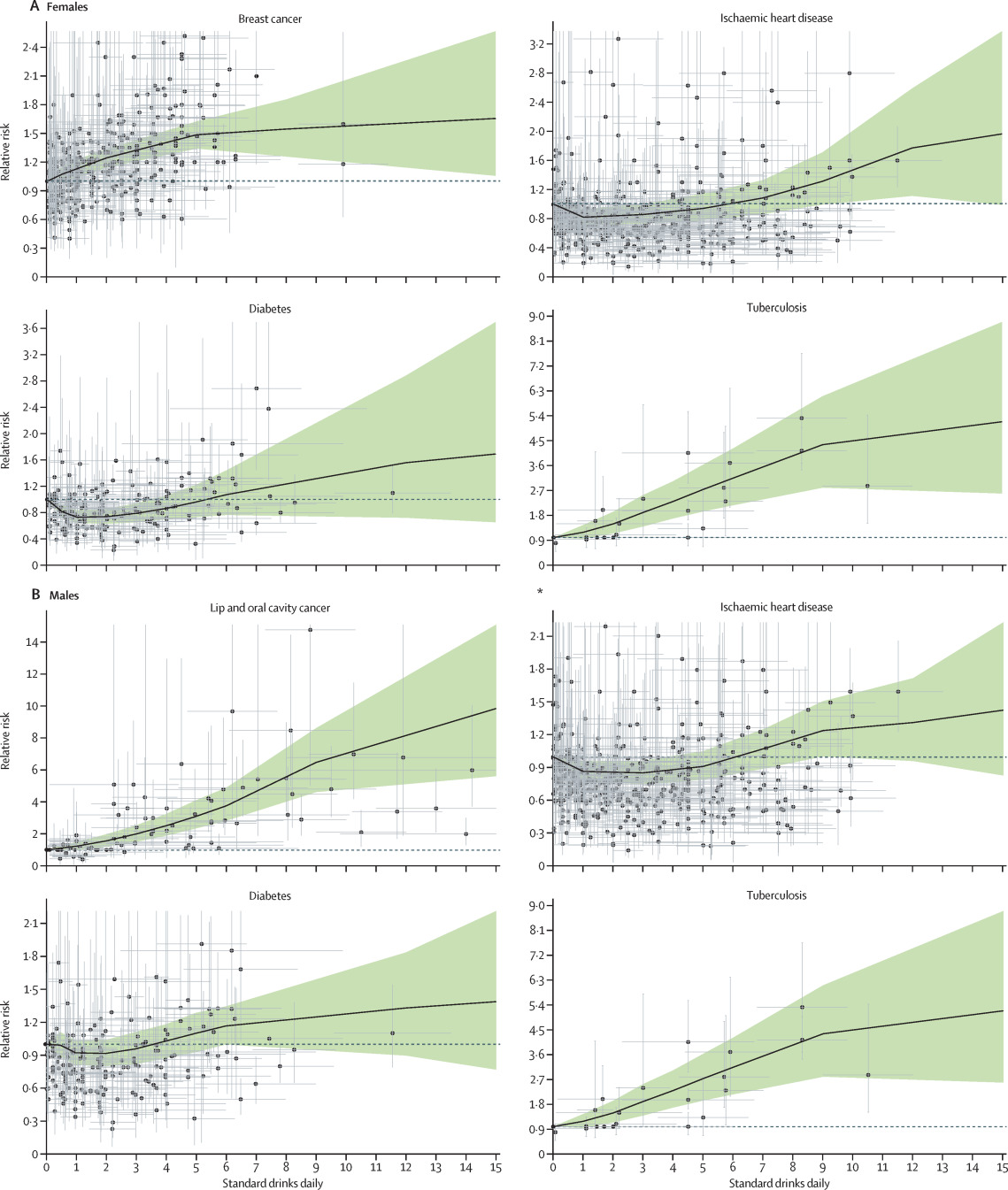 While small amounts of alcohol might decrease the risk of ischaemic heart diseases and diabetes, the cumulative risk is increasing for every quantity of alcohol consumed.

In a sense, it doesn't help you if you are at half the risk of dying from a heart attack when the risk of having a seizure is tripled (greatly simplified). 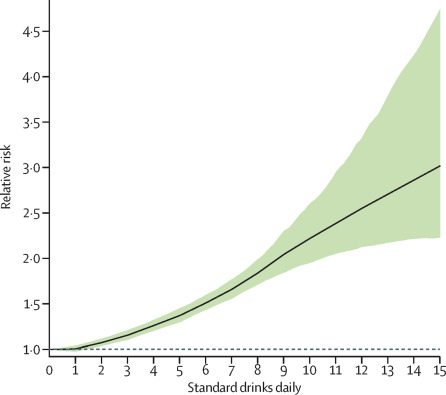 The study itself is quite comprehensive and not that difficult to understand, so I highly recommend a read-through. It has been covered by most newspapers as well, but not all news coverage was accurate.

This is even more convincing as there seems to be a selection bias favouring 'moderate' drinkers.

After reviewing the possible sources of selection bias in observational studies about the relationship between low‐volume alcohol consumption and mortality, selection bias is another reason to suggest that existing research may overestimate protective effects systematically from ‘moderate’ alcohol consumption. There are a number of sources of selection bias inherent in comparing established low‐volume drinkers with non‐drinkers. Low‐volume drinkers who are enrolled into studies constitute a particular group of drinkers who chose to begin drinking, tolerated or enjoyed its effects, did not die prior to study enrollment, did not become heavy drinkers, did not stop drinking and were of sufficient physical and mental capacity to be enrolled into studies several decades after drinking initiation. Overall, most sources of selection bias favour low‐volume drinkers in relation to non‐drinkers. Studies that attempt to address these types of bias generally find attenuated or non‐significant relationships between low‐volume alcohol consumption and cardiovascular disease, which is the major source of possible protective effects on mortality. Furthermore, observed mortality effects among established low‐volume drinkers are of limited relevance to health‐related decisions about whether to begin drinking or whether to continue drinking purposefully into old age.

Prompted by LangLangC's excellent answer, I wanted to expand my answer a bit. The study I cited mainly proves that the relative risk is monotonic increasing: At no level of alcohol consumption, the overall relative risk is smaller than at any previous level. The J-shaped curve does exist for a few risks (mainly associated with cardiovascular diseases).

What conclusions should one draw from this?

The second implication needs to be true in order for the J-curve claim to be valid, and hence I consider it disproven.

No. "The J-curve" was not recently disproven, but the evidence for it slightly modified. The correlational observation is still that no and low amounts of drinking do not have seriously negative health outcomes associated with them.

What has changed is what conclusions campaigners for "zero alcohol" draw from that evidence.

We do not have any evidence that any intervention on that level has positive consequences: either recommendations of moving from zero to one or from two to zero seems to not be founded on firm evidence. Only going lower from high is.

It seems to depend on the way the observational, epidemiological and correlational data is used. That is: how the data is gathered, analysed and interpreted. And how puritan the belief systems of the researchers are.

Drinking large amounts of alcohol is bad. Doing that daily is bad. A relative recent study amassed a huge dataset and concluded that the only safe amount of alcohol is zero. This got even published in The Lancet as

"Alcohol use and burden for 195 countries and territories, 1990–2016: a systematic analysis for the Global Burden of Disease Study 2016"

The key findings are communicated in the extreme, globally, and badly:

Analysing data from 15 to 95-year-olds, the researchers compared people who did not drink at all with those who had one alcoholic drink a day.
They found that out of 100,000 non-drinkers, 914 would develop an alcohol-related health problem such as cancer or suffer an injury.
But an extra four people would be affected if they drank one alcoholic drink a day.
For people who had two alcoholic drinks a day, 63 more developed a condition within a year and for those who consumed five drinks every day, there was an increase of 338 people, who developed a health problem.

That is from a baseline of 914 problems in 100000 people an increase to 918 people in 100000 for one drink a day. As one can see, problems usually related to alcohol develop in 914 non-drinkers already or as well and one drink a day means trouble for an additional 4 people.

Is much or not? If that is difficult to picture mentally, The Lancet provides you the service of a picture that gets overlooked in the sensationalist press: 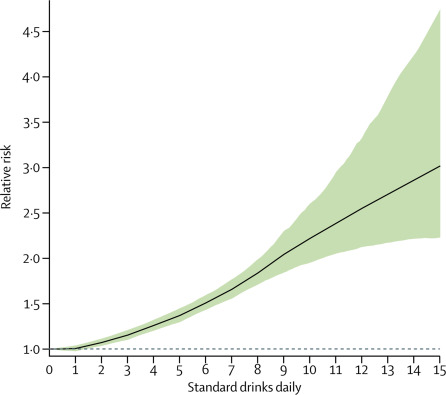 The relative risk increase – in a study that claims zero is the only safe level – for one drink per day is effectively zero as well.

This study aims at scare mongering and has to admit that

Alcohol use is a leading risk factor for death and disability, but its overall association with health remains complex given the possible protective effects of moderate alcohol consumption on some conditions.

This study still does not challenge "moderate alcohol consumption may be preventive for some conditions such as ischaemic heart disease and diabetes" but looks at the effects associated with each individual health outcome together with level of alcohol consumption. When those inferences are then combined into an aggregate according to the author's model we arrive at the picture above.

Specifically, comparing no drinks with one drink a day the risk of developing one of the 23 alcohol-related health problems was 0.5% higher — meaning 914 in 100,000 15–95 year olds would develop a condition in one year if they did not drink, but 918 people in 100,000 who drank one alcoholic drink a day would develop an alcohol-related health problem in a year.

How do experts judge this data?

David Spiegelhalter, Winton Professor for the Public Understanding of Risk at the University of Cambridge, said:

“According to data provided by the authors but not published in the paper, to suffer one extra alcohol-related health problem, around 1,600 people would need to drink two drinks totalling 20g (2.5 units) of alcohol a day for a year. This is equivalent to around 32 standard 70cl bottles of gin over a year, so a total of 50,000 bottles of gin among these 1,600 people is associated with one extra health problem. This indicates a very low level of harm in moderate drinkers, and suggests UK guidelines of an average of 16g a day (2 units) are very low-risk indeed.

This same year another Lancet paper tried to tackle the problem:

Angela M Wood et al.: "Risk thresholds for alcohol consumption: combined analysis of individual-participant data for 599 912 current drinkers in 83 prospective studies", Volume 391, Issue 10129, p1513-1523, April 14, 2018
Low-risk limits recommended for alcohol consumption vary substantially across different national guidelines. To define thresholds associated with lowest risk for all-cause mortality and cardiovascular disease, we studied individual-participant data from 599 912 current drinkers without previous cardiovascular disease.
In current drinkers of alcohol in high-income countries, the threshold for lowest risk of all-cause mortality was about 100 g/week. For cardiovascular disease subtypes other than myocardial infarction, there were no clear risk thresholds below which lower alcohol consumption stopped being associated with lower disease risk. These data support limits for alcohol consumption that are lower than those recommended in most current guidelines.

Again, a call "to lower guidelines". Despite the result that for some outcomes the lowest risk was not "zero drinks" but that the relative risk increases, clearly, if you go below 100g of pure alcohol a week!

Do these numbers really suggest that not drinking alcohol – either never or even worse to quit drining – is to be seen as a potential risk factor? The huge difference between never-drinkers and ex-drinkers might spoil that party a bit. An equally plausible explanation for that is that dislike for alcohol might be a sign for already frail or future health problems.

The vast majority of findings show that moderate drinking (definitions of that may vary as much as does individual tolerance) is associated with a low risk and that there is an ultimately unexplained correlation between drinking a bit and slightly longer life expectancy. The French Paradox keeps on giving.

Not the answer you're looking for? Browse other questions tagged alcohol life-expectancy or ask your own question.