I'm sure most of you here are in a similar position to myself - we work in an open plan office, we go to a public gym, have kids (little germ magnets)... lots of opportunities for catching coughs & colds which force us to temporarily stop training. We are even more susceptible after hard workouts.

I want to ask what are the commonly-used methods, routines & supplements for preventing these kinds of illnesses. I take L-Glutamine once a day before bed, along with my vitamin & mineral tablets but it is still not guaranteed to keep me well. Occasionally when I am ill I take a Vitamin C & Zinc (combined) tablet.

I wonder if I am missing something in my routine.

I believe this is the right place to ask, since the heavy workouts mean we are more likely to get ill as opposed to somebody who just goes to the office & back each day.

First, let me say that I highly doubt your assertion that workouts make you more likely to get ill than someone who "just goes to the office & back each day." I don't know what you base that assertion on and I think you're 100% wrong until you can provide evidence to support it. Working out and staying fit have the exact opposite effect, if anything. Why are you even doing it if you think being fit makes you sick?

That said, it is true that you touch a lot of surfaces at a gym that many other people touch, and that does indeed open a pathway to infection. I don't know that you touch more surfaces than an office worker does, but for the sake of argument let's suppose you do.

There are many well known prevention strategies, and quite frankly few of them that are actually known to work involve supplements, vitamins or anything else you have to pay for. Most mainly involve soap.

In my personal experience, which comes with significant scientific backing, two simple things will prevent more upper respiratory infections than anything else you can do:

1) Wash your hands -- well and often. And since you can't do that as often as you should, carry a bottle of alcohol hand sanitizer in your car, your purse, or wherever you'll actually have it when you need it. Use it whenever you leave a public place. And in the gym, use the sanitizer they (should) have all over the place.

2) Do not ever touch your eyes, nose or mouth with your fingers. No, not ever, not even once. When your eye itches, rub it with a tissue or even your sleeve if that's all you've got. Use napkins or tissues or sleeves or as the absolute last choice, the back of your hand if you must touch your face. Just never touch mucous membranes with bare fingers.

Do those two things, then put your wallet back in your pocket at the vitamins and supplements store, and enjoy your freedom from upper respiratory tract infections.

Vitamin D plays an important role in the immune system, and there is some evidence that higher vitamin D levels help people to prevent upper respiratory tract infections, see here:

The basic mechanisms that are known can be summarized as follows: 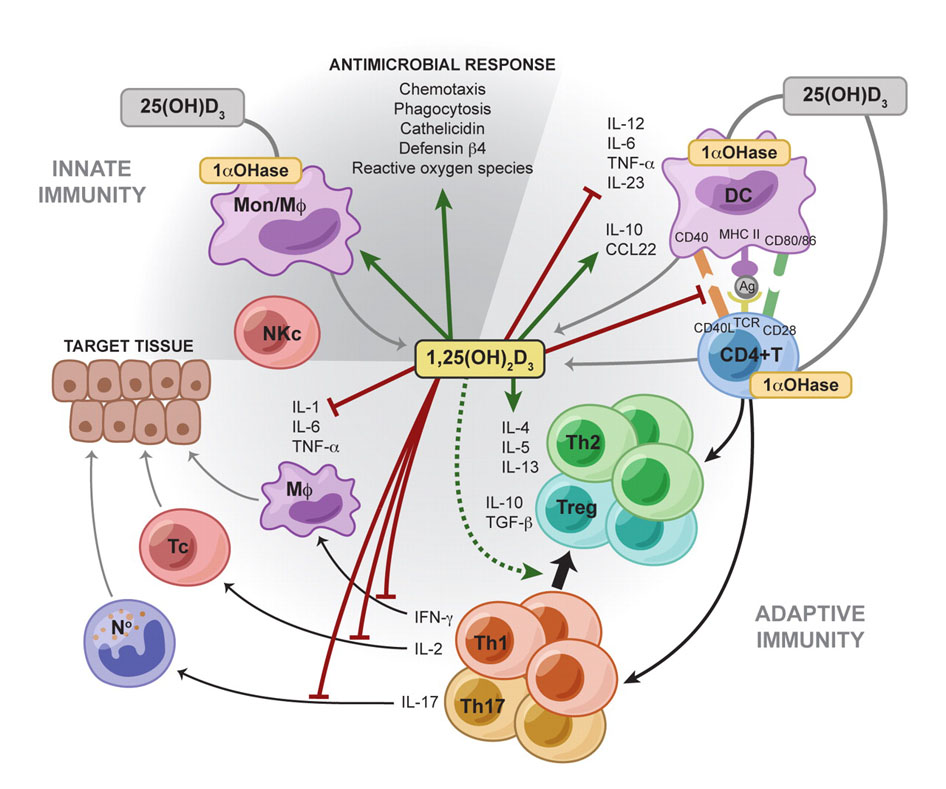 The immunomodulatory effects of 1,25(OH)2D3. 1,25(OH)2D3 targets different players of the innate and adaptive immune compartment. 1,25(OH)2D3 stimulates innate immune responses by enhancing the chemotactic and phagocytotic responses of macrophages as well as the production of antimicrobial proteins such as cathelicidin. On the other hand, 1,25(OH)2D3 also modulates adaptive immunity. At the level of the APC (like the DC), 1,25(OH)2D3 inhibits the surface expression of MHC-II-complexed antigen and of co-stimulatory molecules, in addition to production of the cytokines IL-12 and IL-23, thereby indirectly shifting the polarization of T cells from a Th1 and Th17 phenotype towards a Th2 phenotype. In addition, 1,25(OH)2D3 directly affects T cell responses, by inhibiting the production of Th1 cytokines (IL-2 and IFN-γ) and Th17 cytokines (IL-17 and IL-21), and by stimulating Th2 cytokine production (IL-4). Moreover, 1,25(OH)2D3 favors Treg cell development via modulation of DCs and by directly targeting T cells. Finally, 1,25(OH)2D3 blocks plasma cell differentiation, IgG and IgM production and B cell proliferation.

In addition to this, vitamin D is needed to build muscle, heavy exercise will deplete vitamin D levels, potentially compromising your immune system:

Our findings support our hypothesis. Analysis of our results showed that vitamin D levels are associated with neuromuscular performance and aerobic capacity in professional soccer players. Notably, to the best of our knowledge, for the first time our study provides evidence of a linear relationship between vitamin D serum levels, not only with jumping performance, but also with VO2max and speed in non-supplemented soccer players. In addition, we have found that even the short off-season period of reduced training stress had a boosting effect on vitamin D levels. Interestingly, this increase in vitamin D levels was evident in parallel to a reduction in aerobic and neuromuscular performance parameters. The latter finding strengthens the well-documented concept that training plays the principal role for exercise adaptations and improvements in exercise performance, whereas all other parameters including vitamin D play a supportive role.

I make sure I get about 7000 IU of vitamin D per day, and I keep my calcidiol level at about 200 nmol/l. In the summer I adjust the intake of vitamin D supplements to take into account the amount I get from the Sun, in the winter I get the entire dose of 7000 IU/day from supplements (I then take 10,000 IU/day, 5 times per week). Note that such doses and calcidiol levels are safe.

I don't exercise in a gym, I only exercise outside. This helps to build immunity against cold viruses early on when they are still evolving to become next winter's scourge. When you run, your lungs filter the air less, allowing viruses to enter your body more easily. Also, you are inhaling an enormous amount of air up to ten times more per unit time compared to being in rest. Chances are then that your immune system will already have encounter the cold viruses that will later mutate a bit and then make many people ill.

Not the answer you're looking for? Browse other questions tagged treatment disease or ask your own question.

33
If human life is so long largely due to modern medicine, does every illness shorten lifespan?
3
What is a terminal or chronic illness? What is the difference between the two?