Where does Ibuprofen inhibit COX-1, and what is its MoA?

Both ASA and Ibuprofen are COX-1 inhibitors. However, ASA inhibits the formation of the enzyme Thromboxan A2 through inhibition of COX-1 at SER 529, which is responsible for thrombocytes. That in turn results in the coagulation inhibition of ASA. Basically, it disturbs the following process:

Ibuprofen does not have anticoagulant properties. Where does Ibuprofen inhibit COX-1, and what is Ibuprofen‘s Mode of Action?

I'm not clear why you're asking this as this information is readily available unless I missed something in your question.

As for anticoagulant activity, my recollection is that if anything Ibuprofen is one of the worse NSAIDs in terms of cardiovascular side effects being prothrombotic, though not as bad as Diclofenac. 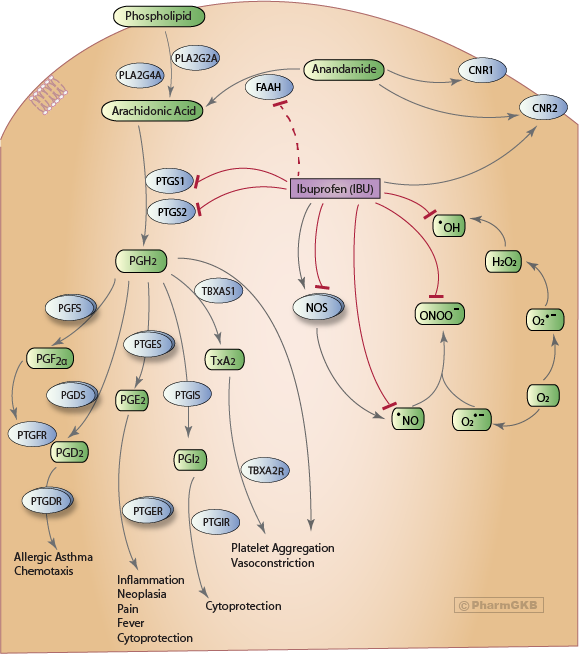 The main mechanism of action of ibuprofen is the non-selective, reversible inhibition of the cyclooxygenase enzymes COX-1 and COX-2 (coded for by PTGS1 and PTGS2, respectively).

Ibuprofen exerts its anti-inflammatory and analgesic effects through inhibition of both COX isoforms. In addition, ibuprofen scavenges HO . radical, . NO and ONOO - and can potentiate or inhibit nitric oxide formation through its effects on nitric oxide synthase (NOS) isoforms. Ibuprofen may activate anti-nociceptive axis through binding to the cannabinoid receptors and through inhibition of fatty acid amide hydrolase (FAAH) that metabolizes endocannabinoid anandamide.

The supplementary question is, why is that NSAIDs also don't have anti-coagulant effect?. And the answer is that they do but it is short lived and reversible as the drug concentration falls, where aspirin's effect is irreversible.

All conventional, non-COX selective NSAIDs, also block platelets by inhibiting thromboxane synthesis but in contrast to aspirin, this effect is reversible. This is why an NSAID is not a satisfactory substitute for low-dose aspirin as a prophylactic therapy for cardiovascular events. As the blood concentration of the NSAID declines, the effect on the platelets also declines and is lost. This loss of platelet inhibitory effect is more pronounced for NSAIDs with shorter half-lives in the body such as ibuprofen, where for significant parts of the 24 hour day, platelets will not be inhibited. This problem is compounded if compliance with the NSAID is not perfect.

There is one other important complication. This effect of aspirin is blocked by concomitant therapy with all non-selective, conventional NSAIDs, except for diclofenac. (2) Also, we now know that the non-selective, conventional NSAIDs also increase the risk of cardiovascular events occurring. Diclofenac happens to be the most risky of the non-selective NSAIDs, and approximately equivalent to available COX-II selective NSAIDs such as celecoxib. (3)

Not the answer you're looking for? Browse other questions tagged medications drug-metabolism mechanism-of-action or ask your own question.

19
What effect does long-term caffeine use have on memory?
2
What is difference between loprox and antifungal cream?
4
What are ibuprofen alternatives without the side effects
3
What can you infer from an unknown drug from its name
2
Caffeine clearance range/distribution and what determines it
2
What does JP mean after a medicine/compund name?
1
what is the advantages (for patients) in delayed and extended release drugs?
1
Can oseltamivir shorten the duration of COVID-19 and inhibit replication and transmission of the SARS-CoV-2 (2019-nCoV) virus?
1
What does primary, secondary and safety outcome of a drug study mean?