Are prions only misfolded, or mutated as well?

I understand that a prion is a misfolded protein.

I had a discussion with someone who said that the addition of certain atoms to a protein could cause it to become misfolded. I don't doubt that that is true.

My understanding, however, was that a protein with other atoms added to it would be not be called a prion, even if it was folded differently. That is, my understanding was that the term "prion" is used for a protein that is different from a normal protein only by virtue of its folding.

Could someone here clarify which view of the term "prion" is correct?

It's a little unclear what you mean by "protein with other atoms added to it" -- are you referring to a prion protein that's become mutated by a genetic polymorphism, or a non-prion protein that has been become misfolded and whether this misfolding now makes it a prion?

Either way, I believe that the answer is the same. My understanding is as follows:

Prions can have a normal or abnormal conformation

A prion is a 30­kD cytoplasmic protein of a specific type that's normally present in neurons. The term prion can either be used to refer to the normal protein, or one with the misfold. The nuances are as follows:

However, when people refer to prions, they usually mean the misfolded PrP^Sc conformation, which causes prion disease.

Mutations increase the likelihood of a conformational changes

There's a good section in Robbins and Cotran relating to how mutations in the prion can trigger spontaneous conformational changes:

The conformational change resulting in PrPsc may occur spontaneously at an extremely low rate (resulting in sporadic cases) or at a higher rate if various mutations are present in PrPc, such as occurs in familial forms of Creutzfeldt­Jakob disease (CJD) and in Gerstmann­ Sträussler­Scheinker syndrome (GSS) and fatal familial insomnia (FFI).

PrPsc, independent of the means by which it originates, then facilitates, in a cooperative fashion, the conversion of other PrPc molecules to PrPsc molecules. It is this propagation of PrPsc that accounts for the transmissible nature of prion diseases. This capacity for a protein in an abnormal conformation to induce similar structural change in other molecules as a self=­propagating process has recently been demonstrated for many of the aggregating proteins associated with traditional neurodegenerative diseases. 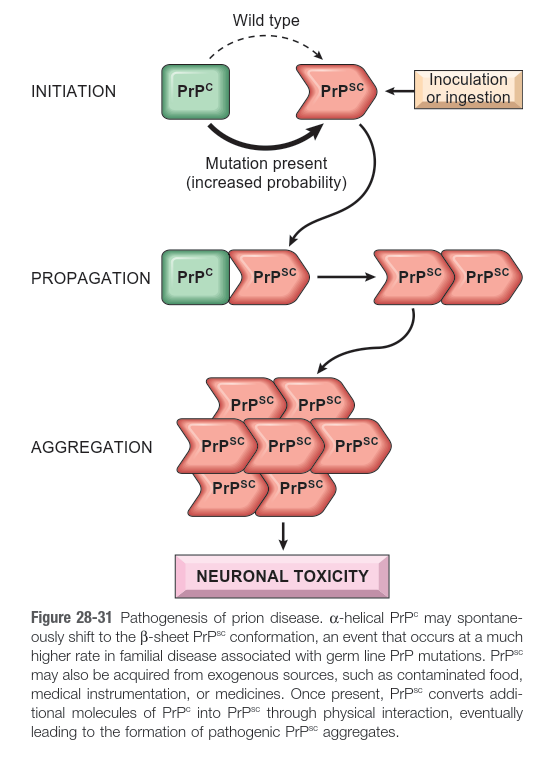 The gene encoding PrP, termed PRNP, shows a high degree of conservation across species. A variety of muta­tions in PRNP have been found to underlie familial forms of prion diseases. In addition, a polymorphism at codon 129 that encodes either methionine (Met) or valine (Val) influences development of the disease: individuals who are homozygous for either Met or Val are overrepresented among cases of CJD compared with the general popula­tion, implying that heterozygosity at codon 129 is protec­tive against development of the disease. The same protective effect of heterozygosity at codon 129 is observed for iatrogenic CJD (mostly cases that followed exposure to naturally derived pituitary hormone replacement).

So to be clear, any mutations that are relevant to the matter of prions are those that make a prion in a normal conformation switch to an abnormal one.

So in answer to the question...

Prion protein refers to a specific type of protein that can exist in a normal or abnormal conformation. If a random protein had atoms added to it and it became misfolded, it wouldn't become a prion.

However, polymorphisms and mutations in the prion protein can make it more susceptible to switching. So if the addition of atoms that you speak of happened to a prion and this resulted in such a switch, it would instantiate prion disease.

That is, my understanding was that the term "prion" is used for a protein that is different from a normal protein only by virtue of its folding.

What you're referring to can more accurately be parsed as follows:

The term prion disease is used to refer to a a abnormal prion that is different from a normal prion by virtue of its folding.

Not the answer you're looking for? Browse other questions tagged proteins or ask your own question.

4
What are the most likely essential amino acids to be deficient in a vegan diet?
9
Are there any health hazards related to raw veganism?
5
Could the COVID-19 vaccine adversely impact healthy protein reception?