Is this internet meme about the price of insulin true? [closed]

Want to improve this question? Add details and clarify the problem by editing this post.

The internet meme below has been circulating on Facebook recently. Is the content of it true? Where I am (not in the US) insulin is a quite cheap medicin. 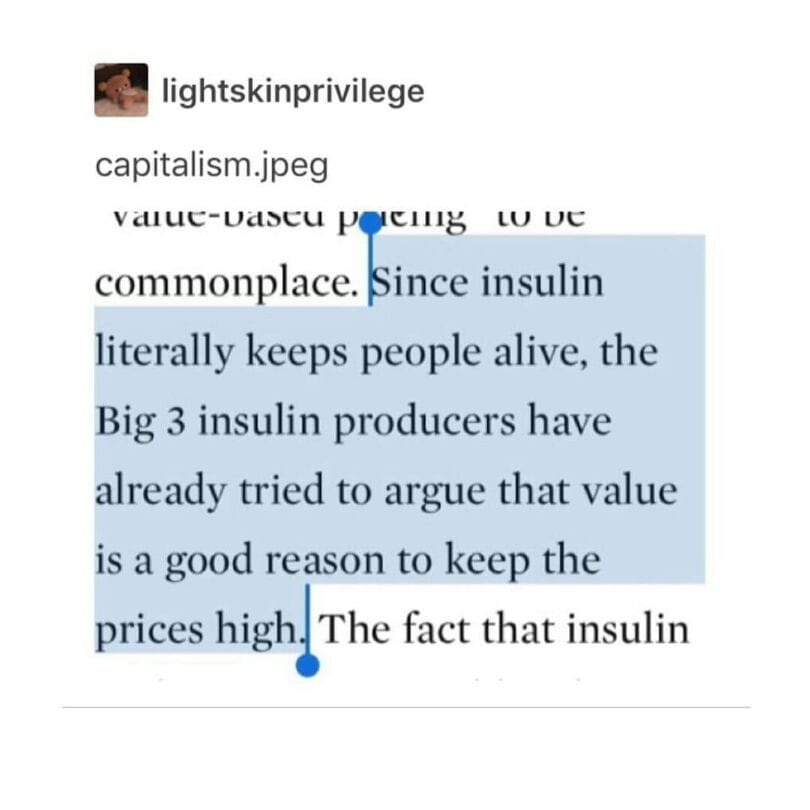 The insulin price has grown significantly over the years, mostly from 2000-ish to 2014 for almost every major producer.
The percentage of people that have to pay (and/or copay) more than 1000$ has for the first time since 1999 the 50% mark, and for a lifesaver medicine like insulin, this is a major problem that affects the 1.5 million people living in the US with type 1 diabetes. (plus the type 2 diabetic people) There are several factors that impact the cost structure of this industry and vary from the drug makers itself to an indefinite number of intermediaries (pharmacy benefit managers, companies) and the R&D for developing new types of insulin, like the Fiasp.
On the other hand, there are countries like Italy (where I live) where you (mostly) don't have to pay for insulin.

Response to Marzipanherz: Yes, here in Italy the price of insulin have been less affected by the rise compared to the US. A package of 5 vials of Novorapid, cost just a little bit over 50€ to the Italian Sanitary System, and years ago was just under that price. The situation is a little bit more complicated, due to the fact each region can, in a broad way, publish public notices allowing each drug-maker to make an offer in order to enhance the competition between them and getting the lower price for the market.
Of course, if a patient has a need of getting a specific type of insulin, he will get it but the general rule is to administer the insulin brand that won the public notice. There is a quite relevant paper (written entirely in Italian) where it states that the average expenditure for a type 1 Diabetic person in Italy is about 4777€ of which 1399€ are on medicine and materials. In the US the direct costs (paid directly or indirectly) for the Diabetic person is about 7888$. Those data should be interpreted with more context but they give a general idea of the differences between the 2 countries.

Not the answer you're looking for? Browse other questions tagged insulin or ask your own question.

3
Use of injection containing both insulin and glucose
5
How long on average would a type 1 diabetic survive without insulin injections, given that their remission phase has long since passed?