Why are certain drugs prescribed more often to either males or females?

I have some original data on prescription frequencies of certain common drugs and I have calculated the gender ratio of patients for each. The list below contains Top 15 of the most commonly prescribed drugs in a major Western country. 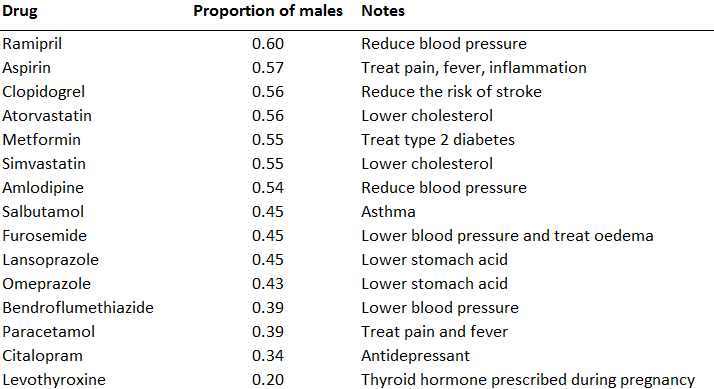 I am more of a data analyst than a medic, so the reasons for this are not obvious to me. I have used Google/Wikipedia to find the main reason for the prescription of each drug, but my list is by no means exhaustive and I understand it some cases it can be quite nuanced. Could someone with a medical background shed some more light?

My broad generalisations are that men appear to be more often prescribed blood pressure and cholesterol lowering drugs (with a couple of exceptions).

An asthma treatment and an antidepressant are more often prescribed to women. And obviously a thyroid hormone supplement, which is used during pregnancy, is also prescribed much more to women.

Of the two commonest over-the-counter drugs, why is aspirin is prescribed more often to men and paracetamol to women?

Browse other questions tagged medications gender-specific or ask your own question.

11
Are OTC pain medications safer than prescriptions?
7
Why do different pain killers have different effects on people?
6
Why is medicine used to treat symptoms which are our body's way of telling us something is wrong?
5
Why do female smokers often have creases above their lips?
1
Why is Tradozone prescribed to aid with insomnia?
2
Why is it that psychoactive drugs tend to be dangerous?