How much does aspirin affect blood clotting?

How long does it take for the clotting effects to wear off. Assuming one dose of around 600mg of aspirin and exactly how much effect does it have on clotting of minor bleeds?

According to Tulane's pharmwiki, the half-life of aspirin for a dose of 300-650 mg is 3.1-3.2 hours. The half life of a drug is the amount of time needed for the concentration of drug to be reduced in half (after reaching peak concentration).

*I only use 5 half-lives because it was a rule of thumb for drug elimintion mentioned in the Youtube video in my references. A more conservative answer could be 6 half-lives (1.5625% drug remaining in blood) or rougly 19 hours. 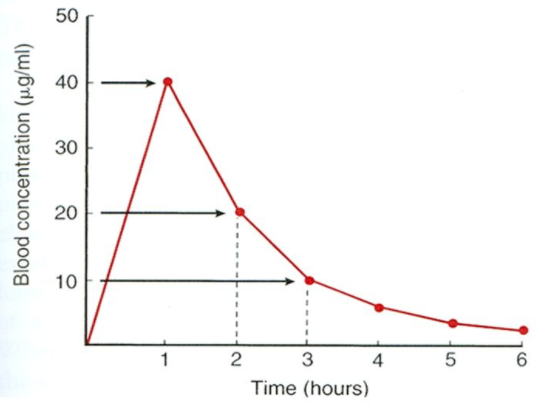 Aspirin functions as a blood thinner by irreversibly inactivating a protein called the COX enzyme in platelets, which disrupts the clotting process. This is why a possible serious side effect of taking aspirin is bleeding a lot from a minor cut.

In summary, in those 16 hours in which the aspirin is in action, the platelets (life span: 8-9 days) that are affected will be unable to clump together to clot which can pose a risk for minor bleeds.

Not the answer you're looking for? Browse other questions tagged medications bleeding or ask your own question.

5
How offput should one be when drug interaction checkers say "X will decrease/increase the level or effect of Y by altering drug metabolism"?
8
Why do different pain killers have different effects on people?
2
Accidentally took cold medicine an hour early
0
Is it possible that paracetamol + ibuprofene is much better for fever than ibuprofene alone? If yes, how?
4
How to decide which painkiller to take?
2
Effects of Modafinil
1
Mistakenly took Atarax
3
At what daily dose does daily aspirin use become dangerous for a long-term user?
6
Is Moderated Caffeine Good? (if so how much and how often)