Are there tables that compare deadly effects of various psychoactive drugs?

Many people say that most illegal drugs are dangerous.

Others say that meth is more dangerous than heroin and cocaine and alcohol and nicotine is about as dangerous as those.

And others say that heroin and cocaine are the most dangerous and the rest aren't as dangerous. For example, some people write how safe ecstasy (XTC), ganja (i.e. cannabis), kratom, LSD, and DMT are.

Are there some tables for that somewhere?

I saw some graphs like that. But it's very unclear.

These tables you wish for are not quite exactly in the format you would seem to like them and as far as I know not available for a "global every substance we know" analysis. It is also quite difficult to compare all of them in one metric alone since these drugs are sometimes quite incomparable.

Most of the following tables and graphics are attempting to aggregate and integrate many aspects of "harm" involving a drug can cause. "Involving" a drug here includes any harm resulting from societal or legal troubles and other consequences. That is largely due to the legal or illegal status of a drug. In the case of clean cannabis (i.e. unadulterated, uncontaminated etc.) the direct physical harm from the drug itself, while not completely without possible dangers, is close to zero for the very vast majority of adult people without pre-existing conditions that would increase their vulnerability.

Since this data is based on the official statistics from countries waging the war on drugs, sometimes these statistics are a bit skewed. For example, if an autopsy reveals any casualty had consumed cannabis this is recorded as cannabis being involved in the death (and then sometimes sloppily even reported as "causing") even if the drug itself cannot and did not cause the death. These cases are for example resulting from accidents in traffic even if it entirely the fault of an entirely sober driver.

When interpreting the data, these intentional skewing by the authorities has to be taken into account.

But some very thorough studies on general harm were done, like these one for the UK:

Drug harms in the UK: a multicriteria decision analysis (The Lancet Volume 376, No. 9752, p1558–1565, 6 November 2010) These findings lend support to previous work assessing drug harms, and show how the improved scoring and weighting approach of MCDA increases the differentiation between the most and least harmful drugs. However, the findings correlate poorly with present UK drug classification, which is not based simply on considerations of harm.

These findings are somewhat better described and more accessible in

Drugs that cause most harm Scoring drugs (Economist Nov 2nd 2010, The Economist online) 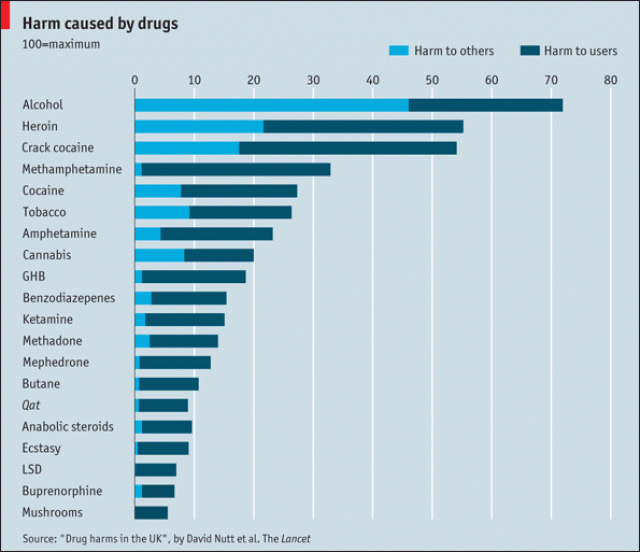 The prohibition policy that is associated with the War on Drugs is not in any way based on reality, rationality, common sense or risk/benefit analysis but ideology based on moral panics and a crime against humanity in itself. Still that list is not to be read that the above table is giving any substance a free pass on the basis that if it is deemed less dangerous than alcohol and alcohol is legal∞ so…
These numbers are composite aggregates and as such have a weakness of too much information reduction necessary to convince uneducated voters and politicians to readjust their decision making on perhaps some basis of rationality and a more balanced view of the available evidence.

Getting this into an again more complicated to read table, with numbers and legal status again for the UK:

Again, this is not a guideline for anything but an attempt to rationalise. Solvents are one of the stupidest ways imaginable to get intoxicated, rather than inebriated, causing quite a lot of individual damage in a very short amount of time. But since they cause comparatively few deaths and not much crime, they get a good spot on the list.
Cannabis is listed as causing 19 deaths. Which is again difficult to put into perspective, as the substance may have been "involved" in the deaths recorded in that statistic, but certainly did not directly cause any death in itself from an overdose. Chewing just Khat is also listed above. While the leaves have to be chewed for a long time to produce any effect at all, and no deaths are recorded from the leves, the purified substance can be quite nasty and if this chemical is then again adulterated or mixed the results are anyones guess again.

These findings are found refined visually in Drug harmfulness: 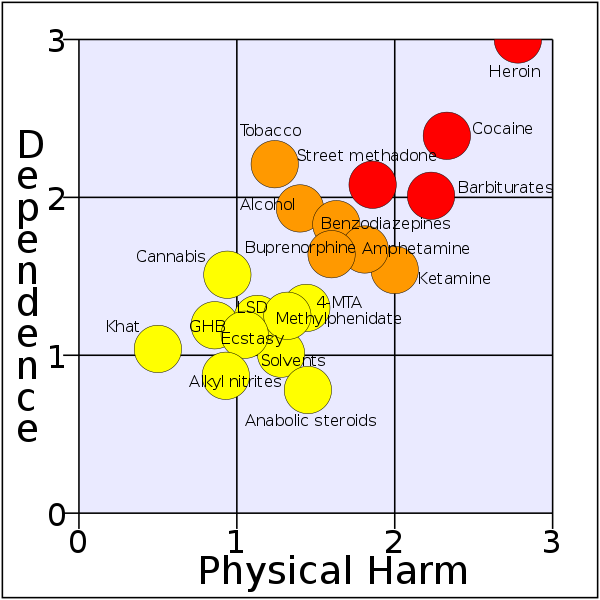 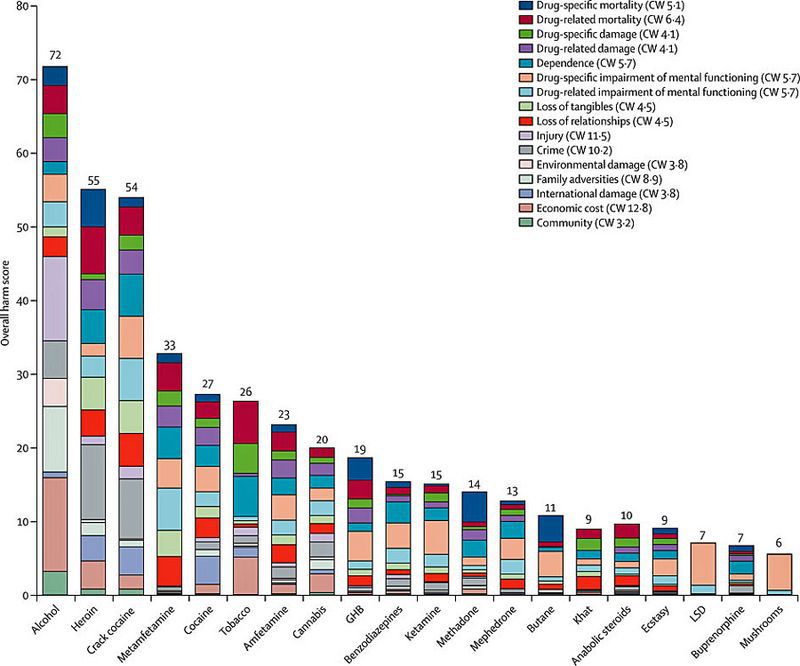 Bringing all these substances into one comparison has its advantages – but it is very difficult comparison in a very complicated matter. One thing to keep in mind besides the overall harm a substance might cause is the directly deadly effect any one given substance might cause. This is a problem for many drugs, as the quality classic illegal drugs from the 1960s like Cannabis and LSD, simply are just not deadly at all, despite causing the moral panic that deludes the public mind until today. Using organically grown coca-leaves as a tea or chew will not kill anyone, using the isolated active substance cocaine migt very well cause a fatal overdose. This is amplified danger if a first purified substance is then again diluted with an unknowable mixture of substances to sell it illegally "on the street".

The greatest harm and the most deaths from any of these substances can be read as caused primarily by the societal and political attitudes and laws around them, not by any pure substance as such.

If – still – only the concrete death rate related to the most troubling substances, and the statistic reduced to the substances alone, recorded in nation-wide statistics are the primary concern, then for the US, the NIH gives the following figures: 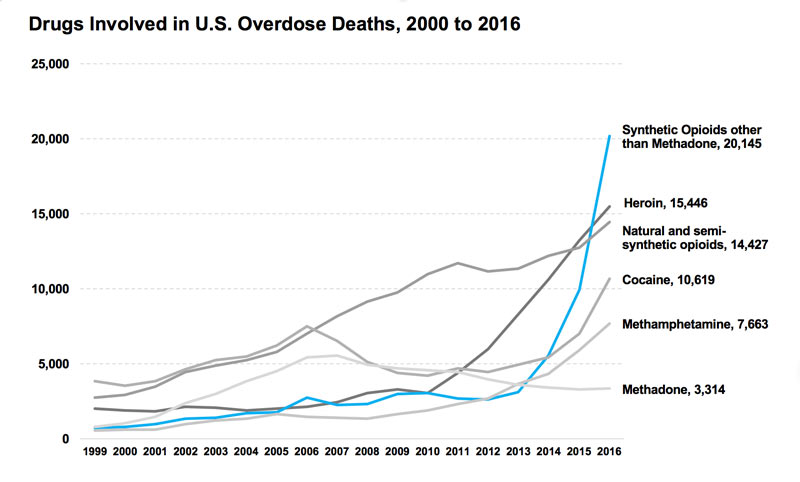 If illegal or psychotropic psychoactive drugs were consequently treated like prescription drugs in the terms describing their effects, then one thing becomes apparent: prescription drugs, like chemically concentrated or purified natural drugs tend to have a very narrow therapeutic window or therapeutic index.

Opium has a wider therapeutic window since it's a mixture of opioids that are both synergistically and antagonistically. Opium is also comparatively weak compared to morphine that has a smaller window since it is the most depressing and analgesic substance isolated from opium, heroin is then an artificial derivate with increased potency and purely synthetic opioids, like fentanyl, show so much receptor affinity and a that effect and overdose have to be again much more precisely calculated. Pharmacokinetics and route of administration differ as well.

How many deaths a drug causes also depends on the base rate of users of this drug. This ratio may be calculated with some confidence for users of tobacco and alcohol, but from illegal drugs this is a very convoluted story. Acute overdose poisoning from alcohol and even death is not uncommon, also even from acute withdrawal of that drug. All these effects are very rare from tobacco.

The numbers you are looking for would have to come from controlled lab experiments with pure substances and then extrapolated. Thanks to the current prohibition and uncontrolled market situation, this is largely an exercise in futility.

2
Why is it that psychoactive drugs tend to be dangerous?