Meaning of "shared familial confounding" in a study

From a news report:

P.S. I cross-posted the question on Stats SE.

If A and B occur together more than would be expected, most people assume that A causes B or B causes A. Confounding refers to the case where something else affects both of them, making them appear more directly related than they truly are.

For example, say I do a study and discover that most Olympic athletes come from wealthy families, at a rate far more than everyone else. I find a correlation between wealth and Olympic success. Some people might say "that makes sense, they get put into expensive sports when they're young, their families can buy equipment and pay coaches, and they can concentrate on their sport instead of having to work at a job in their teens and twenties." But someone else might point out that tall people are generally richer than short people -- more successful, get more promotions, etc, and for most sports, taller people do better. Or is it that rich people, who eat better and have less stress, grow up taller than poor people? Anyway, maybe their tallness is causing their sports excellence and is correlated with their wealth. Height becomes a confounding factor. Does it explain all the wealth/Olympic correlation? Or most of it? Or just a little bit of it?

You can try to separate the confounding in the athlete study by looking at sports in which being taller isn't an advantage, or sports that don't require years of expensive training, equipment, memberships, vacation trips to ski resorts etc. You can also look at adopted children, who don't share genes with their parents, to try to reduce some of the "tall child from a tall parent" aspect. It's hard.

In your study, you can imagine the question is "does getting a lot of childhood infections mean you're more likely to be psychotic?" and they I suppose I have to deal with "does being psychotic mean your children, who inherit your tendency to psychosis in their genes or by the way you raise them, are more likely to get a lot of infections?" as well as "is there something that runs in families that might make you psychotic and more likely to get a lot of childhood infections?" - either by having a weak immune system or by being exposed to some other agent or by being raised a certain way or having certain genes. Those are shared familial confounding,

That is: you see a correlation between two variables and try to understand the causality that might connect the two variables you look at. If there is a causal factor, but an indirect/external one concerning your two variables of interest then you only have confirmed the correlation, but are not much the wiser for the probable causal link connecting them. This is very often a problem if we like to hunt for monocausal explanations and in reality there are more factors than one influencing the outcome of any observation.

If variables A and B are correlated, that's interesting. If A causes B it's fantastic to know. But If C causes A and B, and you do not know about C, it's still a dark box. You want to get to know C and how much iz is causing anything on A and/or B. Sometimes it is not easy to manipulate C, then you must at least identify C and better yet try to control C.

The study mentioned in the news report is:

Association of Childhood Infection With IQ and Adult Nonaffective Psychosis in Swedish Men. A Population-Based Longitudinal Cohort and Co-relative Study

This is perhaps easier to understand if already explained in a headline:

Familial (shared environmental and genetic) factors and the foetal origins of cardiovascular diseases and type 2 diabetes: a review of the literature

In that article you have the following visual explanation: 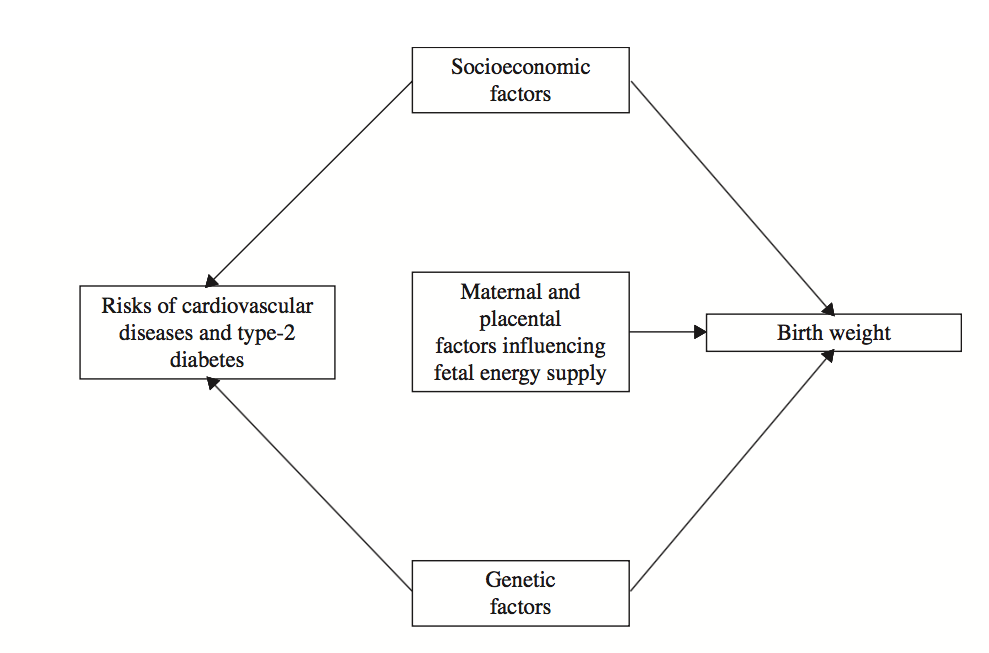 Familial (socio-economic and genetic) confounding of the association between birth weight and risk of cardiovascular diseases and type 2 diabetes.

So, in your case, the study tries to determine whether childhood infections are the most important causal factor for explaining the observed correlation for adult psychotic disorders, or whether there are shared influences that might attribute their bit to an explanation. Among those familial variables in this study were:

Winter birth (December to May), migration status (either parent born outside Sweden), parental history of NAP (from NPR), household crowding (ie, when the number of livable rooms minus 1 is greater than the number of people living in the house), and parental highest socioeconomic status when the participant was aged 8 to 12 years were included as potential confounders.

That made them feel confident enough to reach the following conclusion:

Not the answer you're looking for? Browse other questions tagged terminology clinical-study or ask your own question.