How low can you go on a low salt diet?

I'm sensitive to salt and am considering doing a salt-free diet. Is it ok if I remove salt and seasonings from my diet and cooking altogether? Will the sodium content of natural foods like oats, milk, fruits and chicken be enough to sustain long-term health?

Assuming you are healthy, you will likely naturally regulate your sodium intake to appropriate levels. (Sodium is highly regulated by the renin-angiotensin-aldosterone system.) Too low and too high are both possible, and I would not attempt to manipulate sodium intake without without measuring or calculating current intake first.

If you are thirsty, you are either not getting enough water or eating too much salt. If you are craving salty foods, you're either drinking too much or not eating enough salt. Excessively high or low salt intake over long periods of time alters RAAS activity (otherwise serum sodium levels would be affected), so changes should be made gradually. Before making significant changes to your diet, you should consult your physician.

Decreasing salt intake had been recommended to decrease blood pressure. In "Why Should I Limit Sodium?" (pdf), The American Heart Association states:

However, note that blood pressure is a proxy indicator with many causes that may have nothing to do with your overall health or how long you live. It is also possible for blood pressure to be too low (shock). No blood pressure = No life.

Many studies have not collected data on extremely low-levels of sodium intake, so no conclusion can be drawn from those studies about the safety of low sodium intake. More recently, data has been collected showing that very low levels are associated with increased mortality. These outcomes are reasonable because Na/K-ATPase requires sodium to function. Some well known poisons (digitalis, ouabain) work by disabling the sodium-potassium pump. No salt = No life.

Here is a graph from BMJ: Joint association of urinary sodium and potassium excretion with cardiovascular events and mortality: prospective cohort study. 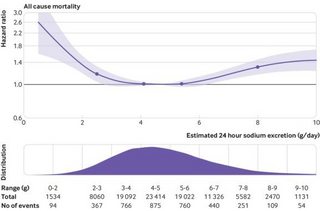 And a similar graph from NEJM: Urinary Sodium and Potassium Excretion, Mortality, and Cardiovascular Events.

SODIUM REQUIREMENTS DEPEND ON THE SWEATING RATE

Adequate intake for sodium for moderately active adults can range from 460 to 1,500 mg/day, depending on whom you ask (Nutrition Australia, USDA). You can meet these intakes without adding salt to foods, especially if you eat foods that are already salted, for example, 100 g of bread can contain more than 500 mg of sodium. Foods that are not pre-salted, usually contain less than 100 mg of sodium per serving.

the sodium AI [adequate intake] has been set at 1.5 g/day. Sodium intake at this level would be adequate to cover losses from sweating among those who are moderately active.

...the AI of 1.5 g/day does not apply to individuals who lose large volumes of sodium in sweat, such as competitive athletes and workers exposed to extreme heat stress....sweat losses during exercise in the heat may easily exceed 1 L/hour with a sodium concentration of greater than 0.8 to 1.15 g/L.

When sweating a lot, you may need more than 5 grams of sodium per day. Sweat rate and sodium loss during work in the heat (PubMed, 2008):

People working in moderately hot conditions for 10 hours on average will lose between 4.8 and 6 g of sodium (Na) equivalent to 12–15 g of salt (NaCl) depending on acclimatisation.

The American Heart Association recommends no more than 2,300 mg of sodium a day and moving toward an ideal limit of no more than 1,500 mg per day for most adults.

EVIDENCE THAT LOW-SODIUM DIET MAY BE HARMFUL

It is good to be aware that not only high-sodium, but also low-sodium diet may be harmful for the heart.

Associations of urinary sodium excretion with cardiovascular events in individuals with and without hypertension: a pooled analysis of data from four studies (Lancet, 2016):

One recent study has found a similar relationship between salt intake and chronic kidney disease.

In this population study salt intake is not associated with development of chronic kidney disease (CKD) in individuals with normal blood pressure, whereas in hypertensive individuals both low and high salt intakes are associated with increased incidence of CKD, similar to U-shaped associations between salt intake and mortality found in previous studies. The results contribute to the skepticism, which has questioned the present public health policy to reduce salt intake below 5.8 g.

Not the answer you're looking for? Browse other questions tagged nutrition diet allergy salt sodium or ask your own question.

3
restoring a live tooth
1
Salt and bad sleep
1
Calorie content of foods
5
Does eating too much cocoa have harmful side effects?
0
Difference between Salt Tablets and Table Salt
0
How is table salt different from Neti-Pot salt?