What is the dispersion of woman's ovulation day around the mean value which is 14th day?

Everywhere there's information that ovulation happens at around 14th day of the cycle. But what is the mathematical meaning for the word around?

Current clinical guidelines about a woman's potentially fertile days have been based on two assumptions—that ovulation occurs 14 days before the next menses and that women are fertile for several days before and after ovulation. It follows that in the usual menstrual cycle lasting 28 days, the fertile days would fall between days 10 and 17.15 The assumptions are, however, outdated. Firstly, only a small percentage of women ovulate exactly 14 days before the onset of menses. This is true even for women whose cycles are usually 28 days long. Among the 69 cycles for 28 days in our study, ovulation occurred 14 days before the next menses in only 10%. Time from ovulation to next menses ranged from 7 to 19 days (days 10 to 22 of the menstrual cycle). Thus, the fertile window can occur much earlier or later in the cycle than clinical guidelines suggest. On average, at least 10% of women with regular cycles were in their fertile window on any given day of their cycle between days 6 and 21. The timing of the fertile window is even less predictable for women with less regular cycles, which includes adolescents and women in their perimenopause.

This website by Dr. med. Elisabeth Raith-Paula provides the following graphic, which seems to be inline with the above cited study. 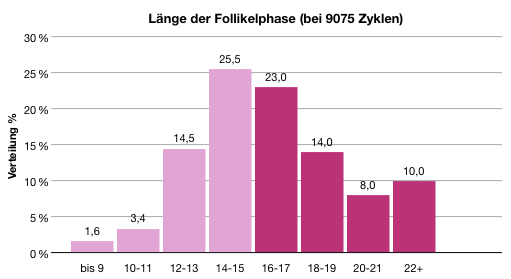 Not the answer you're looking for? Browse other questions tagged obstetrics reproduction female ovulation or ask your own question.

3
What's the real miscarriage risk from amniocentesis?
5
Why does the package leaflet of Ferrograd C advise not to use in the first 13 weeks of Pregenancy
0
Can a woman tell which ovary, during ovulation, released the egg? Can she feel pain (due to follicle rupture) particular to one side?
2
What is the fetal viability of a full-term birth baby?
0
Does using 2 vials of sperm per Intrauterine Insemination (IUI) attempt increase the chance of pregnancy?