We have questions on how to prevent or on how to reverse diabetes type 2. There are also some minor details about isolated potential causes.

No question to the overall causal explanation.

Our friendly neighbours at the wikipedia write about Diabetes mellitus type 2:

But looking at the section for causes there are just listings of contributing factors: lifestyle, genetics, and medical conditions.

Type 2 diabetes is the most common form of diabetes, affecting almost 18 million Americans. While most of these cases can be prevented, it remains for adults the leading cause of diabetes-related complications such as blindness, non-traumatic amputations, and chronic kidney failure requiring dialysis. Type 2 diabetes usually occurs in people over age 40 who are overweight, but can occur in people who are not overweight.

That leaves one wondering:

Is this wikipedia definition exhaustive? What is the main cause of diabetes type 2? Is this even the right way to phrase this question? Are their multiple main causes? If yes, how are they related to one another? 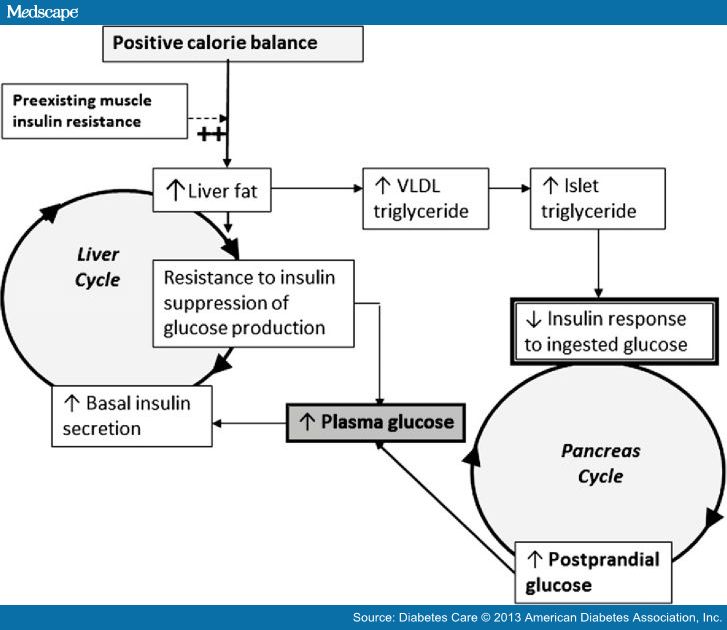 The twin cycle hypothesis of the etiology of type 2 diabetes. During long-term intake of more calories than are expended each day, any excess carbohydrate must undergo de novo lipogenesis, which particularly promotes fat accumulation in the liver. Because insulin stimulates de novo lipogenesis, individuals with a degree of insulin resistance (determined by family or lifestyle factors) will accumulate liver fat more readily than others because of higher plasma insulin levels. In turn, the increased liver fat will cause relative resistance to insulin suppression of hepatic glucose production. Over many years, a modest increase in fasting plasma glucose level will stimulate increased basal insulin secretion rates to maintain euglycemia. The consequent hyperinsulinemia will further increase the conversion of excess calories to liver fat. A cycle of hyperinsulinemia and blunted suppression of hepatic glucose production becomes established. Fatty liver leads to increased export of VLDL triacylglycerol,85 which will increase fat delivery to all tissues, including the islets. This process is further stimulated by elevated plasma glucose levels.85 Excess fatty acid availability in the pancreatic islet would be expected to impair the acute insulin secretion in response to ingested food, and at a certain level of fatty acid exposure, postprandial hyperglycemia will supervene. The hyperglycemia will further increase insulin secretion rates, with consequent enhancement of hepatic lipogenesis, spinning the liver cycle faster and driving the pancreas cycle. Eventually, the fatty acid and glucose inhibitory effects on the islets reach a trigger level that leads to a relatively sudden onset of clinical diabetes.

The observation that bariatric surgery often reversed T2DM was the genesis of this theory, and extreme low calorie diets have confirmed the reversal of T2DM simulating the period of starvation that occurs following bariatric surgery. Interestingly, even though insulin sensitivity is restored in the liver by calorie loss, it is still present in the peripheral muscles.

Another recent observation is that diets high in saturated fat predispose to peripheral insulin resistance.

So excess calories, particularly of saturated fat, would appear to be the cause of T2DM.

Type 2 diabetes is characterized by a combination of peripheral insulin resistance and inadequate insulin secretion by pancreatic beta cells. Insulin resistance, which has been attributed to elevated levels of free fatty acids and proinflammatory cytokines in plasma, leads to decreased glucose transport into muscle cells, elevated hepatic glucose production, and increased breakdown of fat.

A simplified scheme for the pathophysiology of abnormal glucose metabolism in type 2 diabetes mellitus is depicted in the image below: 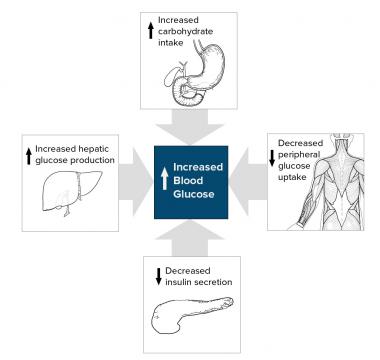 When a person (pancreas) is unable to produce requisite amount of insulin to maintain blood glucose levels or when their body is not able to utilize the manufactured insulin, that person is said to have affected by Type 2 diabetes.

Probable causes include but are not limited to: person's age, weight, genetics, lack of exercise, ethnicity and lifestyle.

Risk factors for the development of type 2 diabetes: There is evidence that certain ethnic groups have a predisposition to type 2 diabetes in the presence of the same risk factors. For example, among adult South Asians there are higher rates of obesity, central fat distribution, and resulting insulin resistance than in white populations. Nutritional factors (reduced intake of vitamin B12 and folate, because of prolonged cooking of vegetables) and lower levels of habitual physical activity also play their part in increasing the risk of diabetes in these population groups.

Not the answer you're looking for? Browse other questions tagged cause-and-effect type-2-diabetes or ask your own question.

32
Is there evidence that eating too much sugar can increase the risk of diabetes?
10
Is Type 2 Diabetes reversible?
5
Preventing diabetes mellitus
0
Is it possible that there are some people who cannot get Type 2 diabetes?

10
Is Type 2 Diabetes reversible?
5
Is there any cure for type 2 diabetes?
5
Type II Diabetes (T2D) Remission with Age?
6
Are all Type 2 diabetes effects caused by sugar levels?
1
How to interpret diabetic complications?
1
Why is there no ketoacidosis in Type 2 diabetes mellitus?
0
Is it possible that there are some people who cannot get Type 2 diabetes?
1
How to differentiate between Type 2 and Type 1 Diabetes