Why are two influenza vaccinations required for people under a certain age?

According to the CDC, people under 8 who have never had the flu vaccine or flu should get 2 doses at least 28 days apart. The reason given is that "the first dose 'primes' the immune system," but as far as I know "primes" is not a medical term in this context.

What exactly does "'primes' the immune system" mean here? And what is the interaction between the first and second doses that provides immunity?

It's just empirical data suggesting that the weaker immune system of young humans is typically not 'yet finished' reacting to the vaccine with building enough anti-bodys (and the restŌĆ”) after just one flu shot. Being "primed" might be perceived as a popularising phrase but it is not that far off either. One shot was observed to be not as effective in the past while two were apparently seen as similar effective as compared to shots for people older than children.

The relevant excerpt from the CDC for the upcoming season is really quite comprehensive and I cannot dump all the studies they considered in reaching this conclusion: From Prevention and Control of Seasonal Influenza with Vaccines Recommendations of the Advisory Committee on Immunization Practices ŌĆö United States, 2016ŌĆō17 Influenza Season:

Studies involving seasonal IIV among young children have demonstrated that 2 vaccine doses provide better protection than 1 dose during the first season a child is vaccinated. In a study during the 2004ŌĆō05 season of children aged 5ŌĆō8 years who received IIV3 for the first time, the proportion of children with protective antibody responses was significantly higher after 2 doses than after 1 dose of IIV3 for each antigen (p = 0.001 for influenza A[H1N1]; p = 0.01 for influenza A[H3N2]; and p = 0 0.001 for influenza B) (138).
Vaccine effectiveness is lower among children aged <5 years who have never received influenza vaccine previously or who received only 1 dose in their first year of vaccination than it is among children who received 2 doses in their first year of being vaccinated.
A retrospective study of billing and registry data among children aged 6ŌĆō21 months conducted during the 2003ŌĆō04 season found that although receipt of 2 doses of IIV3 was protective against office visits for ILI, receipt of 1 dose was not (139). Another retrospective cohort study of children aged 6 months through 8 years, the majority of whom received IIV3 (0.8% received LAIV3), also conducted during the 2003ŌĆō04 season, found no effectiveness against ILI among children who had received only 1 dose (140). In a case-control study of approximately 2,500 children aged 6ŌĆō59 months conducted during the 2003ŌĆō04 and 2004ŌĆō05 seasons, being fully vaccinated (having received the recommended number of doses) was associated with 57% effectiveness (95% CI = 28ŌĆō74) against LCI for the 2004ŌĆō05 season; a single dose was not significantly effective (too few children in the study population were fully vaccinated during the 2003ŌĆō04 season to draw conclusions) (141).
The results of these studies support the recommendation that all children aged 6 monthsŌĆō8 years who are being vaccinated for the first time should receive 2 doses separated by at least 4 weeks. [emphasis added]

This might be visualised like in "Efficacy of a single dose of live attenuated influenza vaccine in previously unvaccinated children: A post hoc analysis of three studies of children aged 2 to 6 years": 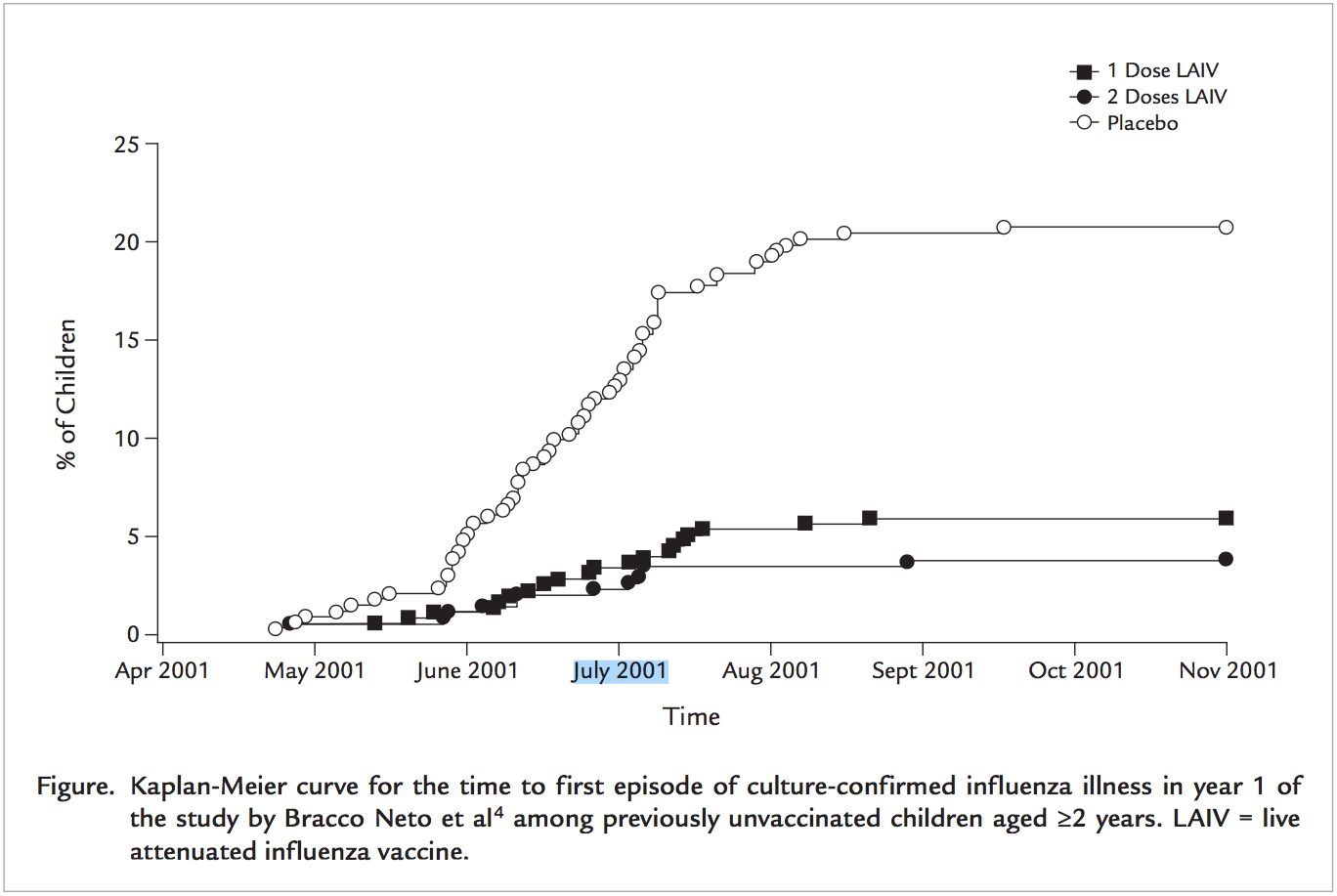 This indicates that children are strictly speaking not required to be vaccinated two times, since a single flu shot also provides some significant protection. But a second vaccination likely increases the potential benefit substantially. That's why a second round is recommended.

Influenza Vaccine Effectiveness for Fully and Partially Vaccinated Children 6 months to 8 Years Old during 2011ŌĆō2012 and 2012ŌĆō2013: The Importance of Two Priming Doses

In conclusion, during 2011ŌĆō12 and 2012ŌĆō13, vaccination with IIV3 reduced the risk of outpatient medical visits for ARI associated with influenza virus infection by about half. Vaccinations received in previous seasons had preventive value in subsequent seasons in the form of residual protection for those who missed vaccination in and priming which boosted the benefit of IIV. Most notably, children primed with 2 doses of influenza vaccine in the previous same season appeared to enjoy even greater preventive benefit from IIV3 and may have reduced their risk of A(H3N2) illness by two-thirds.

Immunization of previously unvaccinated children against influenza is thought to require two doses of vaccine. There is currently no general consensus regarding the age cut-off for a two-dose vaccination regimen. A second vaccine dose in previously unvaccinated children appears advisable because of the limited immunogenicity of a single dose of influenza vaccine in young children. [ŌĆ”] These recommendations are based on the premise that a significant proportion of these children are immunologically na ╠ł─▒veŌĆ”

Anyone who was exposed to the antigens of the viruses develops some residual immunity. This limited immunity further weakens over time since the viruses change so much and so rapidly. Thus people might require 'an update' to these antibody information for the immune system based on the 'currently trending' virus strains. Young children have a weaker adaptive immune response and presumably no residual immunity. Both points are thought to be addressed by the two vaccination regimes.

In 2015-16, The Advisory Committee on Immunization Practices issued a report on Prevention and Control of Influenza with Vaccines that recommended that all children (under nine years old) should get two doses of flu vaccine the first year that they are vaccinated against the flu. The second flu shot ŌĆö a booster dose, improves the effectiveness of the flu vaccine in children. According to the CDC,

Evidence is reviewed that suggests that B cells essentially recognize antigen patterns, whereas T cells react against antigens newly brought into lymphoid tissues.

Because the adaptive immune system can learn and remember specific pathogens, it can provide long-lasting defense and protection against recurrent infections.

3
Did I receive the BCG vaccine via stamper, not hypodermic?
4
Is the second vaccine dose necessary if seroconversion occurred after the first dose?
3
How can a vaccine prevent an individual from getting a disease but not from transmitting it?
3
Why did J&J go for one dose?