Is it dangerous to inhale agar-agar jelly

I want to make hookah aroma made from agar-agar dissolved in vegetable glycerin, aromas and high quality flavored vodka, but from what I heard, agar-agar expands within the stomach and is as well heat-resistant. I've seen jelly cubes used like that and concerning smoke production and flavor it was very good, but I don't know what gelling agent has been used. Agar-agar sounds like a very good choice as it is extracted from plants and burns on high temperature.

My question is this dangerous and if it is, how dangerous exactly it is?

Considering that agar melting temperature is approximately 85-95C / 176-185F and coals burns at around 200C / 392F at rest, providing temperature of at least 100C / 212F inside the bowl, agar will ultimately liquefy. You can eventually, still inhale it in its liquid form, just as soon as you have one of the vortex/phunnel bows (i.e the one that prevent leakages). 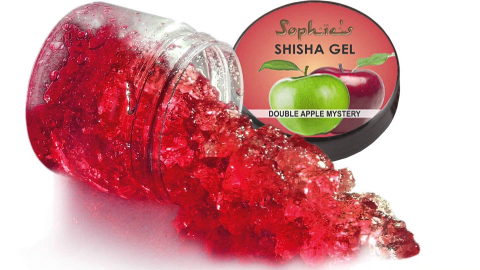 They obviously do resemble "jelly-alike cubes", but they are actually made of something very different - hydroponic gel (also this) (water crystals) which is often used as artificial weed and is not meant for human consumption. Whether it is healthy or not per se is debatable, I wouldn't use them. Also, there is a known shisha aroma manufactured by Changning Dekang Biotechnology Co,. Ltd that, according to its creators consists of "natural fruits", such as orange cores. It also looks like jelly. (see random review if you like)

Vaporizing alcohol as you suggest is a terrible idea unless you want to treat yourself from Pulmonary edema or you are a rat. It goes directly into the bloodstream making you instantly "drunk" for a shorter time. You can also very well get poisoned by inhaling too much of HQ flavored vodka. Inhaled alcohol can dry out nasal passages and make them more susceptible to infection not to mention that here is also a potential increased risk of addiction. Alcohol's bolining point would be very similar to agar's melting point - 78C which makes your idea interesting to some extent. (See full description of the process from NCBI. Actually as far as I see, the information provided there is not quite comprehensive as I was hoping) Note that water filtration like the one from the hookah itself is not optional. While it might not "filter" or "detoxicate" alcohol, it will cool the vapour, that could, otherwise damage your lungs and trachea severely. So use with caution.

Inhaling agar however, is unfortunately *not-very-healthy and it can cause lung polyps and even respirator collapse.

Agar is a thick gel. Agar might stick to some medications in the stomach and intestines, when taken by mouth - WebMD Interactions section

Coughing mechanism might not be sufficient for purging this kind of substance from your lungs. It of course, depends on how you smoke, but however you smoke there will always be a risk. I am not saying that you shouldn't take it, it is up to you, but I strongly advice you to be smart about that and not take advantage of it excessively.

Not the answer you're looking for? Browse other questions tagged smoking lungs smoke-inhalation or ask your own question.

7
How do I evaluate health benefits and health advertisements of products?

1
To what extend can passive smoking be dangerous?