Teeth brushing technique: what to avoid, and how is it better done?

By "better done" I mean more efficiently and without causing harm to gums, teeth, and other parts of the mouth. By what to avoid I'm referring to things that can harm, or not be effective.

There's a million different ways to brush the teeth, but some might irritate the gums, some can cause bleeding, and some might not be very effective. Assuming that the teeth and mouth are healthy in general: what should we avoid? How should we be doing it?

I'm not a dentist, and I would look forward to reading other answers (I believe this topic is misunderstood and there is a lack of guidance generally), but these are my top tips:

Your mouth becomes acidic after eating, and this can last for 60 minutes or so. So brushing immediately after eating is a bad idea, no matter what you've eaten, because the acidity will temporarily weaken the enamel.

I believe you can brush too hard, and I've heard that brushing should be more like a gentle tickle, without forcing the brush against your teeth, but I think this is hard to get across, as it is rather subjective. The very term 'brushing' also refers to activities that require physical effort and involve forcing things to move, eg brushing the floor or brushing your hair straight, so I'm not surprised if people over do it. Television has also been flooded with toothbrush adverts over the years, which normally contain an animation illustrating particles being 'brushed off' the tooth, and this gives the impression that some force is required. Also, use a toothbrush with soft bristles.

If you rinse your mouth immediately after brushing, most of the residual toothpaste will be washed out completely, but if you don't rinse then the active ingredients are given a bit longer to help clean your teeth.

Use a circular action

If you use a small circular action when you brush, then you'll increase the contact of the bristles with the gaps between your teeth, and the circular motion can help to ease out little bits. If you simply move the toothbrush over and along the teeth, there will be less contact with the gaps.

This is an excellent question and, sadly, it is one that doesn't seem to get much attention, even by dental professionals. But it should.

Disclaimer: The material given below is based on my own observations and study. It is not established dogma.

I'll give my personal answer to this question, but I think this focuses on the wrong aspect: toothbrush brushing. Perhaps the question you are driving at is: what's an effective dental practice that can be used to reduce cavities and periodontal disease?

I recommendation that you not try to do both things at the same time.

Think of these two things like painting a wall, or waxing a surface like your floor or car: you scrape the surface to remove the old debris, then you apply the paint or wax to a clean(er) surface so it lasts longer.

The same is true here: break up the microfilm and sweep away plaque (and tartar) as a separate step. This is done without toothpaste. After that, apply toothpaste to a clean surface as you would paint a surface.

Notice this is also the process that professional uses to clean your teeth. The step with toothpaste comes at the very end, and perhaps does not need to be done so frequently (as evidenced by the fact that it's not done every dental visit if there are several in succession.)

There are many ways to clean the surface. A wet or dry toothbrush is just one mechanism, but I think it clumsy since most toothbrushes cover more than one tooth, can't get easily at the back or in between of the teeth as other things do. As one alternative, there is Christmas tree-like brush called a proxabrush. There are also toothpicks, dental floss, and you can buy a scraper like the dentist uses (but not as fancy) has sometimes right next to stores that sell toothbrushes and other oral supplies. But if you do use a metal scraper, I'd go very gently; (Dental enamel is harder than steel but it is more brittle); also stay away from the gums. There is something commonly found, and that is less hard than enamel, and kind of obvious that can be used. I suspect many people may find it gross: your fingernail.

But here's a case for the fingernail. Consider this example of a mouth with advanced tartar: 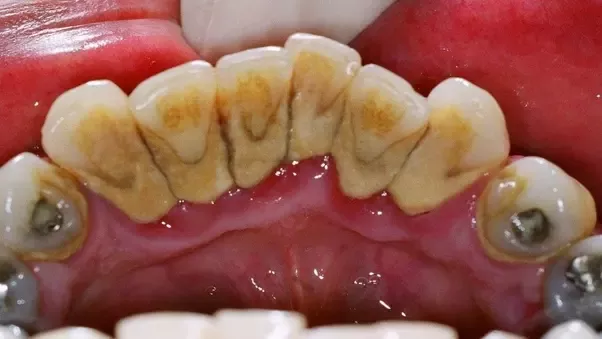 Between a toothbrush and your fingernail, which do you think would be able to do better at removing the tartar in affected areas? I'd submit that even compared to a toothpick, a fingernail can be better for certain areas. You can feel the flaring of the tooth and make sure to get in that area, for example. Concerned about germs? Disinfect your finger and fingernail.

Ok. So now that we've separated the cleaning and toothpaste part. Let's get to the toothpaste since that's what everyone seems to focus on. Again think of it like painting. Brush in one direction, at an angle with little force engaging just the tip. A toothbrush is after all just a brush like a broom or a paint brush. All of the ways you can damage a paintbrush quickly by using too much paint on it, smashing it perpendicularly into the surface and moving in random haphazard directions apply to a toothbrush as well. It is the same physical forces. In the painting community, a lot has been written about how to prolong the life of brushes and the proper way to use a brush. For example, this link shows what happens when you push with a brush rather pull with it. This article has pictures of worn out tooth brushes.

But rather than tell you how not to damage a toothbrush, the usual dental recommendation is to just throw the toothbrush out and buy another one (which you can also then damage quickly).

But here's another alternative that I don't think has gotten much attention: why not also use your finger? Here this is for spreading it around, not for abrasive use. After that you can swish the toothpaste around in your mouth to cover in between the teeth, then then spit the stuff out. You'll find that you do this faster and more efficiently, use less toothpaste while covering more surface area this way.

Okay having written all of the above, I'll just say that the toothbrush and toothpaste (especially in areas with fluoridated water) is as not important as cleaning the surface which is done more effectively by means other than via a toothbrush. This I largely haven't described. That's not to say that a toothbrush is useless, just not every effective given that there are other very simple alternatives.

But that's a topic for a different question, and one which I also think has not been covered very much.

If this verbiage isn't enough I've written about this also in https://rockyramblings.quora.com/Demystifying-Dental-Care .

Not the answer you're looking for? Browse other questions tagged dentistry hygiene or ask your own question.

11
Brushing teeth before or after breakfast
2
Treating gingivitis
3
Is dental floss really effective? According to studies, it is not
1
Possible to whiten teeth beyond natural color without veneers?
5
What procedures do dentists use for cleaning teeth, is there variation, and what is the rationale?
6
Does brushing your teeth immediately after sleeping have some medical significance?