What are known health effects of smoking e-cigarettes

E-Cigarettes have been recommended by a fair share of physicians as a substitute for cigarettes because they are supposedly healthier.

What is the scientific consensus on the health effects of e-cigarettes?

We do not know

That's a bit unsatisfying as an answer, but it's the truth. Vaping is around for somewhat 13 years (invented in 2003), but the international breakthrough was so recent that no long term studies have been conducted with meaningful results.

This is all there is to it. Feel free to read extracts from the studies below to get a broader understanding of how complicated and convoluted research in this area is.

Sources stating it's at least healthier than tobacco cigarettes

E-cigarettes currently vary widely in their contents and are sometimes inconsistent with labeling. Compared to tobacco cigarettes, available evidence suggests that e-cigarettes are often substantially lower in toxic content, cytotoxicity, associated adverse effects, and secondhand toxicity exposure. Data on the use of e-cigarettes for quitting smoking are suggestive but ultimately inconclusive.

Findings: Weighted averages of the scores provided a single, overall score for each product. Cigarettes (overall weighted score of 100) emerged as the most harmful product, with small cigars in second place (overall weighted score of 64). After a substantial gap to the third-place product, pipes (scoring 21), all remaining products scored 15 points or less.
Interpretation: Cigarettes are the nicotine product causing by far the most harm to users and others in the world today. Attempts to switch to non-combusted sources of nicotine should be encouraged as the harms from these products are much lower.

Cigarette smoking negatively influences otologic surgery results, mostly because of tobacco combustion byproducts. Counseling and, if needed, pharmacologic measures to reduce smoking are recommended. E-cigarettes that deliver nicotine in water vapor may be safer than tobacco smoking. Our review contributes to the discussion of how the trends of e-cigarette use and marijuana legalization will unfold in the future to affect our patients’ outcomes.

The literature search revealed 37 relevant articles. Findings suggest that e-cigarettes are mostly used by middle-aged current smokers, particularly males, to help them for quitting or for recreation. E-cigarettes contain very low levels of multiple toxic substances such as formaldehyde and acrolein, but these levels are many times lower than those found in cigarettes. They were found to have effectiveness in aiding smoking cessation to a limited degree. Debate continues regarding regulating their use for cessation versus heavy restrictions to control recreational use on the basis that it perpetuates nicotine addiction.

Clear evidence about the safety of e-cigarettes is lacking, and laboratory experiments and case reports suggest these products may be associated with potential adverse health consequences. The effectiveness of e-cigarettes for smoking cessation is modest and appears to be comparable to the nicotine patch combined with minimal behavioral support. Although a role for e-cigarettes in the treatment of tobacco dependence may emerge in the future, the potential risk of e-cigarettes outweighs their known benefit as a recommended tobacco treatment strategy by clinicians. Patients should be counseled on the known efficacy and potential risks of e-cigarettes. http://www.mayoclinicproceedings.org/article/S0025-6196(14)00989-6/abstract

The USPSTF concludes that the current evidence is insufficient to recommend electronic nicotine delivery systems for tobacco cessation in adults, including pregnant women. The USPSTF recommends that clinicians direct patients who smoke tobacco to other cessation interventions with established effectiveness and safety. http://annals.org/aim/article/2443060/behavioral-pharmacotherapy-interventions-tobacco-smoking-cessation-adults-including-pregnant-women 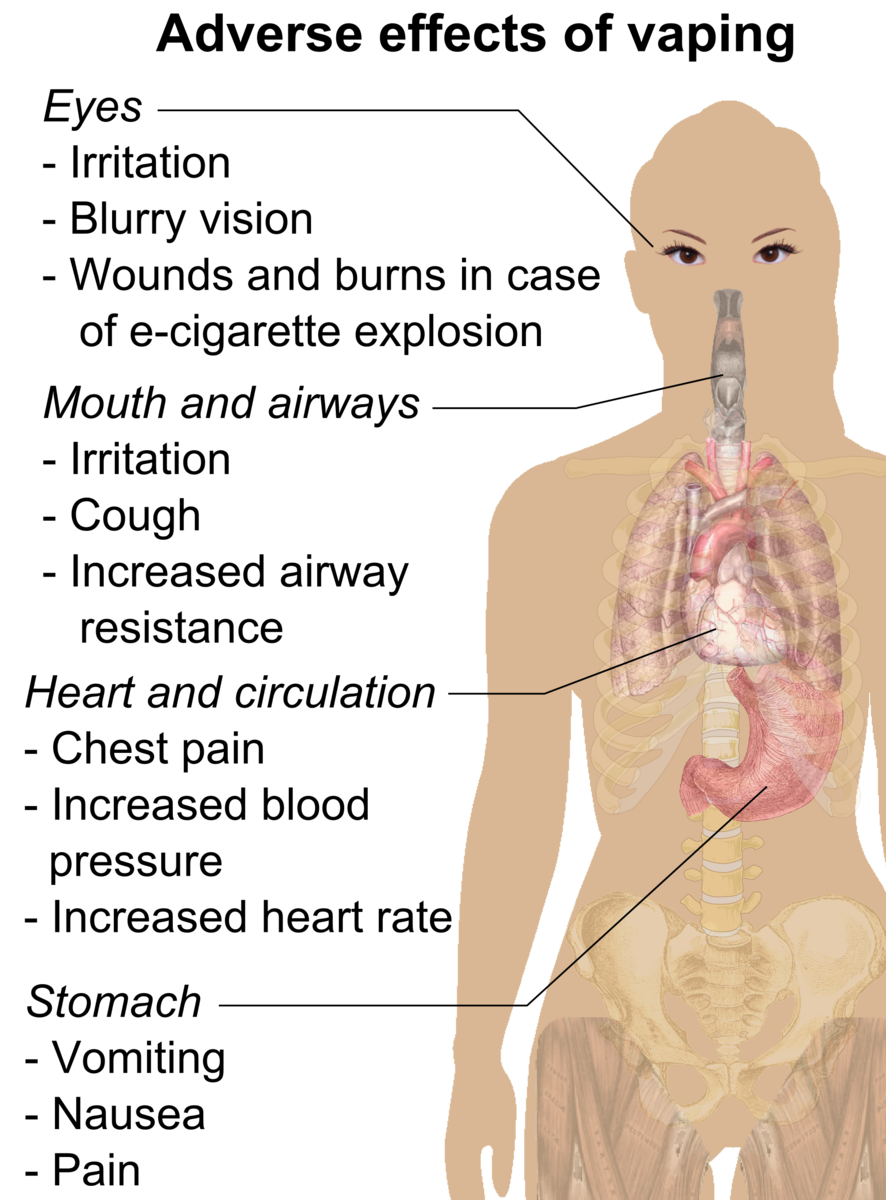 References of the image

There should be little doubt that not habitually inhaling nitrosamines and aldehydes is probably better than doing so. In the end, however, the suggestion is equivalent to "eating boiled steak is healthier than grilled steak" - for the very same plethora of chemicals that give flavor, but are the result of combustion - whether fine Turkish tobacco or Kobe beef. I'll still take mine rare and blackened, please.

Also, tempering the large research cited on Narusan-in-coma's answer with the thought that "vaping" has created a whole large group of younger people that would not otherwise "smoke" burning tobacco, the ultimate effects, as Narusan-in-coma points out, are not known. Nor is research at all simple, as most "vapor" folks will not vape Frutopia Fun Blend #7 for decades, inhaling god-knows-what flavoring chemicals, with repeated long-term exposure and dosing.

It can only be concluded that the combustion products are eliminated (or reduced by magnitudes). If those are considered Enemy #1, then one could make the leap to "healthier". But only with that assumption in place, and forsaking all others.

"Substitution" presumes a nicotine addiction already in place. The health effects of nicotine addiction by itself (without combustion and environmental factors) have not been proven or even justified well in my mind. In fact, tests in rats have shown that nicotine alone may not be addictive at all. Which right or wrong proves nothing.

I worked for many years with a renown DABT toxicologist, building devices to smoke cigarettes in a precise way, and deliver "precision" cigarette smoke to lab animals like rodents and lagomorphs. Not just for "cancer" type research, but psychology and performance physiology studies as well. In fact, the nicotine and tar content have to be measured constantly and accurately by tobacco companies, for the required labeling, since tobacco is a natural product and can vary from season to season. So I would say that I know a little something about this topic. Very very little.

A mere living will eventually lead to death. Of this, and only this, I am certain.

On Edit: Cites added to demonstrate some of the claims I made, and to comply with this stack's guidelines. Note that I am not trying to prove anything; I merely demonstrated a "path" to a conculsion of "healthier" (vaping vs. smoking) - with the provisio assumption that combustion products represent the bulk of the health risk compared to mere nicotene in water vapor. It is only with this grand assumption one could come to a "healthier" conclusion. The last cite is an interesting one that suggests the most meaningful "answer" to the OP question, within the framework of my assertions.

Summary source detailing the inconsistent results in animal testing demonstrating nicotene alone, devoid of other environmental factors, is addictive in of itself:

Effects of nicotine in experimental animals and humans: an update on addictive properties

Nicotine, a psychoactive component of tobacco, appears to play a major role in tobacco dependence, but reinforcing effects of nicotine have often been difficult to demonstrate directly in controlled studies with laboratory animals or human subjects: https://www.ncbi.nlm.nih.gov/pmc/articles/PMC2687081/

Sources alluding that aldehydes and nitrosamines are some of the most signifigant carcinogenic / COPD causal chemicals in burning tobacco:

... immediate regulation of the carcinogenic tobacco-specific nitrosamines 4-(methylnitrosamino)-1-(3-pyridyl)-1-butanone (NNK) and N’-nitrosonornicotine (NNN) in cigarette tobacco as a logical path to cancer prevention. NNK and NNN, powerful carcinogens in laboratory animals, have been evaluated as “carcinogenic to humans” by the International Agency for Research on Cancer. https://www.ncbi.nlm.nih.gov/pmc/articles/PMC4135519/

...reports, accompanied by huge media campaigns, stating that e-cigarettes generate many times higher levels of carcinogenic aldehydes compared to tobacco cigarettes. We have always responded that such findings were the result of severe overheating of the device, which the vapers identify and avoid. We have repeatedly referred to the dry puff phenomenon as an explanation of these findings...: http://www.ecigarette-research.org/research/index.php/research/research-2015/210-ald

11
Does 'vaping' affect your lungs?

10
E-cigarette. Making liquid vs. buying liquid
13
Effect of cigarettes on passive smokers
2
How many people have been instantly killed by smoking?
4
Does relighting a cigarette have a harsher effect on your health?
5
Does Nicotine cause Cancer?
5
It is well known that cigarette smoking makes Crohn's disease worse. Is it the nicotine or the toxins, or both?