Can individuals experience a 'pleasurable' form of psychosis?

From reading anecdotal stories of people with psychosis and schizophrenia online and meeting some people in real life suffering with them first hand, it seems that their experiences are always negative and range from moderately to severely distressing.

If psychosis is defined as a loss of contact from impaired thoughts and emotions then surely it should reason that there are people who experience delusions that are the opposite of distress i.e pleasure e.g being spied on by an attractive female government as opposed to a non-existent supernatural demonic entity.

Yes. This is an interesting question.

I can think of two examples, one which I think is closer to what you're thinking about, and another being related conceptually.

then surely it should reason that there are people who experience delusions that are the opposite of distress i.e pleasure

What you're describing, if it does occur, generally happens during the prodromal phase of schizophrenia, which is a period of one or two years prior to the first episode of florid psychosis. This is thought to be related to the hyperdopaminergic state that characterises the positive symptoms of schizophrenia e.g. hallucinations, delusions.

Although the lay view of dopamine's role is one relating to pleasure, it's generally thought to be related to incentive salience. The prodrome may describe the whole world as "lighting up" or "finally making sense". Oftentimes there can be metaphysical undertones.

From The Phenomenological Critique and Self-disturbance: Implications for Ultra-High Risk (“Prodrome”) Research:

A common finding in studies of the prodromal period has been of a developing preoccupation with philosophical, supernatural, and metaphysical themes. The rupture in “normal” self-experience motivates such a preoccupation; in cognitive terms, the patient is attempting to accommodate his anomalous experience to existing schemas. Feelings of centrality or solipsism may come to the fore.

And from Phenomenology of anomalous self-experience in early schizophrenia:

A classic is Knots (1970) by R.D. Laing who was both a psychiatrist and someone who experienced psychosis. I recommend getting a hold of it. It's very short and will make no sense. But it also will, and that's the entire point: 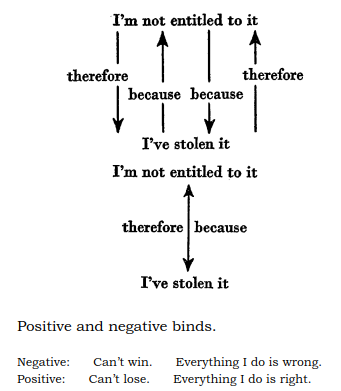 Psychosis and mystical experience are two antipodal human experiences but they both have something in common: they are both departures from our everyday experience of reality.

The following is from William James' The Varieties Of Religious Experience (1901) which is considered a classic:

Open any one of these, and you will find abundant cases in which ‘mystical ideas’ are cited as characteristic symptoms of enfeebled or deluded states of mind. In delusional insanity, paranoia, as they sometimes call it, we may have a diabolical mysticism, a sort of religious mysticism turned upside down. The same sense of ineffable importance in the smallest events, the same texts and words coming with new meanings, the same voices and visions and leadings and missions, the same controlling by extraneous powers; only this time the emotion is pessimistic: instead of consolations we have desolations; the meanings are dreadful; and the powers are enemies to life.

The point I am making here is that the "pleasurable form of psychosis" you are asking about is not called psychosis. It's called mystical experience. Claiming you have insight into the nature of reality will not be called psychosis if one displays minimal or no impairment, and if you can convince others that what you're experiencing is a reality of a type they are willing to entertain as existing. Even still, the presence of unpleasantness/impairment need to necessarily translate into a label of pathology.

From "Dark nights of the soul": Phenomenology and neurocognition of spiritual suffering in mysticism and psychosis: 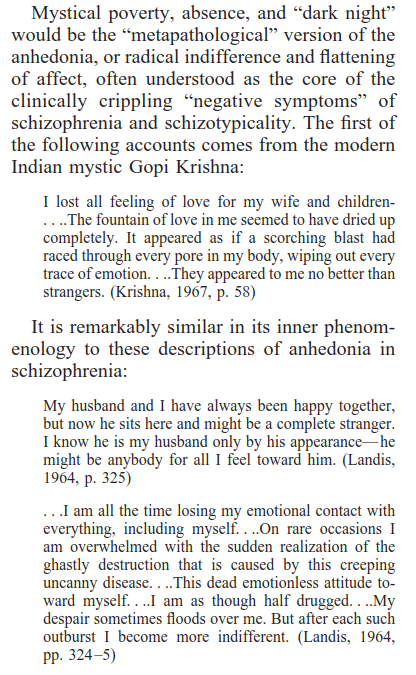 The similarity between psychosis and mysticism is an elephant in the room for religion and psychiatry. It's as though when they carved up their dominion over aspects of reality, psychiatry had to make some concessions. From DSM-V:

And of the experience itself, this is a description from Dostoevsky's The Idiot (1868), detailing what we would characterise as a mystical experience associated with epilepsy:

For several instants I experience a happiness that is impossible in an ordinary state, and of which other people have no conception. I feel full harmony in myself and in the whole world, and the feeling is so strong and sweet that for a few seconds of such bliss one could give up ten years of life, perhaps all of life.

I felt that heaven descended to earth and swallowed me. I really attained god and was imbued with him. All of you healthy people don't even suspect what happiness is, that happiness that we epileptics experience for a second before an attack.

To answer your question you need to break the psychology terms up into their components.

First of all let's look at Psychosis.

a loss of contact from impaired thoughts and emotions

the presence of delusions, hallucinations without insight, or both. (Arciniegas, 2015)

an abnormal condition of the mind that results in difficulties telling what is real and what is not. (source)

Psychosis is a symptom of certain mental disorders and not a disorder in itself.

A disorder is defined in psychology (emphasis mine) as a:

Because of the or in Bolton's definition you could assume that happiness/pleasure can be experienced whilst in a psychotic state, and there was a study on it.

When Pawel D. Mankiewicz et al. (2013) looked at happiness in severe mental illness, he found that

Psychosis did not appear to prevent individuals from experiencing happiness, although when associated with depression, life satisfaction was lowered.

Not the answer you're looking for? Browse other questions tagged mental-health brain psychiatrist-psychiatry or ask your own question.

1
What supplements/diet/activities can I do to improve mental function?
5
What can cause a visual disturbance followed by a headache?
3
Can thinking too much lead to brain damage?
0
Can any disease enhance Brain functioning instead of reducing it?
3
Can taking high doses of iodine every day cause psychosis?